The History of Harvard G-AZBN (FT391)

Perhaps one of the most original Harvard IIb’s – never having been fully restored, with low hours and having at one time been in a museum collection.

The Mk.llb was by far the most prolific of the Harvards, 639 of them being delivered to the Royal Air Force between May 1942 and December 1943. This mark was built under licence by the Noordyn Corporation in Canada as North American Aviation was by this time fully committed to production of the P-51.

Although taken on charge and allocated RAF serial numbers, large numbers of Mk.llb aircraft remained in store. In 1946, steps were taken to reduce this number and many were handed over by the RAF to various newly liberated European Air Forces. In August of that year, 116 unused aircraft were handed over to the Dutch Air Force. Between April and June 1947, eight aircraft went to Denmark and between April and May of 1949, eighteen went to France. More went to Belgium, Norway and Holland.

Between August 1946 and November 1948, 193 airworthy Harvards were handed over to the Royal Netherlands Air Force with an additional 7 as a source of spare parts. Of the total, 50 (subsequently B-151 to B-200) were shipped direct from Canada after service with Flying Training Schools of the Commonwealth Air Training Scheme. A few came from South Africa, but at least 115 of the remainder had seen no previous service, having spent a number of years stored in various maintenance units.

The aircraft was allotted this registration by the Royal Netherlands Air Force in October 1947. She remained on charge until 1970.

After being taken off charge, B-97 acquired the Dutch civilian registration on 10th July 1970, to a Mr C.Honcoop of Veen. (As a matter of interest, PH-HTC allotted to ex B-158 was also reserved for Mr.Honcoop but was not taken up. This aircraft was subsequently registered G-BBHK (FHl53) later owned by Robs Lamplough at Duxford.) 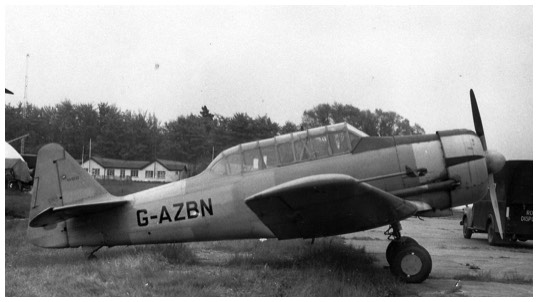 G-AZBN – The Dutch registration was cancelled on 8th July 1971. On the 13th July she was registered G-AZBN to Sir W.J.D.Roberts of Shoreham (later of Strathallan) A C of A was issued on the 18th January 1972.

Civilianisation, including the application of U.K. civil registration letters, was carried out by Shoreham Aviation Services Ltd. The paint scheme which she now carries, i.e. as RAF FT391, was applied in 1978. G-AZBN spent a number of years as part of the Strathallan Collection in Scotland. 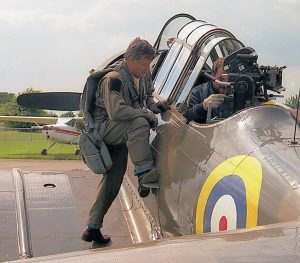 G-AZBN was also operated by the Old Flying Machine Company at Duxford. Notably during her time with the OFMC, she was used in number of filming projects including the TV series “Piece of Cake”. For this purpose, the rear canopy was removed and a camera installation together with a rear facing cameraman installed to film the many dog fight scenes. The rear fin appears in many shots but being in camouflage, only the antenna gives G-AZBN away. 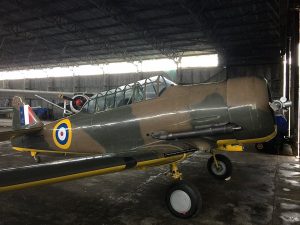 2018 – Today she is operated as part of a classic collection of radial aircraft based at Goodwood and often seen at fly-ins and air shows, occasionally performing displays flown by Richard Piper. The picture on the right was taken in 2018 at the West London Aero Club after BN was damaged when static during bad weather in 2016.