The below accounts of combat use by the T6 are remarkable and are a testament to the flexibility of this advanced trainer and of course the pilot. I would go as far as to say that this trainer was so advanced that it only fell short by a few points of entering World War 2 as a fighter

During the Korean War and, to a lesser extent, the Vietnam War, T-6s were pressed into service as forward air control aircraft. These aircraft were designated T-6 “Mosquitos”. Designated the T-6G, the Texan saw major improvements in increased fuel capacity, an improved cockpit layout, as well as a steerable tailwheel. U.S. Air Force and U.S. Navy forces in the Korean War modified the Texan under the LT-6G designation and employed it in battlefield surveillance.

In 1955, Argentine Army SNJ-4’s were dispatched to attack government troops on June 16 during the Revolución Libertadora and one was shot down by a loyalist Gloucester Meteor. On November 18, 1963, Argentine Navy SNJs attacked a loyalist column. Argentine Navy SNJ-4s were also were used by the Colorado rebels in the 1963 Argentine Naval Mutiny, launching attacks on the 8th Regimiento de Caballería de Tanques on April 2 and 3, knocking out several M4 Sherman tanks but losing one SNJ to anti-aircraft fire.

The Royal Hellenic Air Force employed three squadrons of British and American supplied T-6D and G Texans for close air support, observation, and artillery spotting duties during the Greek Civil War, providing extensive support to the Greek army during the Battle of Grammos. Communist guerillas called these aircrafts “O Galatas” (“The Milkman”), because they were flying very early in the morning. After the “Milkmen”, the guerillas waited for the armed Spitfires.

No. 1340 Flight RAF used the Harvard in Kenya against the Mau Mau in the 1950s, where they operated with 20 lb bombs and machine guns against the gangs. Some operations took place at altitudes around 20,000 ft above mean sea level. A Harvard was the longest-serving RAF aeroplane, with an example, taken on strength in 1945, still serving in the 1990s (as a chase plane for helicopter test flights—a role for which the Shorts Tucano’s high stall speed was ill-suited).

France and the Algerian war 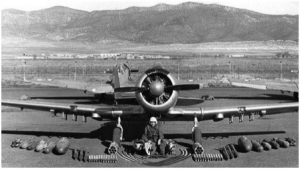 Left– The picture above shows a french T-6G2 from EALA 2/72 taken in Batna (Algeria) between spring 1958 and 1959. The planes are painted aluminium with no rudder national colours and no fuselage roundels. These type of markings being introduced gradually from the spring of 1958. The French AF roundels can be seen on the wings of both T-6s in the background and the pilot presents the EALA’s insignia in front of him. As many T-6 were sold to foreign nations involved in COIN operations in the sixties, it’s possible that this one went to Portuguese AF. But unfortunately, no serial number is visible, so this particular T-6 cannot be identified as cannot be his later fate. (Caption by Hervé Barbon)

The T-6G was also used in a light attack or counter-insurgency role by France during the Algerian war in special Escadrilles d’Aviation Légère d’Appui (EALA), armed with machine guns, bombs and rockets. At its peak, there were 38 EALAs active. The largest unit was the Groupe d’Aviation Légère d’Appui 72, which consisted of up to 21 EALAs. From 1961 to 1975, Portugal, also, used hundreds of T-6G in the counter-insurgency role during the Portuguese Colonial War. During this war, almost all the Portuguese Air Force bases and airfields in Angola, Mozambique and Portuguese Guinea had a detachment of T-6Gs. 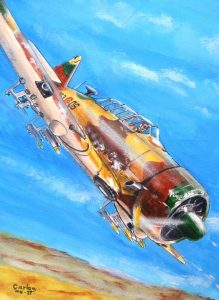 The Original Painting, due to the elements, has numerous chips which allow the aluminium to be seen from its original finish. He is conducting, as a tactical fighter, an attack on vehicles and enemy positions with machine guns and rockets

In 1957-58, the Spanish Air Force used T-6s as counterinsurgency aircraft in the Ifni War, armed with machine guns, iron bombs and rockets, achieving an excellent reputation due to its reliability, safety record and resistance to damage.

20 AT-6 Texans were employed by the 1st and 2nd fighter squadrons of the Syrian Air Force in the 1948 Arab-Israeli War, providing ground support for Syrian troops, and launching airstrikes against Israeli airfields, ships, and columns, losing one aircraft to anti-aircraft fire. They also engaged in air to air combat on a number of occasions, with a tail gunner shooting down an Israeli Avia S-199 fighter.

The Syrian Air Force T-6 Texan of the 1st Fighter Squadron, serial number 206, in which Sergeant al-Abed and First Mechanic Muhi al-Din Wadi shot down an Avia S.199 flown by a South African mercenary pilot, Lionel Bloch, over Qunaytra on July 10, 1948. This was the first time that a Syrian aircraft had shot down an enemy plane in combat. Six days later this same Texan was brought down by Israeli ground-fire over Ayelet Ha’Shakhar, killing its crew. On the other hand, it is possible that the Texan suffered a catastrophic structural failure while pulling out of its strafing dive. Since First Mechanic Muhi al-Din Wadi had been mortally wounded by gunfire from the IAF Avia on July 10, the Texan must itself have suffered some damage. Perhaps the repairs carried out at the grass airstrip of Istabl were inadequate.

Around 550 S-199s were built, including a number of conversion trainers designated CS-199 (armed) and C-210 (unarmed). The first flight took place in March 1947, and production ended in 1949. The last examples were withdrawn from Czechoslovak service (with their National Security Guard) in 1957.

The Pakistan Air Force used T-6Gs in the 1971 war as a night ground support aircraft hitting soft transport vehicles of the Indian army. In the early hours of 5 December, during a convoy interdiction mission in the same area, Squadron Leader Israr Quresh’s T-6G Harvard was hit by Indian anti-aircraft ground fire and a shell fractured the pilot’s right arm. Profusely bleeding, the pilot flew the aircraft back with his left hand and landed safely.

The World War II vintage prop-engined trainers were pressed into service and performed satisfactorily in the assigned role of convoy escorts at night. 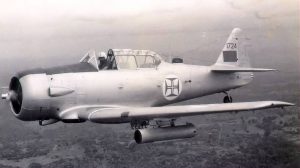 From 1961 to 1975, Portugal used more than a hundred T-6Gs, also in the counterinsurgency role, during the Portuguese Colonial War. During this war, almost all the Portuguese Air Force bases and airfields in Angola, Mozambique, and Portuguese Guinea had a detachment of T-6Gs.

T-6s remained in service, mainly as a result of the United Nations arms embargo against South Africa’s Apartheid policies, with the South African Air Force as a basic trainer until 1995. Some Harvard’s were armed with .303 Browning machine guns in each wing. Rocket’s (3″ No1, Mk1), Matra Type 122 launcher with 68mm SNEB rockets, or Matra Type 361 launcher with 37mm SNEB rockets, 8 x 20 lb bombs. This mod was known as Phase 4 which was introduced in 1962.

A Type 83A reflector site was also fitted. 65 Harvard’s (Mk11A’s) were also fitted with F24 cameras, some were fitted with an oblique installation and the others vertically. We have both versions oblique and vertical at the club. The vertical installation had a bay with opening doors, underneath the fuselage behind the rear seat that opened when photography was required. the oblique cameras were fitted in the baggage compartment. Information from Geoff Timms 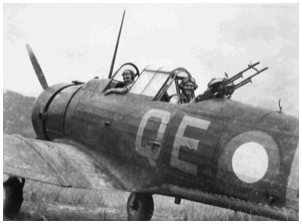 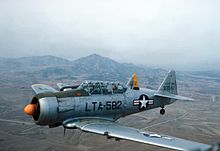 The first comprehensive airborne forward air controller program was developed in Korea. Two weeks into the Korean War, the need for forward air control was starkly apparent, a powerful North Korean offensive was advancing so rapidly that the locations of the invaders could literally change hourly. US F-80 Shooting Stars flying from Japan had barely enough range to dump their bombs and turn back to base. Tactical Air Control Parties struggled to direct the air effort but found their powers of observation limited by rugged terrain, near horizons, and an ever-shifting tactical situation.

Once again, there are dual and non-contradictory tales of the FAC startup effort. Lieutenant Colonel Stanley P. Latiolas, operations officer of the Fifth Air Force that was operating in Korea, suggested having a slower aeroplane spot targets for the fuel-hog jets. Colonel John R. Murphy, who knew of the success of the Horseflies, asked the Commanding General of the Fifth Air Force, Earle E. Partridge for five pilots to fly reconnaissance.

On 9 July 1950, Lieutenants James A. Bryant and Frank G. Mitchell flew the first FAC missions of the Korean War from K-5 Taejon Air Base. They flew into K-5 with two L-5G Sentinels modified with VHF radios but were unable to get the radio to work. Borrowing two 24th Division L-17s, the lieutenants – working under callsigns “Angelo Fox” and “Angelo George” (the Joint Operations Center being called “Angelo”) – called down about 10 flights of F-80s resulting in what Lt. Col. John R. Murphy called “the best day in Fifth Air Force history.”

The following day saw the first use of a T-6 Texan for a FAC plane. During the direction of RAAF P-51 Mustangs, the T-6 radio became unserviceable. The FAC continued indicating targets by flying over them and rocking his wings. The resulting strikes were the first of many successful attacks made without radio contact, as United Nations bombers operated on many non-compatible radio frequencies. The T-6 became the standard FAC aircraft for Korean use; several of the smaller, slower liaison planes were shot down by North Korean Yaks (including 6 L-17s lost to enemy air action) and they were retired.[46] Fifth Air Force also turned to higher performance aircraft for the FAC mission. P-51 Mustangs and F4U Corsairs were used to penetrate enemy air space after it had become too hazardous for T-6s.

The two original FACs had switched to a T-6 and promptly flew a sortie directing airstrikes by P-80s that knocked out 17 North Korean tanks near Chonui. The T-6 Texan was such an obvious success for directing airstrikes that an ad hoc forward air control unit began to coalesce; it would become the 6147th Tactical Control Group nicknamed the Mosquitoes. More T-6s and more pilots were acquired.[48] The 6147th TCG became one squadron working as three-man Tactical Air Control Parties in radio jeeps, and two squadrons of aerial forward air controllers. C-47s were also used by the group as Airborne Command and Control Centers.

Although the T-6 entered the FAC role as a “hot” aircraft, it was soon encumbered with numerous adaptations that degraded its performance. A belly tank was added to extend its range. Both members of the crew wore complete survival gear, and the plane was loaded up with smoke grenades. Eventually, a dozen smoke rockets were added under each wing for marking targets. With half a ton of added weight, the T-6 was limited to a top speed of 100 mph (160 km/h), and its service ceiling was considerably reduced. The lower performance was not the only detriment to the T-6’s role in forward air control.

It is a low-wing monoplane; consequently, the plane often had to be flown tilted to one side for visibility.[48] However, the Texan’s ruggedness, easy maintenance, and ability to operate from small rough airfields outweighed the disadvantages.[50] The 6147th tested the L-19, later known as the O-1 Bird Dog. The L-19 offered no better performance than the Texan and was unarmored. It was rejected because of its vulnerability to ground fire.[48] There was also an abortive attempt to use the L-17 Navion as a FAC aircraft. The Navion’s low wing design precluded any success in observation.

During 1950, the 6147th Tactical Control Group operated as far as 50 miles into enemy territory, using relay aircraft to remain in radio contact. The Mosquitoes proved their worth by directing the limited number of airstrikes against the most important enemy targets, optimizing the United Nations firepower.