Canadian Car and Foundry (CC&F) also variously known as “Canadian Car & Foundry,” or more familiarly as “Can Car,” manufactured buses, railroad rolling stock and later aircraft for the Canadian market. CC&F history goes back to 1897, but the main company was established in 1909 from an amalgamation of several companies and later became part of Hawker Siddeley Canada through the purchase by A.V. Roe Canada in 1957.

Canadian Car & Foundry (CC&F) was established in 1909 in Montreal as the result of an amalgamation of three companies. In 1911 the CC&F Board of Directors recognized that the company could improve its efficiency if they were able to produce their own steel castings, a component that was becoming common to all their products. They purchased Montreal Steel Works Limited at Longue Pointe, QC, the largest producer of steel castings in Canada, and the Ontario Iron & Steel Company, Ltd. at Welland, which included both a steel foundry and a rolling mill.

Buses were produced at Fort William, Ontario and railcars in Montreal and Amherst. Streetcars were manufactured between 1897 to 1913, however the company focused exclusively on rebuilding existing streetcars after 1913.
A few years later, CC&F acquired the assets of Pratt & Letchworth, a Brantford, ON, rail car manufacturer. In the latter part of World War I, the expanding company opened a new plant in Fort William (now Thunder Bay) to manufacture rail cars and ships which included the French minesweepers Inkerman and Cerisoles which were both lost in Lake Superior; the Amherst plant started by Rhodes & Curry in Amherst was closed in 1931. In an attempt to enter the aviation market, CC&F produced a small series of Grumman fighter aircraft under licence and developed an unsuccessful, indigenous-designed fighter aircraft, the Gregor FDB-1.

By 1939, with war on the horizon, Canadian Car & Foundry and its Chief Engineer, Elsie MacGill, were contracted by the Royal Air Force to produce the Hawker Hurricane. Refinements introduced by MacGill on the Hurricane included skis and de-icing gear. When the production of the Hurricane was complete in 1943, CC&F’s workforce of 4,500 (half of them women) had built over 1,400 aircraft, about 10% of all Hurricanes built.

As male enlistment increased during the war, the Canadian Car & Foundry hired and trained a greater number of female employees. Representing the wartime contributions of women who left traditional ‘female’ occupations to work in the public sphere, the female workers in the factory took on welding, precision drilling, riveting, sub-assembly of instruments and inspection. These technical contributions and changes in labour trends were guided in part by the aeronautical engineer Elizabeth Muriel Gregory ‘Elsie’ MacGill, a person of national historic significance, who oversaw the company’s first original design for the Hawker Hurricane. The period saw women gain valuable skills and confidence, earn financial independence, and helped to demonstrate that women could do non-traditional jobs. Following the success of the Hurricane contract, CC&F sought out and received a production order for the troublesome Curtiss SB2C Helldiver. Eventually, 834 Helldivers were produced by CC&F in various versions from SBW-1, SBW-1B, SBW-3,SBW-4E and SBW-5. Some of the Curtiss divebombers were sent directly to the Royal Navy under Lend-Lease arrangements.

CC&F also built the North American AT-6 Texan/Harvard under licence, many of the aircraft being supplied to European air forces to train post war military pilots. In 1944, the Canadian Car & Foundry built a revolutionary new aircraft in its Montreal shops – the Burnelli CBY-3, also called the Loadmaster. There were two examples built of an aerofoil-fuselage design originally developed by Vincent J. Burnelli. The CBY-3 was never to enter full-scale production and was cancelled less than one year later. 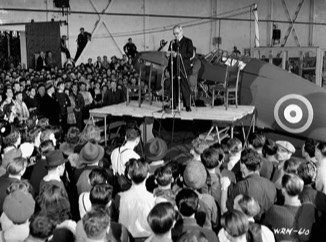 During World War Two C.D. Howe, Minister of Supply and Munitions, was pivotal in expanding the Canadian aviation industry. Here are a few pictures of a visit to the Canadian Car and Foundry factory in Fort William, Ontario. Forget all the people and just enjoy the Hurricanes. (Photos courtesy of the National Film Board of Canada/Library and Archives Canada.)

By the time war broke out, the Royal Canadian Air Force (RCAF) had nineteen Hurricane Mk Is on strength, these having been the subject of an order (for twenty) placed before hostilities commenced. After negotiations a further Mk I (L1848) was sent by Hawker Aircraft to Canadian Car & Foundry (CC&F) along with complete plans on microfilm for production of Hurricane Mk Is powered by British Merlin III engines shipped from England to Canada. Since the Hurricane Mk I was likely to continue development, Hawker requested that an adequate gap in Mark Numbers be left to allow for further British designations, and consequently CC&F produced Hurricanes beginning with the Mark X designation. Canadian production went so well that the first Canadian produced Hurricane Mk I was delivered only a year after the pattern aircraft was shipped.

After the Second World War, the CC&F returned to its roots as a rail car manufacturer. They also made a successful leap into the streetcar business, supplying Montreal, Toronto, Regina, Calgary, Vancouver, Edmonton, and the Brazilian cities of Rio de Janeiro and São Paulo with various types of streetcars.

The company concluded a licensing agreement with ACF-Brill (the successor to J. G. Brill) in 1944 to manufacture and sell throughout Canada buses and trolley coaches of ACF-Brill design as Canadian Car-Brill, in later years often written “CCF-Brill”, for short. CC&F built 1,114 trolley buses and a few thousand buses under the name. Trolleybus production ended in 1954; Edmonton Transit System’s No. 202, a 1954 CCF-Brill T48A, was the very last Brill trolleybus built for any city.

Canadian Car & Foundry was designated a national historic site of Canada in 2008 because:- here, at the main plant of Canada’s largest aircraft manufacturer during the Second World War, thousands of men and women expertly constructed 1, 451 Hawker Hurricanes for the British Royal Air Force and the Royal Canadian Air Force, and 835 Curtiss Helldivers for the American Navy, thereby expanding the Allied forces’ air strength; ten percent of the world’s production of the reliable and long-serving Hurricane, an aircraft that played a pivotal role in winning the Battle of Britain, were built here