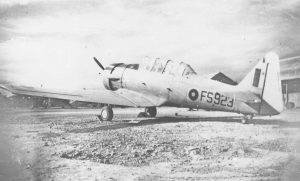 1340 Flt was first formed c1945 at the Indian Air Force base at Sulur, Kerala State, India. It was equipped with three Vultee Vengeance Mk. IIIs and a Harvard IIB.

The flight was formed to carry out trials of mustard gas attacks for the Chemical Defence Research Department (India) (CDRD, now at Porton Down, Wiltshire), in preparation for expected similar attacks by the Japanese, who had already used it during the Second Sino-Japanese war. The flight was nominally under the control of 225 Group in Bangalore, part of Air Headquarters, RAF India, but flew under the direction of CDRD. (Photo supplied by Martin Pengelly)

The Vengeances dropped 65-lb canisters and 500 lb clusters of mustard gas, and also sprayed it on Indian troops on the ground to test anti-gas protection such as gas capes and footwear. The unprotected troops, who may have been unaware of the danger, suffered many burns and blisters.

The flight transferred to from Sulur to Cannonore (Kannur), Kerala State on 11 October 1945, where an airstrip was created on the maidan, a large public area overlooking the sea. There were two trials ranges, at Kumbla and Porkal, situated on the coast approx 40 miles (65 km) N. of Cannanore. Further chemical weapons trials continued until February 1946 when the surplus stocks of gas were dumped at sea. 1340 Flt disbanded on 31 March 1946. (Photo supplied by Martin Pengelly)

On 5 December 1945 W/Cdr Edmondes took off solo in his Harvard (FE965) to make a reconnaissance round the Porkal area. His engined failed, and he made a successful forced landing in a paddy field about 10 miles inland. He was unhurt.

The flight was re-formed on 23 March 1953 as No. 1340 Flight RAF at RAF Thornhill,  Gwelo, Southern Rhodesia (now Gweru-Thornhill Air Base, Zimbabwe), in response to the Mau Mau uprising in neighbouring Kenya. The Harvard IIB aircraft came from No. 5 Flying Training School RAF (3rd Formation) based at Thornhill, part of the Rhodesian Air Training Group.  The Harvards had been previously temporarily based at No. 4 Flying Training School RAF at RAF Heany, near Bulawayo.(Photo supplied by Martin Pengelly)

Mau Mau uprising- The Mau Mau uprising occurred because native Kenyan cattle farmers, predominately the Kikuyu, Embu and Meru people, had been progressively pushed off their ancestral grazing lands by white settlers since 1902.

The situation was made more complex because the Kikuyu were divided into anti-colonial protesters and pro-British sympathisers. Much of the air activity took place in the forested areas around Mount Kenya and the Aberdare Range north of Nairobi, where the Mau Mau fighters were hiding out. 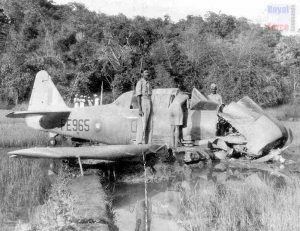 On 5th December, W/Cdr Edmondes took off solo in his Harvard FE965 to do a reconnaissance round the Porkal area. I’m not clear as to the purpose, perhaps to look for additional areas which might be suitable for the CDRE. He went off about 8.30, and we expected him back in two hours at the outside. (Of course, he would be out of R/T range as soon as he was out of sight). Two hours passed, then three, then four, with no sign of him. By this time he must be out of fuel. Things were looking serious.

The W/Cdr had been found, his engine had failed, he was unhurt after a successful forced landing about 10 miles inland. The local Police had picked him up and driven him back to Porkal: he’d simply walked in there. Porkal had signalled the CDRE, they rushed over to tell us just as Alex was climbing in. Search cancelled, all go home. I signalled Group to stand down.

The W/Cdr came back by road, rather quiet and a bit cagey about the affair. As far as I know, there was no investigation of the cause of the failure. The S.O.P. was that the aircraft was immediately struck off my charge and transferred to the Repair and Salvage Unit for the area.

Although it was not seriously damaged, they would have to dismantle it to get it out, and it was simpler to scrap it. The war was over, the Harvard had never been essential to CDRE’s operations even while it was still on. Needless to say, they didn’t give us another one ! I thought it a bit strange. The Wasp was renowned as an extremely reliable engine. In my time on them at Advanced School in the US, I don’t think I ever heard of one failing. One possibility was fuel contamination. Our supplies came in 40-gallon drums, but of course it was all filtered before decanting into the bowser or directly into the aircraft. The filter was a big square open metal box with what looked like a bit of blanket across the bottom.

Rough and ready it looked, but it was sobering to see the amount of rust, grit and (condensed ?) water which collected in the blanket. If by mischance some of that had got through…? As I’ve said, that aircraft was little used, but the tanks were never left part full to avoid the risk of condensation in the empty spaces.