The wartime history of USAAF North American AT-6A 41-0234 is not clear. By 1947, Dori Marland owned it, who would race the Texan in the Halle Trophy Race at the Cleveland National Air Races. Her heavily modified T-6 used a Ranger V-770 inverted V-12 engine, and the cockpit sheet metal was reworked into a single seat. A Hollywood actress who had set aside her film career to become a WASP, Dori Marland, suffered an engine problem, and the T-6 was damaged on landing. Dori survived but retired from air racing after the incident. It seems that she ran out of gas. The late Gordon Harris of Ft Worth, Texas recounts on pages 63-64 of the TWA TARPA TOPICS for November 1998, that he helped prep R49 @ KC, Kansas in 1947.  R49 had a 20-gallon reserve tank in the left-wing. When the crashed R49 was inspected, there were 20 gallons of gas still available. Dori had moved the fuel selector to the left tank but selected “reserve.” 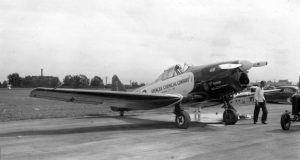 In 1948, another WASP and Captain in the Air Force Reserve, Betty Clark, took over the T-6, finishing in fourth place of the Kendall Trophy Race. N61269 is seen here, post-racing career with some sort of rear seat added back in. This livery can be dated to the late ’50s when it was still flying. 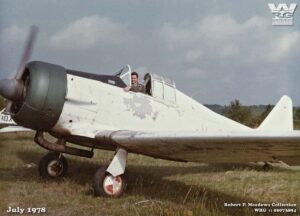 Courtesy of those lovely people at Warbird Information Exchange (one if not the best Warbird forum online), SNJ-4 Bu09985 and now N55941. First registered as NX55941, it was converted into a streamlined single-seat racer for lady pilot Helen McBride for the National Air Races at Cleveland in 1949. Modified again as a single-seat agricultural aircraft, it was used from 74 to 77 flying from Greensboro, New Jersey.
THEN, it converted into a Zero replica and is now rebuilt and flying again in stock condition as N55941. Martin Pengelly 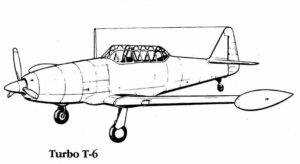 In 1965, the Brazillian Air Force planned to upgrade their fleet of T-6s by installing a Turbomeca Bastan turboprop upfront. The project was named ‘Fenix’ and was led by Frenchman Max Holste, the Broussard, Nord 262 and Banderiante. But serious problems were encountered with the CofG, and the project was duly cancelled in 1965. All resources developed the Neiva T-35 Universal, which replaced the T-6 in Brazil. Martin Pengelly 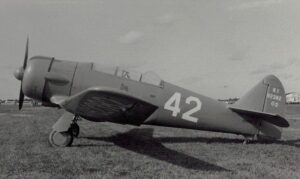