“FLYING IN THE SLIPSTREAM OF HEROES”

At T6 Harvard Ltd, we coined the phrase “Flying in the slipstream of heroes” because we believe in preserving history, especially WW2 aviation history and playing this history out in the air. What better way to honour our heroes than by flying from former WW2 airbases steeped in history, flying in the same airspace where the action took place?

RAF Fowlmere is one of the Iconic Airfields of the Battle of Britain, and we are proud to offer our Battle of Britain experiences from the hallowed turf of this most important and historical airfield.

We believe in the fully immersive aviation history lesson taught above ground in the air. You can certainly read about dog fighting in books, but taking off in an authentic warbird and experiencing the g, the smell of petrol and oil in the same airspace as those heroes that went before us is just magical.  Fowlmere is one of those places you can visit and, with some imagination, transport yourself back in time as you stand on that hallowed turf where pilots such as Johnnie Johnson scrambled to their Spitfires!

Why is Fowlmere so important to us at T6 Harvard Ltd: AJ 841 has a connection with Fowlmere as she saw service with 154 Squadron. Originally 154 Squadron were based at RAF Fowlmere before deploying to the Middle East in 1942. Record cards for 154 Squadron show the squadron Harvard (AJ841 Wacky Wabbit) being flown by flying officer DC Dunn from Minnigh (Syria) to Ramat David (Palestine) on the 12th of February 1944. So for us at T6 Harvard Ltd, the Wabbits codes and colours represent the Fowlmere based 154 Squadron ‘hack’ they would have used in the desert.

Fowlmere’s life can be divided into two main parts. That under the RAF as a Battle of Britain era airfield and that of the USAAF for which Fowlmere would achieve a remarkable number of aviation firsts and combat records. But whatever its achievements, its wartime life was dogged by bad weather, particularly rain! Poor drainage and heavy water logging left it unusable for large periods, inhospitable and rather bleak with poor accommodation; it was not a noteworthy ‘curriculum vitae’ for a prestigious fighter airfield. It is one of those airfields that took a long time to reach an honorary status; being home to many RAF units, most for short assignments only, it was rarely in the spotlight. In total, it would be home to some 17 operational RAF squadrons,  a small number of training squadrons and one USAAF squadron. A rather high number for any second world war station.

Initially built as a First World War airfield, it opened on October 1st 1916, a small number of buildings were erected, including six hangars, and the runways were grass. It remained operational until the early 1920s when the buildings were demolished and the land reused. 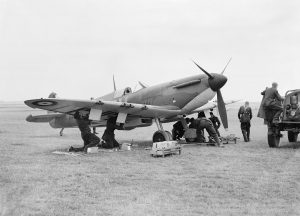 Right – A Supermarine Spitfire Mk 1 of No. 19 Squadron RAF being re-armed between sorties at Fowlmere, near Duxford, September 1940.

With the next threat of an invasion looming, the defence of Britain was paramount. Fowlmere was then identified as a suitable site for a satellite to nearby Duxford, and Spitfires began to arrive from 19 Squadron. 19 Squadron would ‘yo-yo’ between Duxford and Fowlmere between June 1940 and August 1941, operating the Spitfire I,  IB and IIA in the process. These crews would operate as part of the Duxford Wing in the Battle of Britain, where 19 Squadron would gain notoriety. 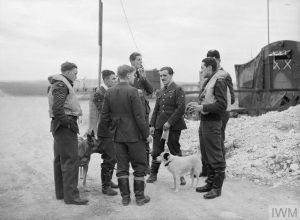 Left – Spitfire pilots of No.19 Squadron RAF discuss a recent sortie (mission) at Manor Farm, Fowlmere, near Duxford, September 1940. The tall pilot at the back is Hugh ‘Cocky’ Dundas, who wrote a book about his experiences after the war – Flying Start. The pilot with the moustache is Harry Steere, who was decorated for bravery before the battle began. He was killed, aged 30, on 9 June 1944 – three days after D-Day. Unlike many photographs taken at airfields during the Battle of Britain, this is not believed to be staged.

In Spring 1940, a satellite landing ground for Duxford was prepared around Manor Farm, this time on the west of the B1368 looking north. This second incarnation designated Fowlmere simply as airfield G1 and later WA1. From 1 July, Spitfires of 19 Sqn, RAF was detached here with crews using tented accommodation plus several Nissen huts throughout the Battle of Britain period. These Spitfires were remarkable for including some of the first cannon-armed models; constant blockages restricted their use in the Battle. One newly-trained member of 19 Sqn to visit Fowlmere was ‘Johnnie’ Johnson, later to become the RAF’s top-scoring ace. Defiant fighters of 264 Sqn and Hurricanes of the Czech 310 Sqn were also based here briefly in July and the autumn, respectively. 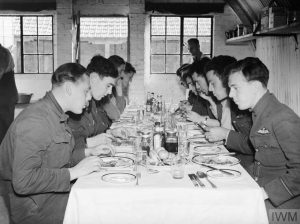 Right – Pilots of No. 19 Squadron RAF eat lunch in the Officers’ Mess at Fowlmere in September 1940. Conditions at Fowlmere were much more primitive than Duxford and could be uncomfortable for pilots and ground crew, who lived in tents or basic huts.

Following significant losses over France and southern England, the Boulton Paul Defiant was withdrawn from front-line operations and pulled back to perform in ‘secondary’ duties. Part of this meant a short stay at Fowlmere in July 1940 for 264 Squadron who were in transit to Kirton-in-Lindsey whilst carrying out night-fighter duties.

After their departure, there was a silence at Fowlmere, only broken by a short five-day stay by the Hurricane IIBs of 133 Squadron whilst moving between Collyweston and Eglington. Noted for their twelve .303 machine guns and Merlin XX engines, first used in the Hurricane IIA, it used a mix of 30% glycol and 70% water. Using this mix made the fuel mixture safer and meant the engine would run much cooler, thus giving it a longer life. Further examples of this aircraft would return later in the summer of 1942 with another squadron, 174 Sqn, also whilst transiting, but this time from and back to their main station at RAF Manston.

Duxford’s detached fighters were active throughout the Battle, especially on 31 August when the aerodrome was bombed, although most of the attackers’ bombs finished up along the nearby railway line. Duxford and Fowlmere were protected by 3” anti-aircraft artillery based at Thriplow and Bofors guns on the former airfield. After the Battle, Fowlmere ceased to be simply an overspill for Duxford and units were now based here directly. American units have long been associated with the airfield, which was typified by the basing of Hurricanes of 133 (Eagle) Sqn RAF, comprising US volunteers, for a few days in October 1941. 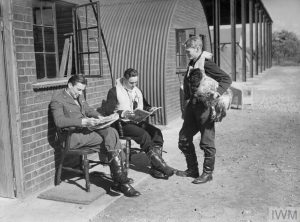 Left – Pilots of No.19 Squadron relax between sorties outside their crew room at Manor Farm, Fowlmere, near Duxford, September 1940. Left to right: Pilot Officer Wallace Cunningham, Sub-Lieutenant Arthur Blake and Flying Officer Francis Brinsden. Blake was a Royal Navy Fleet Air Arm (FAA) pilot with No.19 Squadron and was killed in combat in October 1940.

In June 1942, the dummy superstructure of HMS Kelly was built on the airfield as part of a film set. It was filmed being attacked by a Ju 88 of Duxford’s 1426 Enemy Aircraft Flight for incorporation in the propaganda film In Which we Serve. 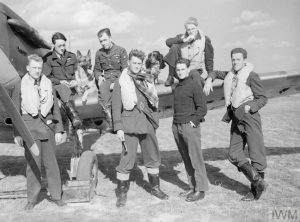 Right – Pilots of No. 19 and No. 616 Squadrons pose by a Spitfire. On the wing (left to right) are Brian Lane, ‘Grumpy’ Unwin and Francis Brinsden – with Flash the Alsatian and Rangy the Spaniel. In front of the wing are Bernard Jennings, Colin MacFie, Howard Burton and the American volunteer Philip Leckrone. Lane, Burton and Leckrone did not survive the war. MacFie was shot down and captured in July 1941.

With the 411 (Canadian) Sqn deployment, Fowlmere played a key part in the preparation for D-Day. Operation Spartan was a major exercise held between 1 and 12 March 1943. It involved British and Canadian forces and was conducted across southern and central England to test various procedures and tactics. The attackers, Z force, started in Southland (a notional bridgehead around Southampton), attacking X Force (German) in Eastland (just to the west and north of London) via neutral Westland (Salisbury Plain). Ten divisions were involved, including four armoured. Each side was allocated a nineteen squadron air force, 411 Sqn being part of the X force. From the experience gained, the RAF 2nd Tactical Air Force was formed with composite groups and self-contained mobile wings based around one airfield.

With the eruption of the Second World War, Fowlmere was intended to be a satellite for RAF Fighter Command at nearby RAF Duxford and was used by 19 Squadron with Supermarine Spitfires along with: 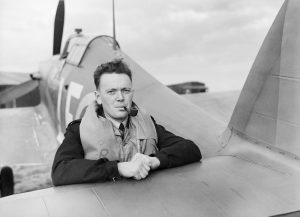 Left – Flight Lieutenant P S Turner of No. 242 Squadron RAF rests on the tail elevator of his Hawker Hurricane Mk I after landing at Fowlmere, near Duxford in Cambridgeshire, September 1940.