“Flying in the slipstream of heroes”

At T6 Harvard Ltd, we coined the phrase “Flying in the slipstream of heroes” because we believe in preserving history, especially WW2 aviation history and playing this history out in the air. What better way to honour our heroes than by flying from former WW2 airbases steeped in history, flying in the same airspace where the action took place? We believe in the fully immersive aviation history lesson taught above ground in the air. You can certainly read about dog fighting in books, but taking off in an authentic warbird and experiencing the g, the smell of petrol and oil in the same airspace as those heroes that went before us is just magical.  Peterborough Conington, formerly RAF Glatton, is one of those places you can visit and, with a bit of imagination, transport yourself back in time as you look down the original runway where Bombers of the 457th flew from and many never returned.

Peterborough Conington (Formerly RAF GLATTON) has been T6 Harvard Ltd’s primary location since 2021 and is the home of our Declared Training Organisation (DTO 0308). We are very proud to be located at this historic airfield and the former home to many heroes of the greatest generation. When you fly from this airfield, you can’t help but feel the history beneath your wings, knowing that Within 14 months, 729 Airmen were either killed in action, missing in action or prisoners of war that flew from this airfield. We still use part of the original runway orientated 28/10, and one can’t help thinking when you look at the mural on the Hangar of those brave souls coming in to land on final runway 28 after a mission. 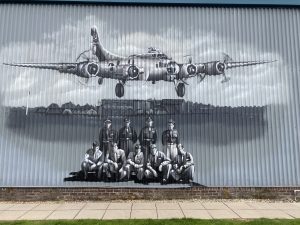 A U.S. European Command Joint Intelligence Operations Center Europe Analytic Center commander dedicated a mural at the location of a former World War II U.S. Army Air Forces base, Royal Air Force Glatton, England, August 19, 2021. U.S. Air Force Col. Abe Jackson, EUCOM JAC commander, worked with the staff of the Flying Club Conington at Peterborough Conington Airfield to commemorate the 457th Bombardment Group Airmen who served and flew missions from RAF Glatton from February 21, 1944, until April 20, 1945.
Within the 14 months, 729 Airmen were either killed in action, missing in action or prisoners of war. Julie Churchill, the owner of the Flying Club Conington, commissioned a mural to be painted on their Hangar. The club utilizes the runway and Hangar left behind from the former base. “We wanted to honour the connections we’ve had with the 457th,” Churchill said. “We routinely get children, grandchildren, and even great-grandchildren [of the Airmen] come to see. So we wanted to produce something that will be meaningful to them and us.” Jackson dedicated the mural and shared his thoughts about the memorial. “Today symbolizes an opportunity for us to recognize the significant contributions of those Airmen who came before us,”
Jackson said. “In every generation, Airmen always have a spirit of innovation and excitement. I got to share and retell their story and their legacy. It’s their story, but I got a chance to share it with everybody that was here.”Nathan Murdock, a Peterborough artist, painted the mural depicting the last crew to face a casualty from RAF Glatton, who flew a mission over Germany two days before the war ended.The crew was flying mission 234 on April 18, 1945, above the marshalling yards in Freising, Germany. After completing the target drop, their B-17 Flying Fortress was hit, and the crew parachuted from the damaged plane. Unfortunately, Sgt. John T. Miller, 748th Bombardment Squadron engineer, was killed in action. The rest of the nine members safely landed but were taken prisoner by the Germans. They were liberated ten days later. Murdock was moved by the piece and expressed his emotions. 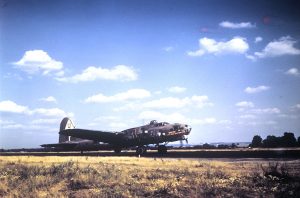 “There’s a lot of pressure because you’re telling a piece of history, and it has an emotional connection,” Murdock said. “When I was painting, there were a lot of people crying. I enjoy doing something that provokes emotion and a connection to people. That makes it more special and worthwhile.” 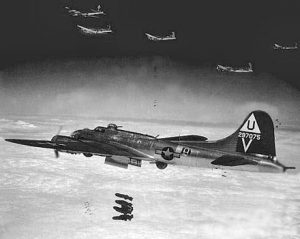 “The veterans used to come over, those that were able,” said Goodchild. “Year on year, the numbers get less and less. I love the Americans’ great sense of family and tradition. Those aviators’ families now come over in their place. Even though the place doesn’t exist anymore, I could show them where their father or grandfather would have laid their head at night. I’ve walked them up the runway that he would have flown from. I took a photograph with them holding a picture of their grandfather and father. That was quite a tear-jerking moment because it meant so much to them to see where he’d been. That’s my prime mover, remembering people who should never be forgotten.” 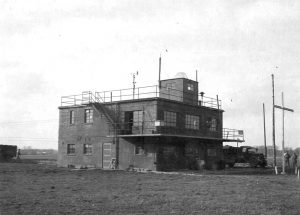 left – The Control Tower, now demolished, of RAF Glatton, taken on March 31 1945. In the distance, to the left of the tower, a B-17 is visible on the taxiway. U.S. Air Force Photograph, in the public domain.

Between Huntingdon and Peterborough, in the west of Cambridgeshire, lies the small village of Conington. With its beautiful All Saints Church, first mentioned in Domesday Book and rebuilt in the early 16th Century, and charming cottages and homes perched on the edge of the fens, one can hardly imagine that 70 years ago, this was the home of four squadrons of B-17 Flying Fortresses, roaring into the air almost daily for targets in Germany and Occupied Europe. 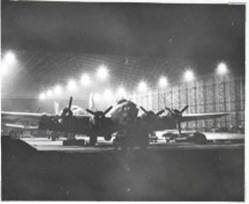 In the Second World War, Conington was located next to Royal Air Force Station Glatton, which was constructed to Class “A” standards by engineers to support heavy bombers in 1943 with the intent of being used by the U.S. Army Air Forces in the strategic bombing campaign. The 457th Bombardment Group (Heavy) arrived on January 21 1944, consisting of the 748th, 749th, 750th and 751st Bombardment Squadrons.

The recognizable tail code of the 457th was the “triangle U” painted on the vertical stabilizers of the Boeing B-17 Flying Fortresses, which operated from the air base. The 457th Bomb Group worked at RAF Glatton from January 1944 until April 20 1945, when it completed its 237th and last combat mission after the war. 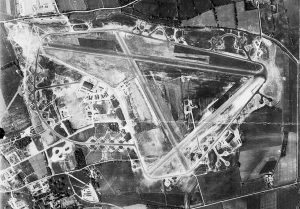 Before June 1944, the 457th operated on attacking strategic targets in Germany – munitions factories, ball-bearing plants, marshalling yards and oil refineries. On D-Day, the 457th flew missions against Cherbourg Peninsula, attacking German positions off the east flank of American forces landing at Utah and Omaha beaches. By July 1944, the 457th had resumed strategic bombing and would continue to focus on German targets through April 1945.

In addition, the 457th provided aerial bombing support to the breakout from St. Lo in northern France, the British 1st Airborne’s landings at Arnhem in the Netherlands, and in support of embattled U.S. Army forces in the Battle of the Bulge. 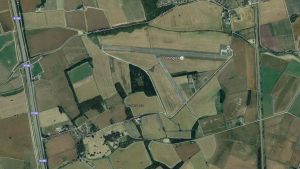 After the War, the B-17s of the 457th Bomb Group returned to the United States, and the airfield was used by the No. 3 Group of the RAF Bomber Command, flying B-24 Liberators and Avro Lancaster heavy bombers. However, by 1948, it was decided that the airfield was surplus, and the land was returned to agricultural use and demilitarized.

Left – RAF Glatton now as Peterborough Conington, home of the Wacky Wabbit T6 Harvard based at the far right of the top 28/10 runway. 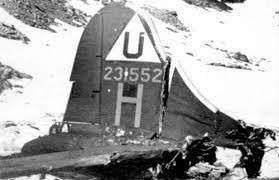 Right – B-17 crash Schlappintal, Switzerland July 12, 1944 – B-17 G-20-BO, Serial No.: 42-31552, Marking: H, Nik Name: “My Buddy” of the 8th Air Force, 457th Bomb Group, 748th Squadron off from Glatton, England, with the mission to bomb Munich. Anti-aircraft defences gave the men from overseas a hot reception over Munich. “Flab so close you could get out and walk on it!” was an oft-used expression of the crews upon their return. The “Fireball Outfit” was the most severely marked group with three losses. The Flying Fortresses’ “My Buddy” set off with flak damage over Munich toward Switzerland and smashed into the rocks in the Schlappintal.
Learn more: https://www.b17museum.ch/index_e.php 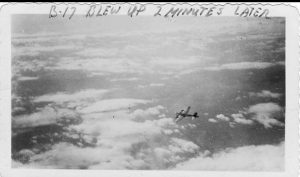 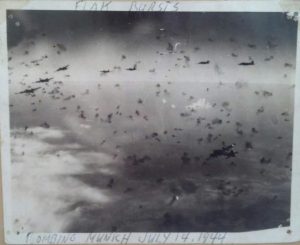