The New Old-Fashioned Way: Discussing Watches And Flying With A Modern-Day Warbird Pilot

Due to the passage of time, accidents, and the impacts of war, many pilots and test pilots from the pioneering days of aviation and the early jet age are no longer with us. As such, I often rely on families and photos when researching aviators and their timepieces. For a change, I thought it would be interesting to chat with a modern-day pilot who flies vintage aircraft to get his take on flying and watches.

I spent a day at the Imperial War Museum Duxford, Europe’s largest air museum and a former wartime RAF base, which is still an active aerodrome. I was there to meet pilot and army veteran Andy Goodall to talk about watches and his aviation career. Andy, who recently qualified as a Hawker Hurricane display pilot, is also a director at T6 Harvard Ltd and a co-owner of Harvard G-BJST (“The Wacky Wabbit”). He and his team are very passionate about vintage warbirds and aviation history. 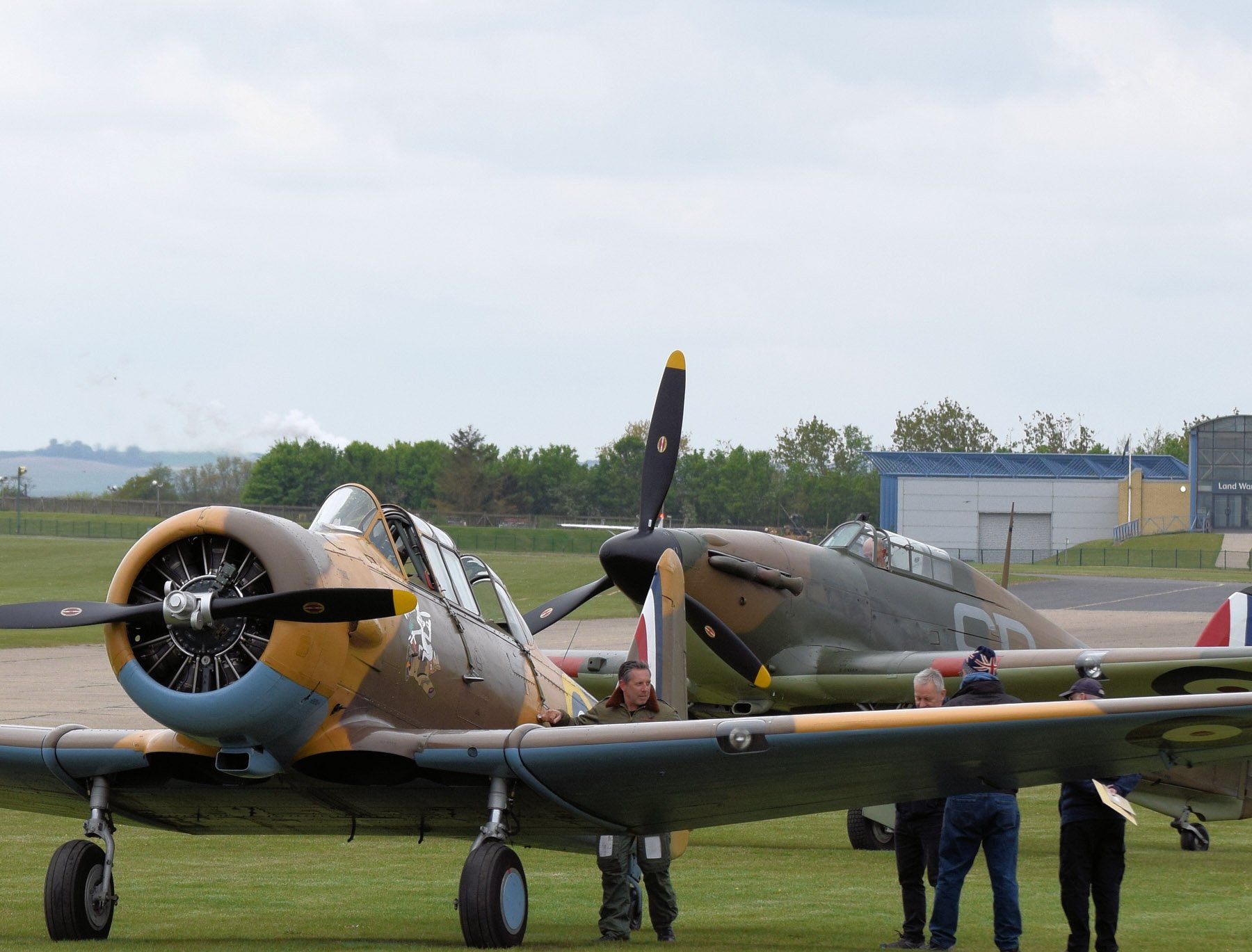 Andy used our meeting as a chance to grab some food, taking his first break from a hectic day’s flying schedule. Jumping down from the Hawker Hurricane, we sat near an original “Battle of Britain” hangar, and it put me in mind of those wartime pilots grabbing a short rest between sorties back in 1940.

Most airmen would not leap out of a serviceable aircraft, but after joining the British Army Parachute Regiment in 1989, Andy spent a lot of his early career jumping from them. This led him to become a parachute instructor/examiner and spend five years with the world-famous Red Devils army parachute display team. The standard-issue British Army watch then carried the nickname “G10” after the form used to sign it out from stores. Andy recalled wearing a basic Citizen civilian dive watch instead. According to him, there would be “hell to pay” if you lost an officially issued G10, even if you had just successfully parachuted into the capacity-crowd-filled Wembley Stadium or dropped into Horse Guards Parade in London.

As a Red Devil, Andy parachuted into 250 special events, so he has plenty of high adrenaline-fueled jumps under his belt. Andy told me that on active international service, the Rolex Submariner was also popular with the elite troops that he served with, including 2 PARA and the Special Forces Support Group (SFSG). Owners could use the watch as currency for short-term loans or bartering in a tight spot. He himself owned a “No-Date” Submariner and, later, a Submariner Date as personal kit during his operational military service. This service included four tours in Northern Ireland as well as tours of duty in Afghanistan and Iraq. 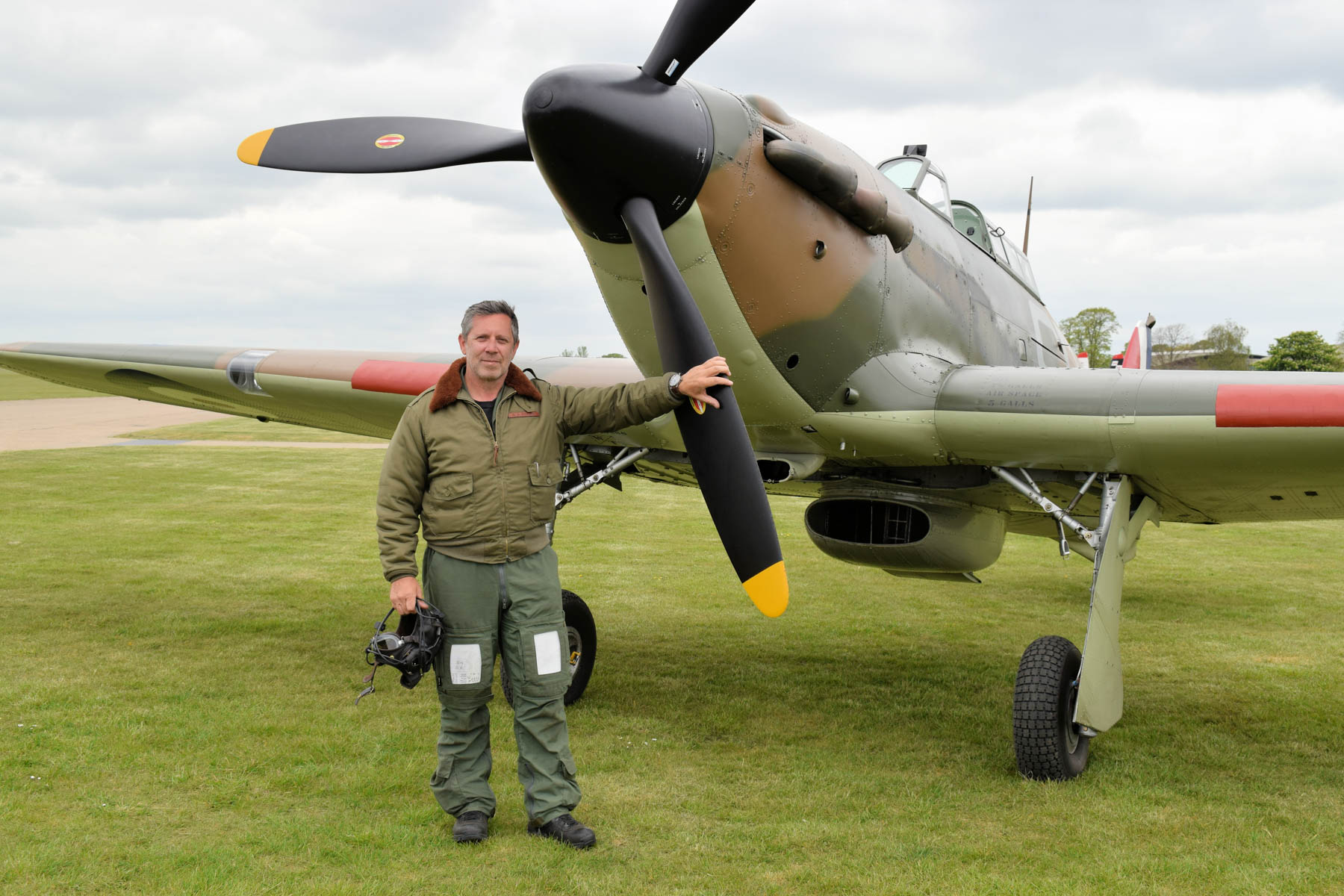 As a world-class parachutist, after spending so much time in aircraft, Andy wanted to learn to fly, so he trained as a pilot. He began flying planes for parachute teams but wanted a more exciting challenge, which then developed into an ambition to fly a WW2 fighter aircraft after he met someone who is, still to this day, renovating a Spitfire back to airworthy condition. The fellow promised Andy that he could fly it if he was qualified. It has been a long journey for the ex-Para. He has been flying Harvards since 2011 and is display-authorized by the CAA.

In 2021, on his 51st birthday, Andy went to the US for training and proudly qualified to solo a P51 Mustang. Hollywood actor Tom Cruise owns and is also solo-qualified on a vintage P51 Mustang warbird, so Andy was happy to be joining the Top Gun league. To top it all, as mentioned when we met, Andy was celebrating just becoming display qualified on the Hawker Hurricane. On that day, along with the Harvard, he was flying the Mk1 Hurricane V7497, which flew operationally at the height of the Battle of Britain. Seeing that legendary aircraft on the historic Duxford Airfield and hearing the Rolls-Royce Merlin engine as it roared overhead really was a moving experience. 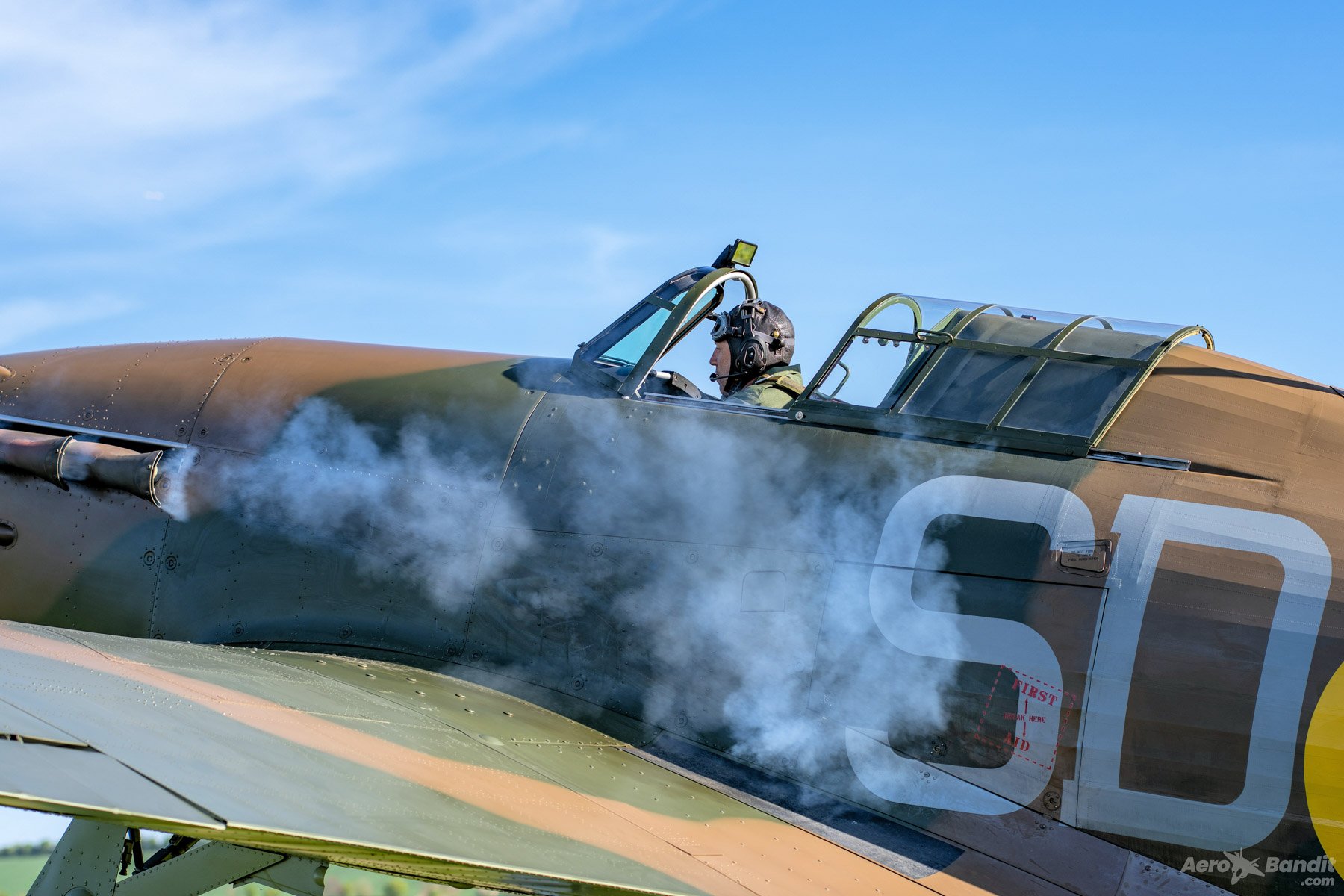 Andy’s enthusiasm for WW2 aircraft continues on the ground. He spends time undertaking detailed research on renowned pilots, such as Wing Commander Robert Stanford Tuck, and their equipment. He looks to wear period-authentic uniforms and has even restored an antique flying helmet, microphone, and oxygen mask back to working condition. Companies like Eastman Leather also provide quality vintage-style clothing so that he can look the part at airshows. 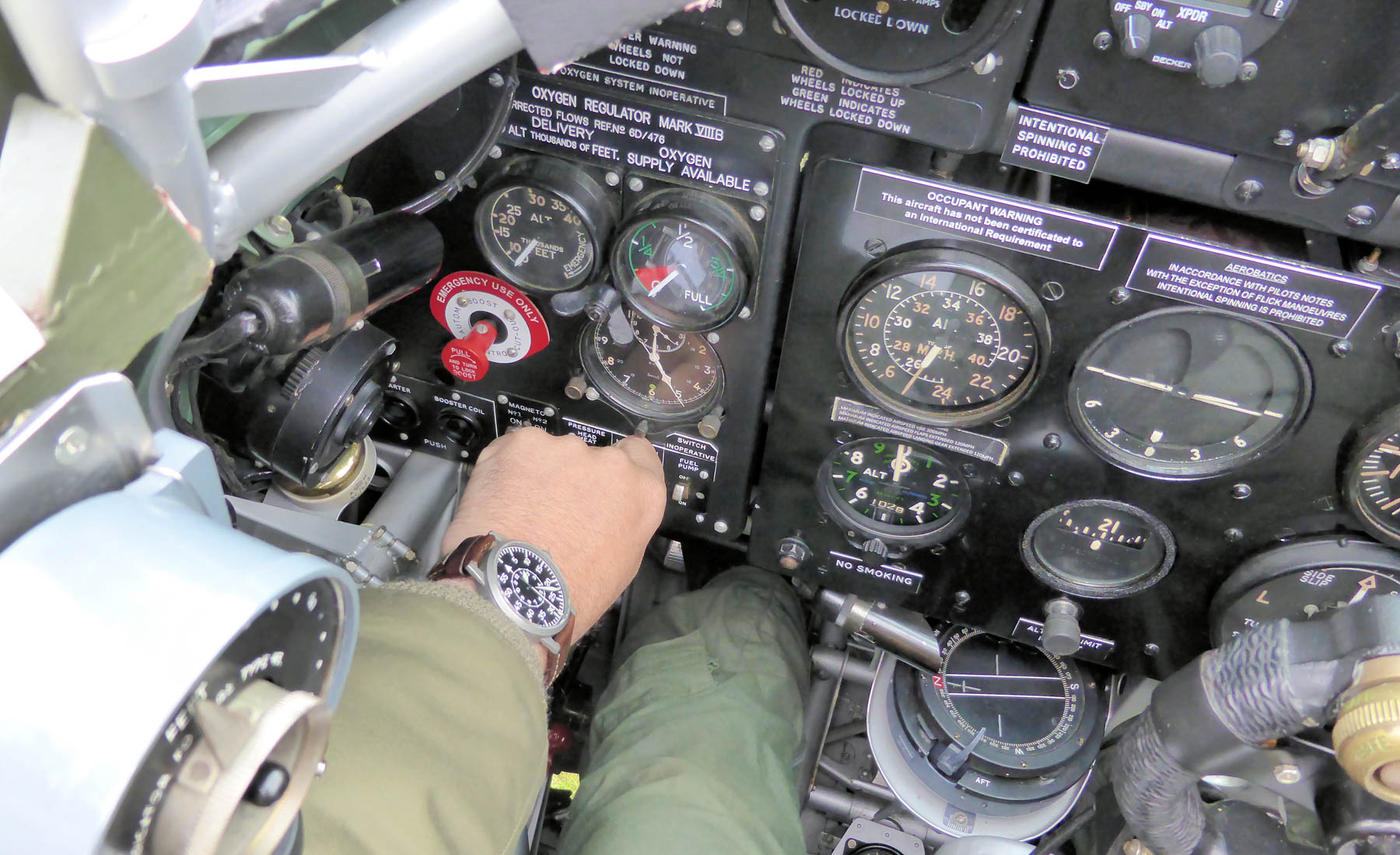 As his flying career has taken off, what timepieces does he choose to wear these days?

Well, first up is a reproduction Flieger watch by Laco. For his backstory when in character, Andy claims that a captured German pilot gave it to him. It is big, simple, robust, and easy to read. Combined with a vintage look, it ticks a lot of boxes given Andy’s occupation. Like the smaller RAF 6B/159 Pilot’s watch, Flieger watches followed a distinct set specifications in WW2. Several companies, including Laco, IWC, and A. Lange & Söhne were ordered to supply them to the Luftwaffe. 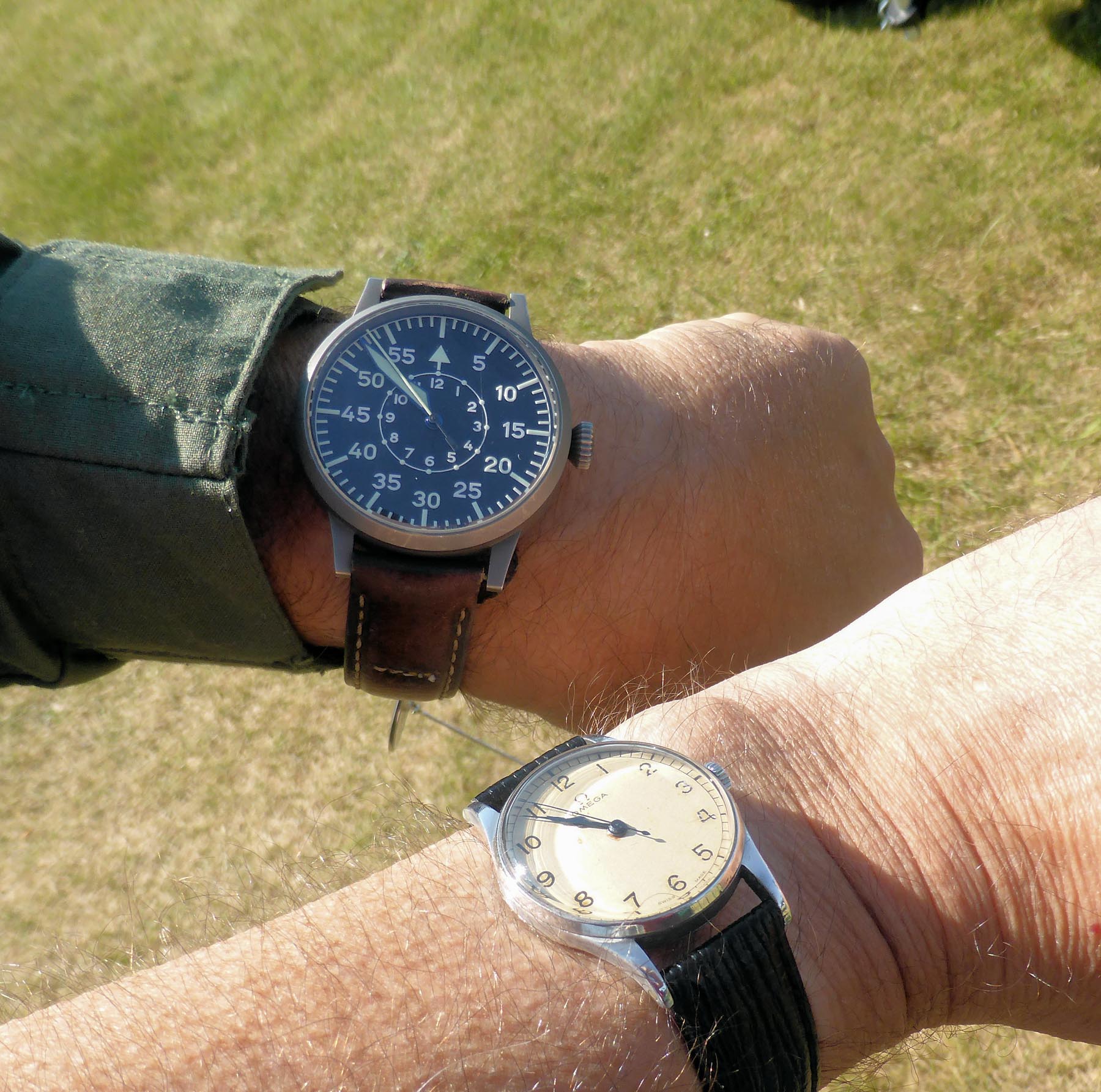 During an eight-minute display, the Harvard has a modern stopwatch fitted to it. When flying other vintage warbirds like the Hurricane, however, a quick wristwatch check is sometimes necessary. I did notice a lovely original mechanical Smiths V.308 clock mission timer on the Hawker Hurricane’s instrument dial, though. 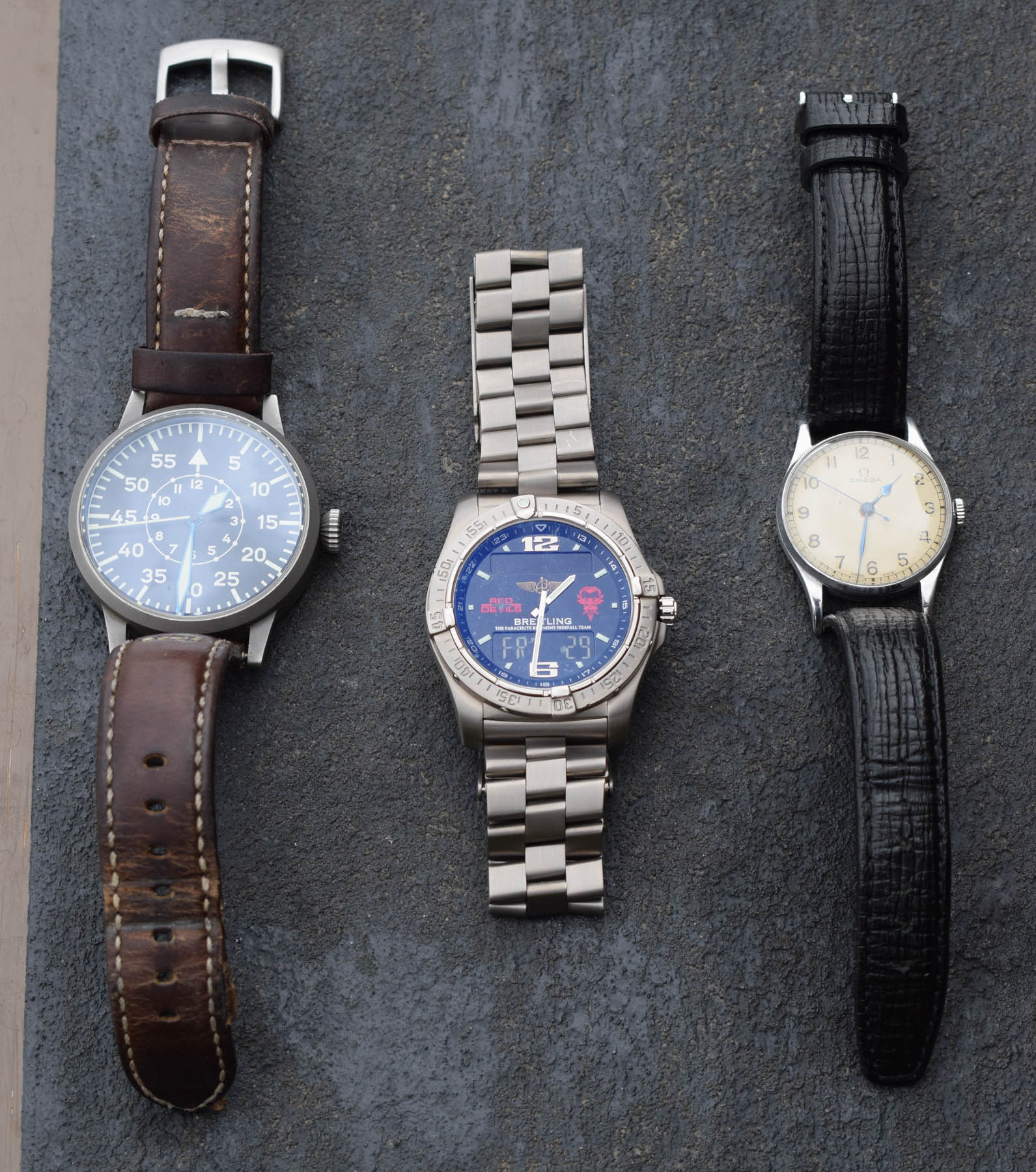 His other daily watch is a rare limited-edition Breitling Aerospace. Only 30 pieces were specially made in 2008 for the Red Devils display team. All of the owners, aside from being in that elite squad, must have served at least three years in the Parachute Regiment and completed an operational tour. Andy managed to snag serial number 007 and seems to be doing his best to live up to that James Bond moniker in terms of adventure, danger, and excitement. 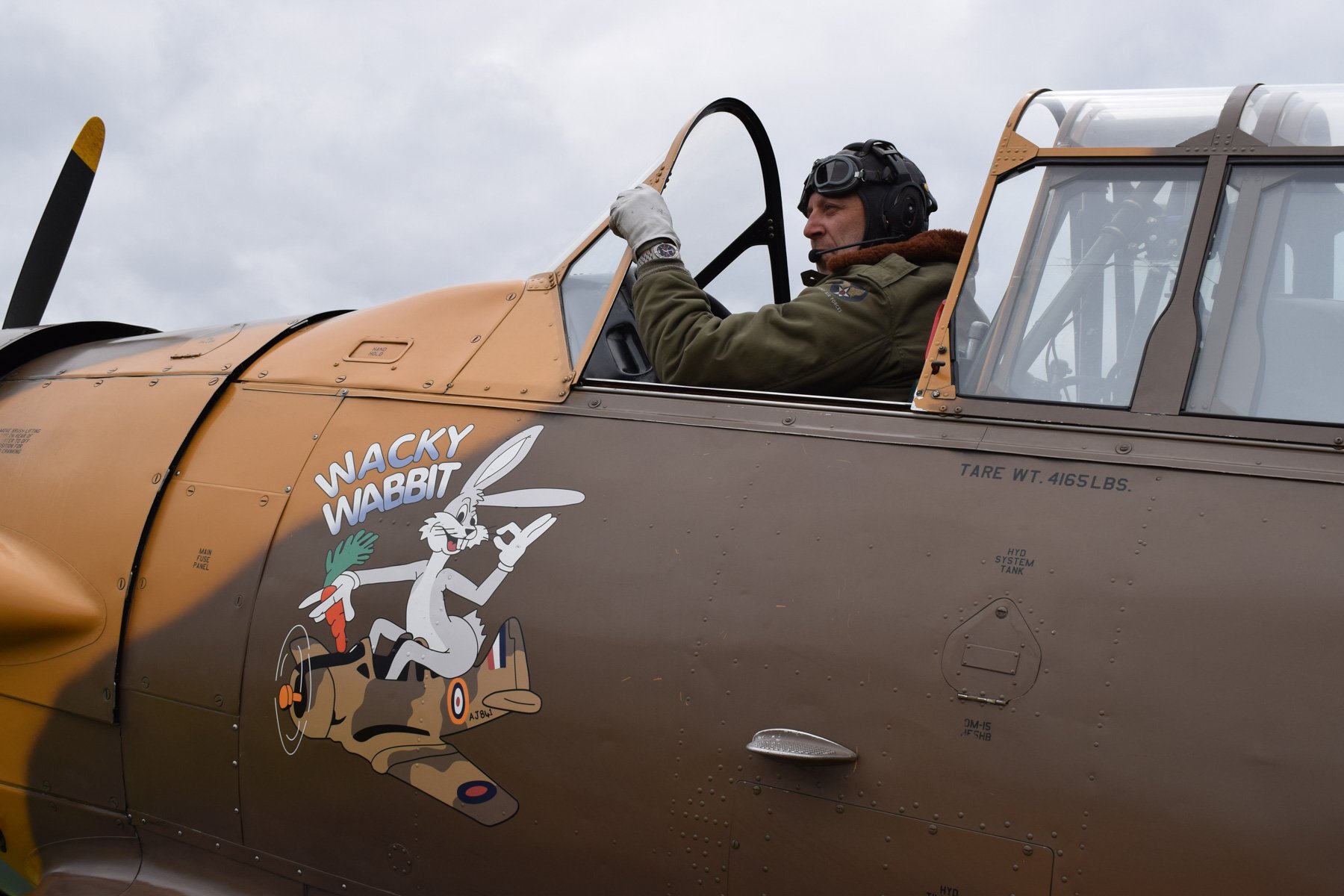 He confessed that, aside from the bezel, he does not use any advanced functions on the Breitling. With modern technology like Sky Demon available for flight planning and navigation, basic, easy-to-read time management is all he needs from a wristwatch, without any extra bells and whistles. 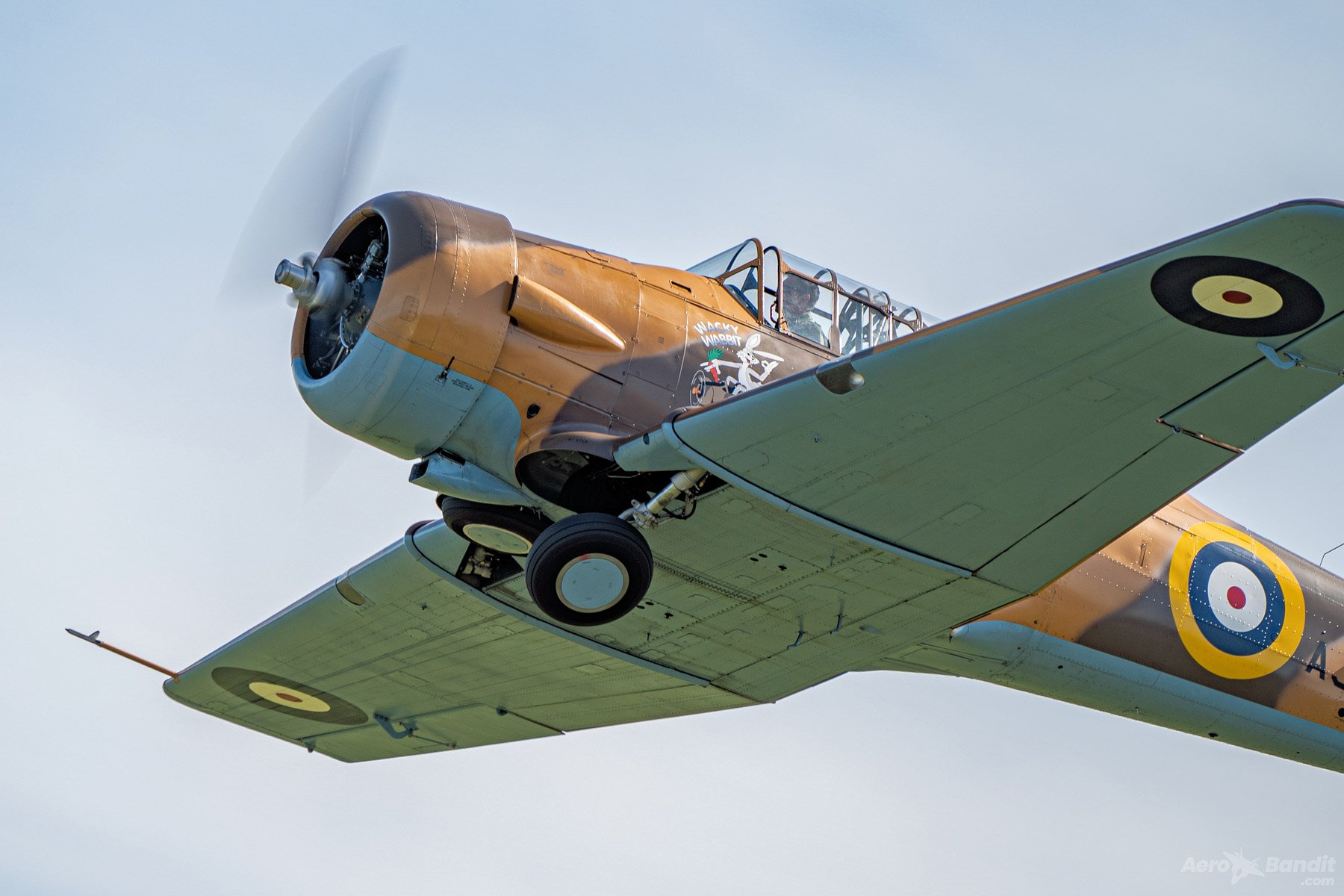 Having enjoyed an aerobatic flight myself as a passenger in the Wacky Wabbit Harvard a few weeks before this interview, I noticed that the G-forces made it hard to focus at times. Unsurprisingly, Andy has always had good G–tolerance, and it looks like his teenage daughter Millie is a chip off the old block. She enjoys helping the team and jumps at every opportunity to accompany her dad on an aerobatic flight.

Andy and his team of vintage aviation enthusiasts are determined to keep the memory of the pilots who sacrificed so much in WW2 alive and to train new pilots to fly the wonderful vintage aircraft that we all enjoy at airshows. The T6 Harvard also gives the public the chance to experience what it was like flying in a WW2 aircraft.

As we parted company, I asked Andy how display parachuting compared with display flying. He told me that elite precision parachute displays leave little margin for even the smallest error. As such, he finds aircraft display flying less stressful and more enjoyable. Andy recounted how, during air shows, after passing a crowd at a low level and pulling up into a roll, he always has a big grin on his face, enjoying the best job in the world. He also has a flying date to keep with the Spitfire that started his journey to piloting warbirds once its long restoration process is complete. 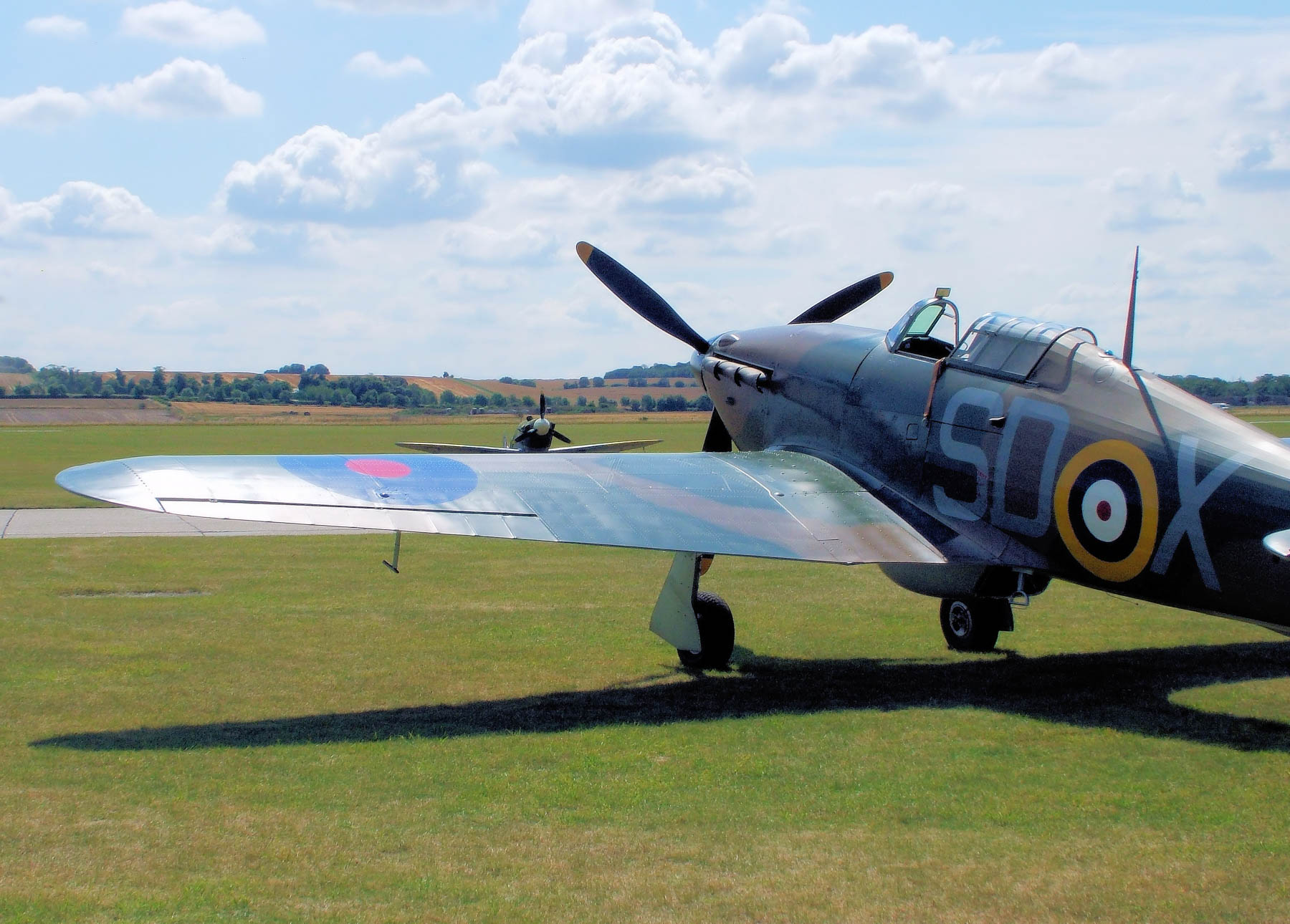 Alan Bessant researches famous aerospace pilot watches as a hobby. If you have a watch with a story that you would like him to feature, you can contact him at [email protected].