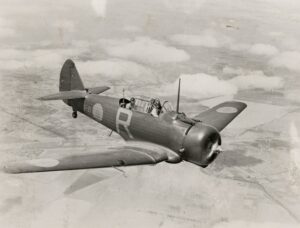 The CAC Wirraway (an Aboriginal word meaning “challenge”) was a training and general-purpose military aircraft manufactured in Australia by the Commonwealth Aircraft Corporation (CAC) between 1939 and 1946. It was an Australian development of the North American NA-16 training aircraft. The Wirraway has been credited as being the foundation of Australian aircraft manufacturing.

During the Second World War, both the Royal Australian Air Force (RAAF) and Royal Australian Navy (RAN) deployed several Wirraways into combat roles. They served in a makeshift light bomber/ground attack capacity, striking against the Empire of Japan’s advancing forces.

While the type had been primarily used as a trainer and general-purpose aircraft, being present in small quantities within most front-line squadrons for these purposes, the aircraft was often pressed into combat when required. Typically, fighter versions of the Wirraway were operated over theatres such as New Guinea to perform ground attack missions and other Army co-operation tasks over extended periods until more advanced aircraft had become available in sufficient quantities. On 12 December 1942, the Wirraway achieved its only shoot-down of an enemy aircraft—thought to be a Mitsubishi A6M Zero at the time, but later determined to be a Nakajima Ki-43 Hayabusa —while flown by Pilot Officer John S. “Jack,” Archer. 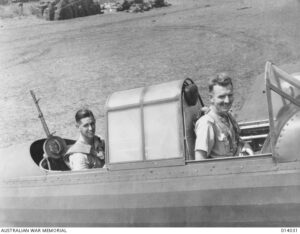 On December 26th, 1942, Royal Australian Air Force (RAAF) Pilot Officer John S. (Jack) Archer with crewman Sergeant J.L. (Les) Coulston of No. 4 Army Co-Operation Squadron were flying this CAC CA-5 Wirraway Mk.II (serial number A20-103) on a reconnaissance flight over a Japanese shipwreck near Buna, New Guinea, when they spotted and dived on what was reported as a Japanese Zero/Zeke fighter1,000 feet below. With machine guns blazing, and against all odds, he shot it down! 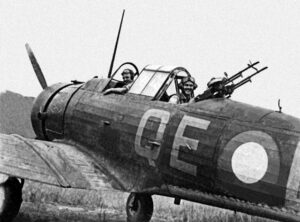 His five-second burst of machine-gun fire saw the Japanese aircraft plummet into the water and burst into flames – the victory was confirmed by 3 sources that day (the crew and personnel from the Australian Army 2/14th and 2/16th Battalions). Archer and Coulston completed their reconnaissance mission after this incident. The body of the Japanese pilot was later recovered – it was discovered that he had been shot through the head when his fighter came under attack.

Archer later said he just acted on impulse and was lucky to get a good shot in first. For his act of bravery, on January 19th, 1943, he was awarded the Silver Star for combat valour by none less than United States General Douglas MacArthur, Allied Supreme Commander of the Southwest Pacific Area! The citation stated, “doing the impossible – shooting down a Zero and bringing home his observer to tell the tale“. He was personally presented the medal by Brigadier Ennis C. Whitehead, the Commanding General Allied Air Force in New Guinea. 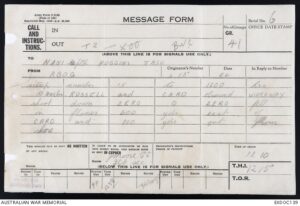 The Australian Army signal transcript advising the observation of a RAAF CAC Wirraway shooting down a “Zero” aircraft in the vicinity of Gona, New Guinea on December 26th, 1942 – this would turn out to be the Wirraway flown by J.S. Archer (Photo Source: Australian War Memorial)

Archer achieved the only known air to air victory in a CAC Wirraway. A post-war investigation revealed that the aircraft shot down was actually a Nakajima Ki-43-II Hayabusa (“Peregrine Falcon”) or Oscar, as the Allies called it Imperial Japanese Army Air Force 11th Sentai, rather than an Imperial Japanese Navy Mitsubishi A6M2 Zero/Zeke. The mistake is understandable as back then; everything was probably reported as a Zero! 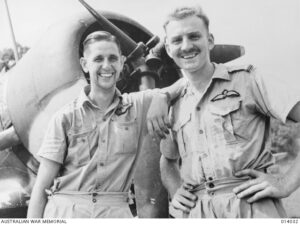 Archer was given six bottles of beer from the Australian High Command in an amusing footnote from the pages of history. Liquid gold for his heroic actions! In the back of the Wirraway, Coulston was mentioned in despatches for his part in this unlikely aerial victory.

John S (Jack), the Archer, enlisted in the RAAF on August 15th, 1941 and graduated from his flight training as a Pilot Officer on May 28th, 1942. He conducted 42 sorties, and 19 airstrikes with No. 4 Army Co-Operation Squadron between November 1942 and June 1943 – his commander’s assessment of his abilities was “Above average and exceptional“. His wartime career spanned numerous units and included a stint with No. 75 Squadron from August 1944 to June 1945 flying Curtiss P-40 Kittyhawk fighters out of various bases in New Guinea and the Dutch East Indies (Noemfoor Island, Morotai and Tarakan), harassing the last of the Japanese forces still based in the region, he conducted 20 sorties and 45 airstrikes (171 hours of flying time) – his commander’s assessment of his abilities was “Above average. He returned to Australia and continued his career with the RAAF until his discharge from service in March 1948. 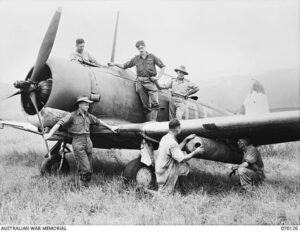 Caption from AWM “GUSAP, RAMU VALLEY, NEW GUINEA. 1944-01-02. 405747 FLYING OFFICER R.D. LEE-WARNER (5) WITH MEMBERS OF NO. 4 (TACTICAL RECONNAISSANCE) SQUADRON’S GROUND STAFF WHO ARE ENGAGED IN ATTACHING CONTAINERS TO THE BOMB RACKS ON A WIRRAWAY. THE CONTAINERS HOLD CHRISTMAS COMFORTS GIVEN BY AMERICAN UNITS IN THE GUSAP AREA TO MEN OF THE 7TH DIVISION.” Source: AWM (070126)

CAC CA-5 Wirraway Mk.II was produced at the Commonwealth Aircraft Corporation factory at Fishermans Bend in Melbourne in 1940. Entering RAAF service with 1 Aircraft Depot, Laverton on September 8, 1940, this aircraft flew with No. 4 Army Co-Operation Squadron from October 7th, 1940 to January 15th, 1943 – during this period, it was based in Australia at Canberra (ACT), Camden (NSW) and Kingaroy (QLD); along with its service at Berry/Bomana in New Guinea. The squadron pilots completed 42 operational missions and 49 other flights. 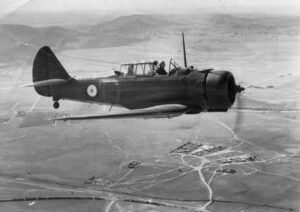 Wirraway (A20-103) flew with 5 Service Flying Training School(5 SFTS) at Uranquinty, NSW. Here during March 1944, the aircraft was involved in another significant footstep in Australian history, when it was flown twice by one Sergeant Leonard ‘Len’ Waters, the first Australian Aboriginal to become a fighter pilot (he originally trained as an aircraft mechanic before switching to flight training in 1943).

Len Waters would fly 95 operational sorties in Curtiss P-40N Kittyhawk fighters with No. 78 Squadron in the Dutch East Indies during 1944/45 (he mostly flew ground attack missions as there was not much Japanese aircraft opposition by that stage of the war). Len left the RAAF in 1946 with the rank of Warrant Officer. 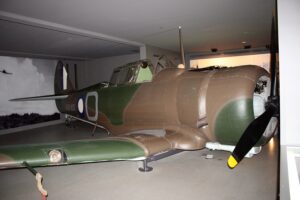 This time at 5 SFTS could well have been the end of this history-making Wirraway when Wirraway A20-80 struck it during a taxiing collision on April 16th, 1944! Luckily it was able to fly on!

The Wirraway then served with 3 Communications Unit, Mascot, NSW and saw out its post-war days at the RAAF Point Cook Central Flying School (CFS) in Victoria. The aircraft was presented to the Australian War Memorial in 1959 for permanent preservation with a valuable 3,371 hours and 25 minutes of RAAF flying time on the clock.

Above – CAC CA-5 Wirraway Mk.II (serial number A20-103) at the Australian War Memorial. This aircraft flown by RAAF Pilot Officer John S. (Jack) Archer was the only known Wirraway to shoot down a Japanese aircraft in World War Two (Ki-42 Oscar fighter) – photo taken during my January 2016 visit to the museum