“Behind every review is an experience that matters.”

I would personally like to thank all of our customers for choosing T6 Harvard Ltd as your warbird experience provider. The emails and messages below are from some of our customers who have had a fantastic experience with us and have gone away wearing that “Harvard Smile” Thank you all for your heartfelt messages; it means so much to us!

I wish I had started collecting the many “thank you emails” 10 years ago, so these are from 23rd May 2021 onwards from the best review platform, “Trust Pilot”:

“Behind every review is an experience that matters.” “Each review has a personal story.” “Creating a place where trust can be earned.” 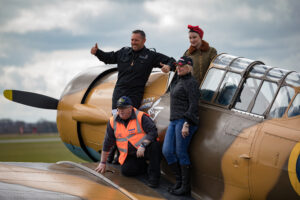 At T6 Harvard Ltd, we offer conversion courses for pilots who would like to qualify on the Harvard. We believe that if we train you, we should stand by our quality of training and let you go solo. We are one of the only companies worldwide that offer this opportunity. For some, it takes many hours to achieve the required standard to take this historic aircraft aloft solo, and for others, they take to it very quickly, like Adam below, who went solo in just 3.5 hours; however, he is the exception, not the rule! Please look at some of the most recent pilots we have sent solo since 2021. 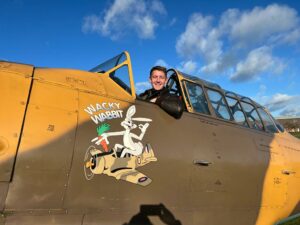 Talent spotting: One of the aims of T6 Harvard Ltd is to bring on new pilots and encourage the next generation of Warbird pilots. One of the directors noticed Adams’s passion for warbirds and offered him the chance to instruct us if he did the conversion training syllabus. Adam did not disappoint and currently holds the record with us at T6 Harvard Ltd for going solo in the shortest possible time of 3.5 hours! Adam began his aviation career serving ten years in the RAF as a Weapons Systems Officer on the Tornado GR4. Leaving the RAF in 2016, he started his commercial pilot training and, in 2018, joined British Airways as a First Officer on the Airbus A320. In his spare time, Adam instructs on single-engine piston aircraft and enjoys sharing his enthusiasm for aviation with others, particularly when flying vintage aircraft. 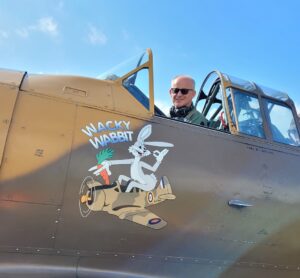 Flying Instructor: Dom came to us in 2021 and asked a simple question… “Can you teach me to fly a Harvard, and can I solo it”? The answer was, “Well, give it a go and see what happens” Dom was already a tailwheel instructor on aircraft like the Chipmunk, so it proved to be a reasonably straightforward transition. Sure enough, after a few hours, Dom was doing great, and he achieved his dream after around 6 hours which is way above average with one of our expert instructors. We were so impressed with Dom’s attitude and professionalism that we offered him a slot as an instructor on our team at T6 Harvard Ltd. Dom will now have his first season as an instructor giving experience flights at some of our prestigious locations from 2022 onwards. 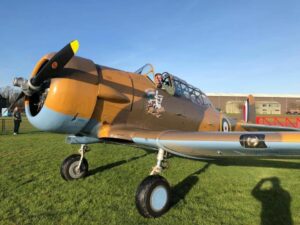 A commercial 737 pilot and warbird enthusiast, David Petters, exchanges his airliner for the Wacky Wabbit! David originally qualified in G-BJST before she was painted as the Wabbit! Check out Wabbit’s old paint scheme. David is a Co-owner in a Chipmunk syndicate and has many hours flying the Chippy and instructing in it. In addition, David has many hours in the Tiger Moth and, as of 2022, has become one of the senior instructors at T6 Harvard Ltd as a Flying Instructor who instructs on the experience flights and the Harvard Conversion training as a qualified rear seat instructor.

Andy made his first T6 Harvard solo in April 2013

Make the transition – “Most pilots dream of flying a warbird. Quote: “After many years of flying GA aircraft, I transitioned from ‘nose draggers’ to ‘tail draggers’ (traditional landing gear) and never looked back”! “Having completed my tailwheel differences training, I transitioned to the magnificent Harvard. T6 Harvard Ltd allowed me to solo, then continued to mentor me until I qualified as a Harvard display pilot (DA).”Following the DA, Andy flew the Mustang P-51, T-28 Trojan, Stearman and the Hawker Hurricane. Andy has now revalidated his Class Rating Instructors Course (CRI) and now instructs new students on the mighty T6 Harvard. (If you want to know more, take a look at Andy’s Bio on this Link)

Peter Kirkpatrick makes the conversion to the T6 Harvard.

Peter is a leading UK Neurosurgeon who has many hours flying the outstanding Pitts Special in unusual attitudes! Before Peter took to the skies in his own Hurricane, he became comfortable in the “beefier” T6 Harvard. Of course, the T6 Harvard is excellent preparation for fighter aircraft such as the Hurricane, Spitfire, and the P51 Mustang. Accruing hours in the T6 Harvard, Peter then went on to solo the Hurricane V7497 and has now completed over 10 hours and is working up to his Hurricane Display Authorisation. You can find more information about Kirk and his progression at the website – Hurricane 501

We got to fly in the Wacky Wabbit T6 Harvard. This remarkable aircraft was also featured in the latest channel four documentary with Guy Martin!

Thanks for reading, and please go to Trust pilot – Link