The Texan originated from the North American NA-16 prototype (first flown on April 1, 1935) which, modified as the NA-26, was submitted as an entry for a USAAC “Basic Combat” aircraft competition in March 1937. The first model went into production and 180 were supplied to the USAAC as the BC-1 and 400 to the RAF as the Harvard I. The US Navy received 16 modified aircraft, designated the SNJ-1, and a further 61 as the SNJ-2 with a different engine. 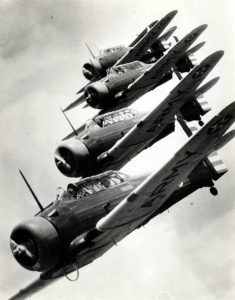 The BC-1 was the production version of the NA-26 prototype, with retractable tailwheel landing gear and the provision for armament, a two-way radio, and the 550-hp (410 kW) R-1340-47 engine as standard equipment. Production versions included the BC-1 (Model NA-36) with only minor modifications (177 built), of which 30 were modified as BC-1I instrument trainers; the BC-1A (NA-55) with airframe revisions (92 built); and a single BC-1B with a modified wing center-section. 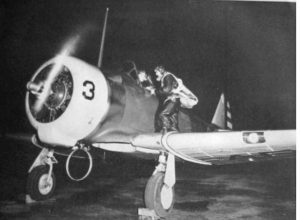 Three BC-2 aircraft were built before the shift to the “advanced trainer” designation, AT-6, which was equivalent to the BC-1A. The differences between the AT-6 and the BC-1 were new outer wing panels with a swept forward trailing edge, squared-off wingtips, and a triangular rudder, producing the canonical Texan silhouette. After a change to the rear of the canopy, the AT-6 was designated the Harvard II for RAF/RCAF orders and 1,173 were supplied by purchase or Lend Lease, mostly operating in Canada as part of the British Commonwealth Air Training Plan. 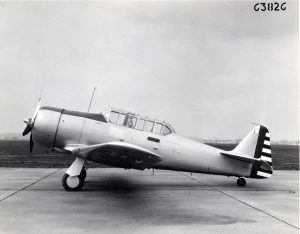 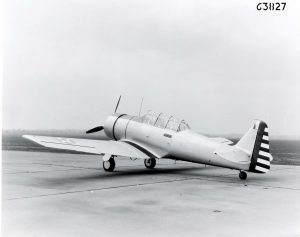