Q – Why do some Harvard’s have Gear doors and some don’t? 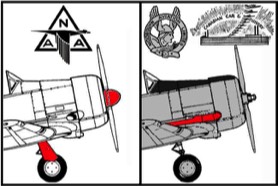 A – All NAA-built Harvard Mk IIs had gear doors fitted from the factory. However, when they got to Canada, they were probably the first things to be removed! In winter operations snow and ice would accumulate between the door and the landing gear and would sometimes freeze the gear in the up position. This is why you don’t see doors fitted to Noorduyn and CC&F built Harvards. (I guess I should say ‘most’ Noordyun-built Harvard’s. The earliest ones did have them fitted, but later ones did not.) The landing gear casting on the Mk 4 for example doesn’t even have the attachment fitting for the gear doors. Harvard’s and Texans that served in warmer climates usually kept them fitted.

Nowadays a lot of Canadian-built machines added the undercarriage doors and propeller spinners. Actually some others went as far as removing the wheel covers, probably to give a “GT” look. Perhaps they are not aware that by doing this the uncovered wheels generate turbulence enough in the belly of the aircraft to reduce the speed almost 10 MPH: The covers are there for a good reason!

To really break even in the UK you need to estimate at least £600 plus VAT very expensive but considerably cheaper than a Spitfire or Hurricane!

Q – Why are the propeller tips on the Harvard supersonic?

A – 2250 rpm is the speed of both the prop and engine. It’s a direct drive unless it has a geared engine (R-1340G) like on the DHC-3 Otter. So with no reduction gear and a direct drive, the propeller enters the transonic range making the distinct rasping noise of the T6 Harvard. Some say that it has the direct drive purely as it was the cheaper option at the time for a training aircraft

Q – What does SNJ stand for?

A – The U.S. Army Air Corps’ designation AT-6, stood for Advanced Trainer, sixth design. The U.S. Navy’s basic designation of the same aircraft was SNJ, which meant Scout-Trainer built by North American.

Q – When did Harvards get the long exhaust?

The experts to ask are those who study and build engines as a profession. Graham White, (no relation to the famous English Pioneer Era aviator, Claude Graham-White) is vice president of the Aircraft Engine Historical Society Inc. located in Huntsville, AL. Author of several books, including “Allied Aircraft Pistons of WWII,” White speculated that the tradition had nothing at all to do with Pratt & Whitney manufacturing practices and most probably began following WWII when engines were overhauled in the transition from military to civilian use.

“I’ve had engines come up to my shop from Pensacola [FL], preserved you might say, untouched since they were made, with pennies on the engine dated in the 1930s,” says Mangel. I was back to including pennies on Wasps and Hornets prior to WWII for all kinds of planes including Lockheed Vegas, and Chance Vought-built Navy observation aircraft. Wiley Post’s Vega used the same P&W around the world twice between 1931-1933.

My next encounter with a penny on an engine occurred at the restoration hangar for the Southern California Wing of the Commemorative Air Force (at Camarillo). As the guest of the veteran pilot and CAF volunteer, Ceci Statford, I met Col. Joseph Peppito, chief maintenance officer. Peppito led me to two P&W engines adorned with a penny. He could not recall the first time he’d seen it done, but he was certain he had read about it “somewhere in a magazine.” So far, he hasn’t been able to locate his source, but I doubt he’ll ever give up looking.

We will have decades ahead to ponder pennies on airworthy P&W engines. As Jim Levrett put it, “These are still some of the best piston engines going. Some were developed long before WWII. Their reliability and performance continually evolved especially with the introduction of leaded high octane fuels. Many have lasted over 60 years, and if maintained properly, they’ll probably last another 60.”

In the future, Levrett, White, Bursey, Peppito, Mangel, Thompson, or Wilkerson may call in another clue to resolve the origin of the P&W engine penny. That is, unless an AMT reader knows the answer already. If so, contact editor, Joe Escobar and we’ll follow up. I’ll personally send you a 2007 penny for your thoughts.