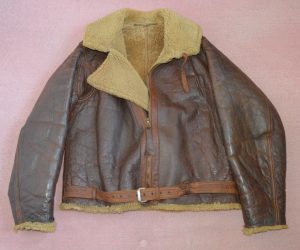 An original Irvin jacket, 1937/1939 – Extremely rare to find a jacket from this first contract. It was made before 1938 when IAC started to use 9 underarm vents on many of their jackets (this one has 8 vents). It is made of a thinner close pile fleece and retains all the original polyacrylate coating on the skin side.

Leslie Irvin was the inventor of the parachute “rip-cord” system and, in 1919, was the first man to make a premeditated free-fall jump from an aeroplane. The Irvin parachute was quickly recognised as an important piece of aviation equipment and in June 1919 Irvin set up Irvin Air Chute to manufacture parachutes for the U.S. government. In 1926 he opened a factory in the UK, at Letchworth and by the end of the 1930s Irvin parachutes were in use worldwide. 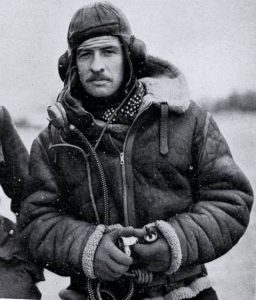 As aviation advanced so did the altitudes to which pilots could fly. Suddenly aircrew were flying to thousands of feet where temperatures would easily be sub-zero, not a good thing when aircraft construction still provided basic, un-insulated cockpits. This situation drove Irvin to create The Irvin Flying Jacket.

Irvin’s jacket was superb. Made from heavyweight sheepskin, its thick natural wool provided incredible insulation. And, while the sheepskin was considered heavyweight the jacket itself was comparatively light and remarkably comfortable. Irvin insisted on the most supple sheepskin: in a cramped cockpit movement was already restricted and no pilot or crew would want to be constrained further still. The Irvin jacket was a masterpiece of design, maximum warmth and comfort combined with maximum mobility. The jackets had long sleeves zipped to enable gauntlets to be worn. The wide collar could be raised to provide excellent insulation around the neck and lower part of the head and face while a belt was fitted at the waist to ensure draughts couldn’t drop the pilot’s body temperature and reduce his level of alertness. The original jackets didn’t have pockets as these were not needed.

Irvin was producing his jackets at Letchworth and supplied the RAF during the Battle of Britain and through most of WWII. The jacket was so popular Irvin had to enlist the services of subcontractors in order to meet demand. The subcontractors are often held responsible for variations in the pattern of jackets made during the war. Many examples from the WWII production show variations on that, for example, an additional, small angled panel above each hip. But the point is “there was a war on”, almost everything was scarce, including supplies of high-quality sheepskin, so large panels would be made by patching together smaller off-cuts. The variation in the original jackets is, we believe, not a result of poor subcontractors, but solid thinking by resourceful, committed seamstresses determined to keep their boys warm and safe as they defended the skies.

Adolf Galland – Adolf was obviously impressed with his captured Irvin Flying jacket. He was photographed many times wearing his Irvin 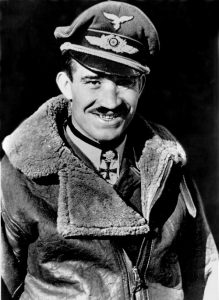 Monty was also partial to his Irvin – Field Marshall Montgomery was often seen in his Irvin flying jacket and on occasions also flying boots. He certainly knew how to keep warm! 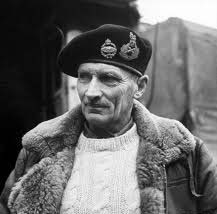 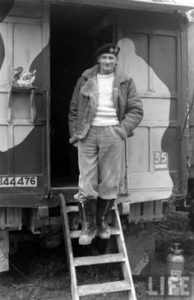