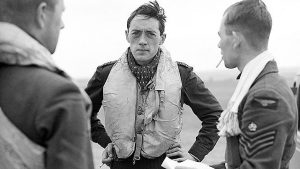 MAE WEST INTRODUCTION –  Interesting facts “For an RAF airman to be shot down over the sea was an almost certain death sentence if the German rescue services were not close at hand.
“Many a good fighter pilot was lost who would have been invaluable in the days that followed.”
An estimated 80 per cent of downed pilots died over the sea whereas the rate dropped to 50 per cent over land.

Frustrated at the poor rescue effort a New Zealand pilot, Flt Lt RF Aitken, “scrounged” a Walrus flying boat from the Fleet Air Arm and saved 35 British and German airmen over the summer. Air chiefs had assumed that the high volume of shipping in British coastal waters meant that downed airmen would be spotted and recovered. But by August 19, Air Vice Marshal Sir Keith Park, who commanded the fighter group in the south east, ordered his flight controllers not to vector pilots over the sea because “too many were getting drowned”.
The critical shortage of pilots came very close to costing the British the campaign and it was only when the dogfights were fought over land did the tide begin to turn. By Thomas Harding, Defence Correspondent. (Photo: The average age of an RAF pilot in 1940 was 20. The strain they were under is clearly written on the face of Squadron Leader B J E ‘Sandy’ Lane (centre), pictured here aged 23. He was killed in combat 2 years later.)

Inflatable rubber bladder and three-piece kapok buoyancy pads enclosed in light khaki cotton waistcoat of horse collar appearance. The life preserver is secured by three buttons to the front opening and two fabric tapes located above and below the buttons. 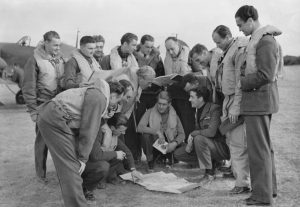 1932 pattern vest – Designated under the RAF stores number of 22C/55, this type was first introduced into service in 1932 and was used during the Battle of Britain period of the Second World War. Some ‘users’ painted their life preservers with bright yellow paint so that they might be more quickly spotted should they have to bale out over water to await rescue; subsequent patterns were manufactured entirely of yellow material.

Working reproduction of the 32 pattern vest 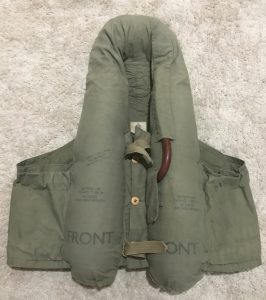 Reproduction – This is a reproduction of the 1932 pattern vest. As you can imagine finding an original example is extremely difficult and expensive due to the fact that they were replaced in 1941 by an improved life vest. The original 1932 pattern vests that you do find today are normally quite weak and faded as the fabric has degraded over 80 plus years. This vest (left) has a reproduction ‘Stole’ or internal bladder inserted internally, made to the exact 1932 specifications (Neil Seaton) Just for the sake of historical curiosity I tested this vest in the sea to find out my self how effective it was and check out its floatation properties (Andrew Goodall)
My findings were recorded on Gopro and can be viewed at the bottom of this article! My findings were very positive and I have noted some positives and negatives at the end of this short article. These findings were based on very simple tests as shown in the video and represent my own personal opinions. As I say on the video “It does what it says on the tin” Its a floatation aid however it has many points to improve on which they fixed on the 1941 pattern vest. 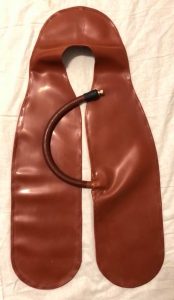 The stole – Stole or bladder on the left at the time of writing this article is the only known reproduction of the original bladder. The valve is slightly different to the original however the difference is very subtle. This allowed me to do an accurate initial fact finding test with the 32 pattern vest.  As you can see there is not much of an inflatable area around the neck compared to the larger bellows of the frontal area. 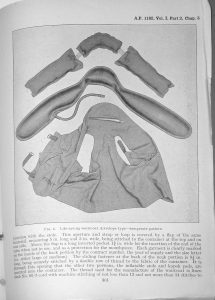 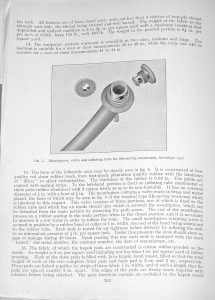