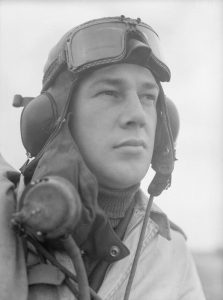 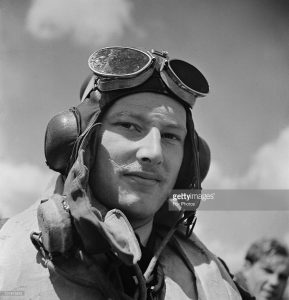 Left – Flight Lieutenant P S Turner of No. 242 Squadron RAF, wearing his B type flying helmet and D type Oxygen mask  Centre – Shows a pilot wearing the B type Helmet and Mk II goggles with D type mask  Right – Shows the same however the pilot has chosen a privately purchased set of goggles which was common of the era

Microphones – The types shown above fitted to the D mask, the official name was “Type 19 Microphone Electro-Magnetic, Stores Ref: 10A/10989”. The Type 19 included a Q Loom. The Type 18 was the microphone minus the Loom. “Type 18 Electro-magnetic microphone: stores ref 10A/10990”.

The pilot on the above right  named as Pilot Officer Gillman who, like so many of his youthful contemporaries, was shot down just a month later, giving his life in the service and defence of his country is wearing privately purhased Luxor 12 goggles. They were the finest goggles made in the 1930s and had triplex glass. During the Battle of Britain pilots preferred them to the RAF issued Mk III goggles with their celluloid lenses which scratched easily and melted in a cockpit fire.

For more information on the Battle of Britain, Please visit out other web site www.Hurricane501.co.uk

The Battle of Britain

By 1936 the Type B helmet was being introduced, similar to the 1930 pattern and designed to make the best use of the Type D oxygen mask. Above – Oxygen Mask Type D, Variant 1 with Type C Carbon Microphone. The D mask is fitted with the early Type-E microphone which is of carbon construction covered with chamois leather. This is a slightly different set up to the type 18/19 shown ‘top above’. The original bakelite ‘toggle’ switch is present  on this early E microphone. The goggles are the RAF Mk III issued type with padding around the edges. B Type Flying Helmet – The major differences were confined essentially to large-domed and zippered ear-pads and the back of the helmet was split with a Bennet quick release buckle, pulled together to fit (and apart for a quick release) The electrical wiring for the earphones was external on this helmet. The D Type oxygen mask was attached by two press studs. This was the helmet and mask with which RAF crews went to war in September 1939 – at least in the European theatre. The continuing problem in the oxygen mask was the risk of exhaled condensation freezing in the low outside-air-temperatures and blocking the inspiratory or expiratory valves or the oxygen delivery systems; further problems occurred with freezing of the goggles and the resulting lack of vision. The inside of the ear donuts house the receivers, these are padded out with a sorbo rubber which acts as protection to the receivers and also adds some side impact protection to the pilots head. (Pictures www.historicflyingclothing.com) 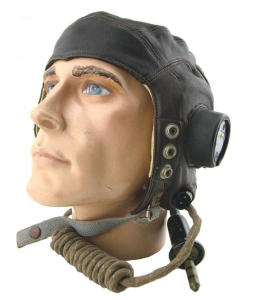 C Type Flying Helmet –  RAF AM Stores Ref. 22c/877 – By the end of 1941 the Type B helmet was superseded by the Type C which was intended to be used with the later Type E and F oxygen masks. A Type E helmet variant was the same pattern as the Type C but in an aertex material and was produced for the other RAF Commands such as Coastal Command flying long sorties in their Sunderlands and Liberators. This helmet is the second pattern C type as the first type had press stud leather goggle loops on the front which were quickly removed from later patter C types. In my opinion they were not very useful especially with the later type Mk VIII goggles as they restricted freedom of movement for accurate placement off the goggles over the eyes.  (Pictures www.historicflyingclothing.com) ‘B’ Type Flying Helmet in action

Above – Pilot Andy Goodall is wearing the 1936 B Type flying helmet as worn in the Battle of Britain with the D Type oxygen mask with the Mk 18/19 microphone and Q type wiring loom. The goggles are the Mk II RAF issue goggles again 1939/40 Battle of Britain era issued items.

Above – Pilot Andy Goodall is wearing the 1941 ‘C’  Type flying helmet as issued after the B type flying helmet, this time with the G Type oxygen mask with the Mk 48 microphone. This C type is the Mk 1 version with the goggle retaining straps at the front which were designed to hold the goggles in place. This feature was removed on the Mk II ‘C’ type helmet. Personally the loops don’t work very well which leads me to believe they were designed to work with the Mk IV goggles and not the Mk VIII.  The goggles are the Mk VIII RAF issue goggles circa 1943 with issued tinted lenses. The lenses were optional and the user could choose between tints and clear laminated lenses. (On the left ear cup is a personal modification to allow for a CEP ear transducer fit to help save my hearing!) 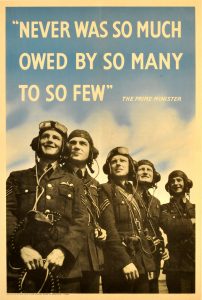