Waistcoat styled life preserver made of yellow fabric, self-inflating, with fitted horizontal webbing ‘grab handles’ to the front. Two cylindrical pockets have been added to the right side (for housing the floating lamp and battery pack) and fabric leg ties are fitted. The waistcoat is closed by three buttons (one is missing) and two horizontal fabric ties. The whole is very dirty and well-used.

Inflated by a carbon-dioxide cylinder, the 1941 pattern Mae West Life Preserver was made of yellow fabric, enabling the airman to be more easily detected and therefore rescued if he should bale out of his aircraft at sea. The 1941 pattern was constantly modified, and this example has several features that indicate late-war production; for example, extra pockets for housing the lamp and battery pack, the webbing ‘grab handles’, whistle pocket, and line/connector for the K-dinghy pack. (IWM)

Floatation stole for the 41 pattern vest 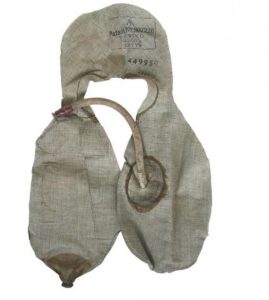 1941 pattern stole – The Stole for the 1941 pattern Mae West – Stores reference 22c/72.  Grey rubberized cotton stole for the 1941 pattern Mae West. You can see the manual inflation tube on the right which has a similar valve to the 1932 pattern stole. On the bottom left lobe of the stole you can see where the CO2 bottle is fitted for manual activation of the CO2 bottle trigger. (Picture with kind permission Historic Flying Clothing) 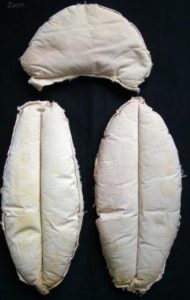 Kapok Pads – Stores ref. 22c/93. Full set of three pads. Calico cotton pads stuffed with kapok. The neck pad is Air Ministry & King’s Crown marked. The idea of the internally fitted kapok pads were to provide a minimum floatation should the bladder be damaged or the airman unable to inflate his jacket. When the pilot or airman wore his vest he would normally have one breath of air in the stole or bladder which would allow some floatation should the airman end up in the drink!

As we know you cant have to much air in the stole as it will inflate as you climb to altitude as the gas inside expands so only a small amount air would be in side the bladder.

If the airman parachuted in to the sea the jacket which would be worn under the parachute could not be inflated until the parachute had been released from the body so it would be at times like this when the kapok pads would provide some buoyancy. (Picture with kind permission Historic Flying Clothing) 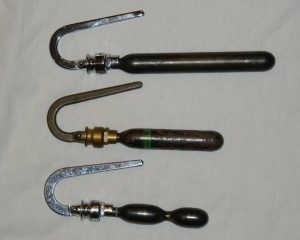 CO2 bottles – Air Ministry Life Jacket Inflation Bottles: Shown are the 3 types of co2 bottles used by the RAF and Commonwealth during WWII: Top is the bottle used in the Harness suit (1939-40).

Middle is the first type used in the 41 pattern vest (1941) and bottom is the improved 41 pattern bottle (1942) to reduce the flow of gas by necking the bottle.

All bottles were used with the same lever mechanism. The chrome levers were early and the bronze and brass lever was mid to late wartime made. Gas was released by pulling down the little flap on the lower right side of the life vest. As the lever rotated down, the brass threaded stud snapped off releasing CO2 into the bladder. (Neil Seaton) 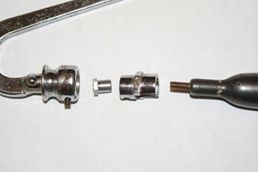 Trigger mechanism – All bottles were used with the same lever mechanism. The chrome levers were early and the bronze and brass lever was mid to late wartime made. Gas was released by pulling down the little flap on the lower right side of the life vest. As the lever rotated down, the brass threaded stud snapped off releasing CO2 into the bladder. (Neil Seaton)

Dye Pack – Stores reference 33c/951.  Late war pattern fluorescene dye pack as fitted to the 1941 pattern Mae West.  It is formed of two pouches, an inner cotton one, approximately 14 x 6cm filled with fluorescene powder and sealed.  This is contained within a second larger rubberized fabric pouch, approximately 19 x 11cm with webbing tapes attached at one end.   The inner pouch is attached via a short string lanyard  to the webbing of the outer pouch.  The dye pack  was placed in the pocket/flap on the lower left side of the Mae West  under the serrated edging, and the webbing securely stitched to to the reinforcing tape of the pocket.  The pocket flap was then lightly tacked with locking thread such that when the webbing on the pocket flap was pulled by the airman it would rip open not only the pocket but also the rubberized pouch, thus exposing the fluorescene pouch to the water. (Picture with kind permission Historic Flying Clothing)

I have always wanted a working Mae West and now I have one…. I purchased a museum copy and had the vest re enforced with parachute grade sticking. I then added modern reproduction kapok pads as per the original to give some buoyancy with out inflation. I then added a modern bladder with CO2 manual inflation, automatic inflation and manual inflation…. I have tested the vest in different scenarios and I have had the vest inflated fully for over a week with no deflation, holes rips or tears! I now have a modern beacon fitted where the old esko light was housed, a modern flare gun and a modern dye pack so its now fully functional as a SOLAS piece of kit….. This will do the job now for those trips to France! 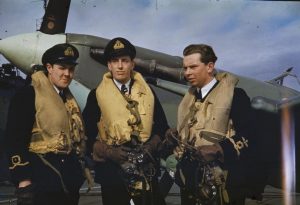 Three Fleet Air Arm pilots wearing ‘Mae West’ life-jackets wait for the order of the day on board an aircraft carrier. A Supermarine Seafire can be seen in the background.