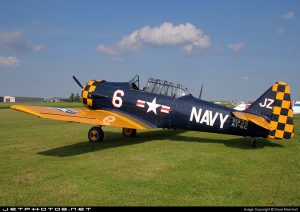 Built in Dallas as an AT-6C-NT Texan for the USAAF in November 1942, under contract AC19192, it was allocated to the RAF as a Harvard IIA, but was then delivered to the South African Air Force, one of 436 shipped overseas. It stayed with them until 5thAugust 1969 when it was sold to the Portuguese Air Force as part of Operation Oasis, being used as a gunnery trainer at Sao Jacinto, until 1978 when it was struck off charge. In March 1979 it was placed onto the British Register and given the apt registration – G-TSIX. The Harvard is painted in spurious US Navy SNJ markings as 111836/JZ-6. 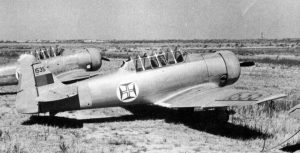 G-INFO gets it wrong again…..built in 1948. Haven’t a clue where they got that from.