Tomcat on patrol near Tiaret, Algeria, 1958

Our Texan was constructed in mid 1942 as an AT-6D model (Bu No 42-4415) by North American Aviation Inc (NAA), Dallas, Texas (many were built at their plant in Inglewood, CA but are not ‘true’ Texans). At that time she would have cost the US taxpayer the sum of $18,275.00. In August 1943 she flew to the USAAF Advanced Pilot School at Napier Field, Alabama and her career as a pilot maker began. Many hundreds of American, British and Commonwealth pilots would have flown her before getting their wings and flying off to war across the globe. After periods at Craig Field, Alabama and Independence Field, Kansas, Texan Tomcat was placed into storage in June 1947.

Tomcat in French service in 1961

In March 1952 our aircraft was returned to NAA at Columbus Ohio for remanufacture as T-6G model Texan (Bu No 51-14700). This included overhauling the airframe, strengthening the wings and updating various systems. After her refit, our T-6 served with the 3301st Pilot Training Squadron at Columbus AFB. After three years moving around she was surplus to requirements again as the jet age loomed. Briefly at the ‘desert boneyard’ – Davis Monthan, AZ, she was transferred to the Mutual Defence Aid Programme in January 1957. MDAP was a US backed scheme to bolster friendly countries against the Communist threat and later that month our aircraft was purchased by France for $2000 and shipped to Europe. Now known as ‘114700’ she was modifed as a Counter Insurgency (COIN) ground attack aircraft with the installation of SNEB rockets, 7.5mm machine gun packs and MATRA rocket pods.

Then with the 4/72 Squadron, Ground Support Light Aviation Command she was sent to Tiaret, Algeria to serve in the conflict there (1954-1962). It was at this stage that the COIN T-6s were nicknamed ‘Tomcats’ by the French – because of their ‘growl’. After over 6000hrs of training and combat sorties she was dropped from the French Air Force inventory in 1965.

Tomcat derelict at La Ferte Alais in the 1970s 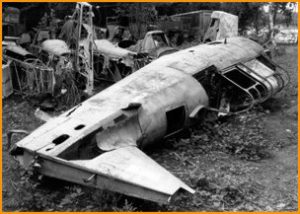 Little is known of her after this period, but by 1979 she lay derelict with other T-6s at La Ferte Alais, Paris. Shipped to the UK in 1984, she became a film star when mocked up as a zero for a ground sequence in Steven Spielberg’s epic ‘Empire of the Sun’. She then passed through several owners until being obtained by Tomcat T-6 Restorations in October 2001.

Tomcat at Bruntingthorpe in August 2005 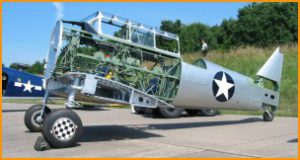 We intend to restore her to airworthy status over the next few years and in addition to the Beech will help to form a collection of significant US training aircraft from WW2. Our T-6 is particularly rare as she has documented combat history! She will once again wear wartime US markings when rolled out at the end of the restoration. Yellow wings, silver fuselage and black and white chequerboard cowling, with ‘buzz’ number E471 (E= Napier Field) circa 1943. Some artistic licence is used here, however no comprehensive policy (save for stars ‘n’ bars and ‘buzz’ numbers) was ever decreed by the USAAF – it’s what she could have worn. However, she would have had a checked cowl at Moore AFB in the 1950s.

We have managed to build up a considerable T-6 spares holding for her and look forward to the fresh challenge that Texan Tomcat provides. At present her fuselage frame has been fitted out with controls and ancillaries and mated to her centre section, she was lowered on to her undercarriage early in 2005 and the canopies have now been fitted. Texan Tomcat has nose art already – Tom Cat (from Tom & Jerry) in the pose of the mascot adopted by the Grumman F-14 Tomcat jet fighter – complete with six-shooter.

Alan Longstaff My son Ben and I ,have been priviliged, to be part of the team and to assist with the work on theT6 over the last few years. Although if you look at the aircraft now,it doesn’t seem as if much progress has/is being made,the airframe is no at the system fitting out stage. We have fitted all the control cables now and once a customers Harvard has been finished, we will start to refit the hydraulic systems.As Ben says in his narrative,TT is a rare machine,certainly in Europe, as she was originally a ‘D’ model. These were designed as gunnery trainers, which meant that the rear seat was able to pivot,to allow the trainee gunner to face backwards and use the rear mounted macine guns. If you get the chance to inspect the airframe, you will see the vertical tube mount for the seat is still in situ,although no longer used as there is a rear bulkhead mounted seat fitted now and the stbd fuselage frames,bulges out, to allow clreance for the gunners legs as he swivels round. When we go again, I will take some pictures to illustrate the differences. If you search youtube for the Kermit Weeks section,there is a film on there showing his T6D in action,with a working rear swivelling seat and gunnery canopy.