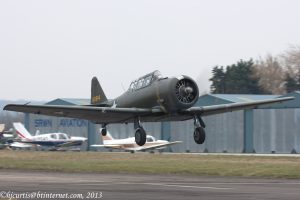 G-KAMY – The North American AT 6 ‘Texan’  is the USAAC version of the very successful Harvard family, dating back to the late 1930’s. There were over 17,000 of the generic type built, either as Harvards (built for British and Commonwealth air forces), SNJ’s with a deck hook for the US Navy or T6 Texans for the US Army. It is a firm favourite with many pilots and a considerable number of aircraft still fly, racing at Reno or displaying solo and with formation teams worldwide. Pop star Gary Numan and Lt Norman Lees RN operated successfully as the ‘Radial Pair’ in the UK airshow circuit in the late 1980’s. It is recognised as the  standard ‘stepping stone’ trainer for all larger engine warbirds.

This Texan was built in 1942 and is one of 3,000 AT6-D models. It differs from the basic Harvard pilot training aircraft in that it has a fixed forward firing .30” machine gun (firing through the propeller arc) and the rear Perspex canopy opens forward, leaving the rear aspect clear to fit a pintle mounted .30” hand operated machine gun. The rear control column, normally for the instructor, pulls out easily and the seat swivels 180 deg in this role to allow the gunner to fire over the tail. The type was used in action in both Korea and Vietnam as a Forward Air Control platform and by the British in the Mau Mau troubles in Africa.

G-KAMY was previously registered in Norway as LN-AMY, but has resided in this country for many years and recently joined the UK register, retaining a USAAC colour scheme. It is powered by a 9 cylinder radial Pratt and Whitney Wasp 1340 engine of 600 HP driving a constant speed propeller. This gives it a cruising speed of about 160 mph and a top speed of 250 mph with a range of about 750 nm. Fuel consumption is eye watering by today’s standards, 72 US Gals/hr at full power, though this does come down to a more reasonable 25 Gals/Hr (95 litres/Hr) at economical cruise settings. It is fully aerobatic but in deference to it’s age we restrict manoeuvres to smoothly applied and a maximum of +4g. Flaps, undercarriage and brakes are hydraulic. Tail wheel locking is unique, in that to unlock it the stick is held fully forward, in which state it becomes very ‘lively’ and is only used to manoeuvre slowly in tight spaces. With the tailwheel locked there is a certain amount of rudder authority steering the tailwheel. The flying controls are manual and somewhat heavier than fighters of the day, but is a good training feature for our modern day pilots and quite a pleasant change when they convert to Seafire or Sea Fury.

Tim Manna owns this aircraft and is a generous benefactor of the RN Historic Flight, allowing the use of G-KAMY for pilot training of helicopter or Jet pilots destined for the Flight’s heavier engined warbird types, and continuation training once there. Neither Jet nor Helicopter disciplines lend themselves to piston engined tailwheel aircraft such as the Swordfish, Seafire or Sea Fury. The Texan provides the prospective warbird pilot a little heavier piston handling experience and is invaluable as a training and assessment aircraft. It is quite twitchy on the runway with a reputation for ground looping and teaches pilots to notice the slightest movement in heading and correct it immediately before it becomes a problem. Supercharged, with constant speed prop, retractable undercarriage, quirky taxiing, swinging under power and reasonable gyroscopic effect all help broaden the pilot’s experience beyond  the Historic Flight’s normal trainer, the DH Chipmunk. Carrying out practice displays at realistic heights also prepares the trainee warbird pilot for the experience, dangers and safe completion of low level aerobatics, but under controlled and supervised conditions. Taking off and landing the T6 from the back seat is not easy and the view not dissimilar to that from the bigger piston warbirds.