G-DDMV was originally built in 1943, although all records of her service have disappeared.
During 1949 she was returned to the factory for upgrading to T6G standard and re-emerged with the serial 49-3209.

After serving with various training units she was delivered to the Haitian Air Force on August 26th 1957 and given the serial 3209. The Haitian Air Force took delivery of 10 T6G, some of which were used as armed aircraft and used to counter incursions from the Dominican Republic by revolutionaries. 3209 was returned to the US during 1982, possibly the only survivor of the Haiti T6s.

She was sold at Auction to Larry Johnson and entered civilian life with the civil registration of N3240N. Initially she was ferried to Miami Florida, registered to Nostalgia Aircraft Inc and painted in a yellow US Navy colour scheme. By 1986 she had been registered to Nostalgic Aircraft Service, still in Miami where she remained until 1988 when she was sold to Jim Carlin of Delray Beach, Florida.

A year later she was sold to Paul Morgan and brought to the UK and registered as G-DDMV on 30th April 1989, at this point she was based at Sywell. By 1990 she had been changed into California Air National Guard markings which she remained in when sold to Colin Dabin. Her base remained as Sywell but she also spent time at Rochester Airport.

During 2013 she suffered a catastrophic engine failure which saw her languishing in a hangar at Headcorn until Aero Legends purchased her in January 2015 for a full overhaul and to have a new engine fitted. Work is to start immediately with a hoped for completion by the end of April. 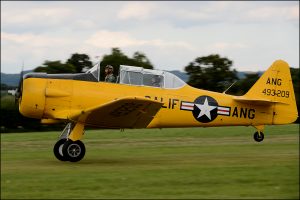