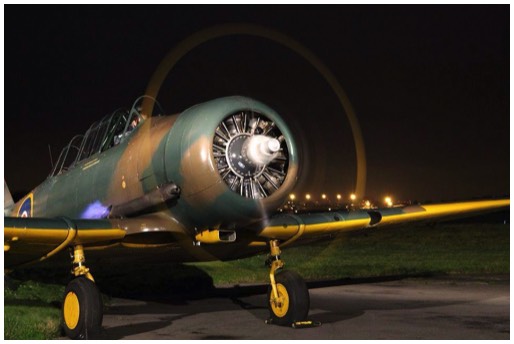 G-CTKL – Kilo Lima – Europe’s Oldest Harvard G-CTKL was the 31st Harvard Mk.IIB to be produced by Noorduyn, and unlike most of the 3400 Mk IIBs built by this company for Lend-Lease use, this example and the first 210 machines were supplied directly to the Royal Canadian Air Force. Kilo Lima is the third oldest airworthy Mk.IIB today, the oldest being C-FNDB, which being RCAF 3039, was the sixth Mk IIB to be built.

Completed on the 23rd July 1941 by Noorduyn at Cartierville, Montreal, the Harvard was delivered to the Aylmer the following month, becoming RCAF 3064. On its delivery flight from Uplands to Alymer, it suffered aileron lock up over Trenton, where the pilot F/Lt ‘Bitsy’ Grant made a precautionary landing there. It soon entered service with the 14th SFTS at Alymer, where it served with both A and C flights with the line number ‘59’ painted on the fuselage side. 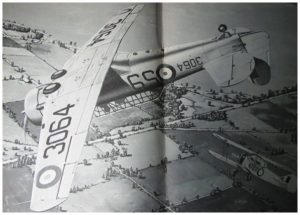 A month later, like most other Harvards, it suffered its first ground loop. Len Morgan is a regular contributor to FLYING magazine with his Vectors column, past his ‘Wings test’ at Alymer. This was his final flying examination before he received his wings. After landing, his instructor sent him up solo, saying, “Do anything you like!” The aircraft he flew for the next forty minutes was RCAF 3064. Even after 55 years, he still remembered that very flight.

Len Morgan – Course 37 No. 14 Service Flying Training School Aylmer – Our class was two-thirds Canadians, the rest British, Australians and Americans. Speech-wise, the Canucks and Yanks were indistinguishable. We Aylmer students were divided into three flights. The Harvards assigned to each flight bore distinctive hubcaps. There was much rivalry between us for the least bent props, smashed wingtips and wheels up arrivals. Infractions required contributions to the “Rumble Fund,” ranging from 25 cents for taxiing in with flaps down to $5 for a belly landing. My ground loop cost $2. 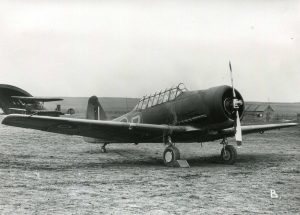 G-CTKL Left – Harvard IIB FE788 (markings now worn by CTKL) at Boscombe Down in 1944. Note the Hillson Bi-Wing Hurricane in the background.

In June 1942, it suffered an accident at R-1 (St.Thomas Relief Field), where the Harvard flown by a J.Kerman allowed the aircraft to strike the ground heavily when landing. The cause of the accident was put down to pilot error. Five months later, it had another accident when taxiing. The Harvard was then placed into storage, pending a rebuild.

Rebuilt in May 1944, RCAF 3064 was once again placed into storage, until 1948 when it was transferred to the 1st Flying Training School at Centralia, north of London, Ontario. Three years later, it was on charge with No.424 Auxiliary Air Force Squadron at Hamilton.

The Harvard wore the codes ‘BA-?’ No.424 Sqn was formed at Hamilton on the 15th April 1946. The Squadron flew Mustangs in the fighter role until September 1957, when it was re-assigned to light transport and emergency rescue role and re-equipped with Expeditors and Otters.

In 1952, an MN31 Radio Compass was installed, thus making the Harvard an Mk.2A. This was an RCAF only designation and should not be confused with the Mk. It was built by North American and supplied to Commonwealth countries. Canadian Mk.2A’s were post-war conversions of standard Mk.II’s and Mk.IIB’s to armament and wireless trainers. 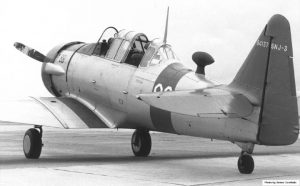 Transfer to the Italian Air Force – MM54137 – In November of the same year, the aircraft was transferred to the Royal Canadian Navy at HCMS Shearwater, Nova Scotia, with either VC920 Sqn or VT40 Sqn Instrument Flying School. After being overhauled by Aircraft Industries of St.Johns, Quebec, the Harvard was struck off charge. On the 15th April 1957, the Harvard was delivered to the Italian Air Force (AMI) and was allocated the serial MM54137 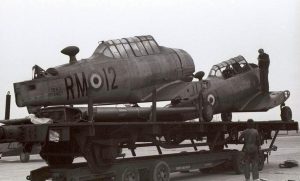 By 1965, it was on charge at Lecce and served with the Scuola Volo Basico Iniziale Aviogetti by September 1972 at the latest. In September of the same year, it was transferred to the Reparto Volo Regione Aerea No.2, where it wore the codes RM-12.

Seen here (Left) Being delivered by train across Europe and then shipped over the Channel at its Italian service. (Photo Contribution by Martin Pengelly)

G-CTKL transfers to the civilian register

The 14th June 1974 saw the Harvard make its last Military flight, after which it was placed into storage at Bergamo. Total hours to date were 9,539 hours. Disposal was handled through the USAF, as the aircraft was supplied to Italy under the MDAP.

1981 – 1983 – On 21 November 1981, the Harvard arrived at Southampton docks with three other airframes. These had all been purchased by Robs Lamplough and had been roaded through France before being shipped across the Channel. All four machines were stored at Botley in Hampshire after spending a few weeks at the old Supermarine works at Woolston.

1983 – 1987 – saw the Harvard acquired by Tim Lane and was then moved to Toller Porcorum in Dorset the following month. The registration G-BKWZ was originally allocated, but this was soon changed to G-CTKL, these being the owner’s initials. After four long hard years of restoring the trainer, the first engine runs were made on 21 April 1987. 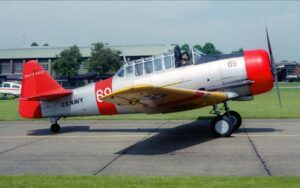 1987 – 1989 – Acquired by Jeff A Carr at Dunkeswell – The wings were then detached, and the Harvard was on its main wheels to Dunkeswell Airfield in Devon for final assembly and preparation for ‘first’ flight. The Harvard is painted to represent an SNJ-3 of the US Navy in 1941. The idea for this scheme was taken from the front cover of the book ‘Pilot Maker’. The aircraft was owned by a NATA member Anthony Williams and was based at North Weald, Essex. There were plans to paint the aircraft in its original colour scheme, the colours it wore when it first saw service at Alymer in 1941. 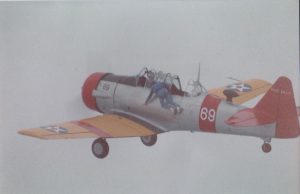 Jump Ship – This is a cool pic of Andy Guest (RM Freefall team) jumping from G-CTKL … This is the third type of exit Iv seen from the T6… (Top of a loop and the bunt exit “my fav”). This is probably one of the riskier exits as it’s directly in line with the tail… However, he got away with it and tucked it under the tail with no incident? As you can see, the wheels are down, so I guess the pilots IAS is around 70/75 mph – I suspect this was taken at Dunkeswell around 1987-89

2002 – present-day – Acquired by Mike Simpson and based at North Weald.  Currently, the aircraft resides at the Biggin Hill Heritage Hangar amongst some of the finest warbirds housed under one roof in the world… More details coming soon! 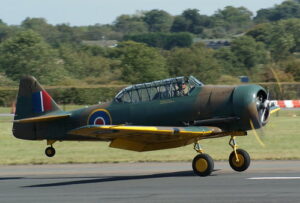