KF183 was built in 1944, making her, without doubt, the longest-serving aircraft in UK history…possibly even the world! She has accumulated well over 15000hrs in the air where she has been used as a photo-ship for drops on Salisbury Plain and by ETPS for tail dragger courses. 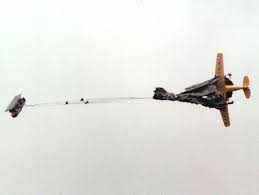 INTRODUCTION
This paper relates how a North American T-6 Harvard to chase aircraft ended up colliding with the parachute of a 1-ton load being dropped from a C-130 Hercules during a routine airdrop trial. The way things turned out that day in June 1991 gave a whole new meaning to the phrase “pushing the envelope”! The paper will cover the various factors involved in bringing about the circumstances that led to the incident. Lessons for the future will be drawn from this sorry tale with a happy ending.

The Pilot. The author of this paper was the T-6 pilot, who was appointed as Wing Commander Flying at what was then the Aeroplane and Armament Experimental Establishment (A&AEE), Boscombe Down, the UK Ministry of Defense’s prime development flight test facility. Among the many duties I had, and one of the more pleasurable was that of T-6 chase pilot. At the time of this incident, I was also the base check pilot for the T-6 and supervised all the other pilots who flew it and checked out the new ones. The T-6 Harvard. At one time Boscombe Down had three T-6’s, at the time of this incident there were two. 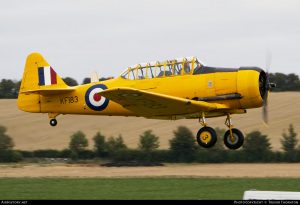 These aircraft had all been in the flight test business since the 1940s and still had a unique capability in the photo-chase of parachute trials. The T-6 rear cockpit canopy opens in flight with no speed limit and that affords an optically perfect view all around the aircraft for the close-up video recording of the behaviour of parachutes, rigging lines and load suspension equipment on air-dropped loads. The aircraft platform also allows a view from above, which no ground-based cameras can achieve. The T-6 Harvard had proved to be rugged, easy to maintain, cheap to operate and with performance and handling qualities excellently matched to the job. So there was never any good reason to get rid of it. Anyhow, it is a fun machine to fly and all the decision-makers got to fly it, so they weren’t about to dispatch it to the breakers yard! The C-130 Hercules. The C-130 Hercules was the standard air-drop platform for all the parachute trials at Boscombe. For many years one C-130 had been on the Boscombe Down inventory, with a dedicated crew for these sorts of trials; the flight test aircrew flew it when any other flight test activities dictated. The “Peace Dividend”. When the Berlin Wall came down in 1989, our politicians suddenly invented something called the “Peace Dividend” and Defense Budgets started being pruned. In the UK, as in most western nations, the armed forces now had to deal with annually deflating defence budgets and steadily increasing new operational commitments, such as Desert Storm and operations in former Yugoslavia. One of the results of the cut-backs was that A&AEE was driven to the decision to release the dedicated C-130 back to the RAF, along with its 4-man crew, so making a significant saving on the operational budget. However, the parachute trials still had to be flown. This was to be achieved by the use of the RAF’s Tactics and Trials organization, which had its own dedicated C-130 for the similar work of the development of tactics and equipment related to airdrop activities. It was agreed that A&AEE would send its experimental loads, along with their specialist flight test personnel, about 40 miles by road to the RAF trials unit at Brize Norton, and the trial would be mounted from there.

THE SEQUENCE OF EVENTS. 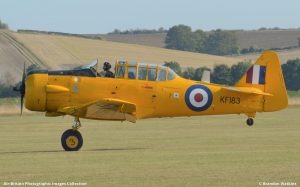 The incident occurred on 14 June 1991. I had received prior notification of the trial, using the new arrangement with the RAF C-130, on the previous day. At the time I was checking out a new Harvard pilot to replace one who was retiring. As the trial sortie was to take place at 11 am, I decided that I could fly a dual sortie before the trial flight. The photographer would get aboard during a shortstop, fly the chase sortie and then we could have the aircraft refuelled over the lunch period, before another dual flight in the afternoon. On the day of the incident and to save time, the trials sortie was briefed before starting the first dual flight. A standard Parachute Trials Brief form was available for this, but no trials personnel were; they were all on the road. The paperwork indicated a routine para-drop sortie with two 1-ton loads. The brief also contained a note about 8 paratroopers to be dropped after the two loads, but that was not part of the trial. The trial was of a new type of connector between the load suspension system and the parachute rigging lines and that would need to be targeted with the camera. That meant a quick turn-in and dive to get close and alongside the load, rather than above it. After a telephone brief with the C-130 captain, we agreed a rendezvous time and join-up procedures overhead Boscombe Down before the 5nm transit to the Drop Zone (DZ). The C-130 captain confirmed that there would be two 1-ton loads and that he would not drop his 8 parachutists until the T-6 was clear of the DZ. After the first dual trip, the photographer and I met up, went over the trial protocol and then we climbed aboard the T-6. After getting airborne at the prearranged time and making the rendezvous with the C-130, the two aircraft headed towards the range information. I awaited a call to change to the range frequency, but by the time that we entered range airspace, I had heard nothing, so I changed to the Trials frequency.

There I heard the end of a conversation between the C-130 captain and the Range Controller. I checked-in and was told that there would be two loads, as briefed, and that the parachutists would be dropped after the trial was complete and the chase was clear of the range. We then flew the pattern and, as was normal, completed a “dry” run with no load dropped and then set up for a “hot” run from the second pattern. As the first load came over the ramp I started my turn in to get us as close as possible. I overbanked to lose height and, as was my habit, glanced left at the C-130. Simultaneous with a strangled cry from the back seat, I saw the second load falling over the ramp. There were also several pale-faced figures in flight suits watching in mute fascination! I instinctively applied full throttle and pulled hard to get away from the now blossoming parachutes. Suddenly the world went dark green. I held the throttle fully forward and waited, totally frozen on the controls. I remember wondering what the sensation of falling backwards as the load dragged us down would be like. As that thought formed in my mind, the world turned blue again! There seemed to be little damage to my aeroplane, but I couldn’t say the same for the second load! It was accelerating earthwards with shredded rags following it! The T-6’s engine was still functioning normally so I headed home for a precautionary landing. Back at the ranch, we found lots of bits of a parachute in the most unlikely places, but any real damage was superficial.

What went wrong? That was the first question everybody asked. The obvious answer was that I didn’t know that the C-130 crew were going to drop both loads on the same run. Why didn’t I know that? There were several reasons: Habit. First there was the “we never did it that way before” syndrome! So I reverted to habitual procedures. Common Sense. Second, there was no good reason to drop the loads together. It made sense that the trials team wanted maximum video of the new piece of equipment, which was on both loads, and it made no sense not to be able to follow each load down individually. Communication. Third, nobody had actually told me that the loads would not be dropped individually. When I had spoken to the C-130 captain on the phone, he said that there would be two loads. I assumed that would mean two hot runs: he knew they would be dropped consecutively and assumed that I did too! When we joined formation overhead Boscombe Down, I expected, in keeping with our normal procedures, to be called over to the trials frequency. In fact, his co-pilot was already speaking with the range controller on one of the C-130’s many radios. My aeroplane had only one radio box and when I changed to the trials frequency all I heard was the end of their pre-drop confirmation brief. I missed the vital information about there being only one hot run with both loads dropping in sequence! Assumptions. If I had heard all the radio conversation, I would have known that they intended to drop both loads on one run. They assumed that I had heard it all and I assumed that I knew what was going to happen, so I assumed that I hadn’t missed anything important! Organizational factors. The pre-trials paperwork was simple and was laid out in the way I had expected for separate drops on two runs. However, it was not explicit and when I re-read it after the flight there was an ambiguity, which I hadn’t questioned because my expectation was that we would do it as we’d always done it! This was one of the first such trials using the new arrangement we had put in place to get around our budgetary problem. We were all doing what we were used to but somehow the basic procedural and operational philosophy differences had not been addressed.

As usual, 20-20 hindsight helps. The lessons were so obvious. When you make major organizational changes – make sure you are all on the same song sheet. Just because another agency does some trials work, don’t assume they do it the same way as you do. Arrange for cross-agency visits and meetings, as well as much exposure to each other’s trials as you can afford. Communication is the responsibility of the sender. If you need to let someone know what’s going on – make sure they are listening! Get feedback if you are not 100% certain you know what is going on. Knowledge beats assumption at any time. You may think you know what to expect: make sure that you KNOW you know. There’s always an emergency you never thought of waiting around the next corner. It’s easy to get into a rut with chase work – every now and then sit down and think out what’s the worst thing that could happen at the most inconvenient moment. Then work out what you will do about it. When it all goes dark – don’t panic! It will soon come