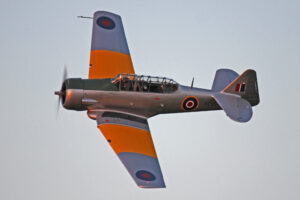 Following refurbishment, Charles Babb Co. sold it to the Swedish AF and shipped the Harvard IIB to Sweden in 1947.  After being assembled in Sweden on 3 September 1948 it was delivered as a type Sk.16A serial Fv16128 to the F18 wing of the Royal Swedish AF.  Sk.16A Fv16128 served as an advanced trainer with the Swedish Air Force from 20 September 1948 right up to 29 August 1969, when she was withdrawn from use. After being wfu from the Swedish AF, the aeroplane, including engine, instruments and other equipment, was handed over to the Stockholm Technical High School as an instructional airframe. In 1973, the aircraft was added to the collection of the Luftfartmuseet at Arlanda.  As a new Aviation Museum, the airframe was, at least until 1979, stored in crates at Bromma Airport, awaiting the final establishment of the museum. 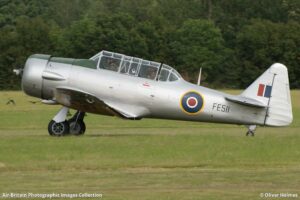 In 1987, Pär Erixon from Angerod bought the Fv16128 airframe from the Arlandasamlingarna (the Arlanda museum collection). Pär Erixon commenced the restoration of the aircraft at Göteborg. The restoration project stalled and in 2005 was sold to Stefan Sandberg & Niclas Amrén from Sigtuna, who went on with the project at Håtuna. In 2008, registration SE-BII was reserved for the North American AT-16 Harvard IIB, and on 5th September 2008, taxi trials with the aircraft were done at Håtuna, followed by the first flight on 21st April 2009. The aircraft was painted in a blue and white fantasy colour scheme like a Reno racer with USAAF marking and a ‘Checker Tail’ painting and race number ‘7’ on the engine cowl. 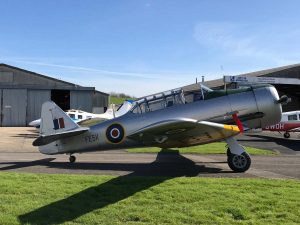 In October 2015, the aircraft was sold to UK based Hurricane Holdings to restore the Harvard IIB to her original wartime paint scheme. On 29th October 2015, SE-BII arrived at Old Warden aerodrome near Biggleswade for restoration work. On 1st February 2016, registration SE-BII was cancelled as exported to the UK, and, on 2nd February 2016, the aircraft was registered G-CIUW to owner James Brown of Oxford.  After months of painstaking work by the teams at RGV and Ardent Paint Care in Gloucester, the restoration of AT-16 Harvard Mk.IIB as ‘FE511’ was completed. On 29th November 2016, permission was issued to present the aircraft as Royal Air Force FE511 (metallic colour overall, yellow trainer-bands and RAF roundels).

Put together from internet sources by aircraft historian Brian Jones with much credit due to avia-dejavu.net site.