Ordered by the US Army during 1941, 41-33857 was nominally allocated to the Royal Air Force with the RAF serial EX884, and was delivered direct to the RAF (known in the RAF as a Harvard III) pilot training program in South Africa, arriving by freighter in November 1943. Operated by the South African Air Force on behalf of the RAF with SAAF serial 7426, she was used by the SAAF in the pilot training role until 1969 at which time she was transferred again, this time to the Força Aérea Portuguesa (Portuguese Air Force), being allocated the serial FAP 1513.

Used by the FAP until 1978, 1513 was sold by private tender to a UK based company and was delivered by sea, arriving at Martlesham Heath near Ipswich in Suffolk where she was stored with a number of other former FAP T-6Ds until she was sold, eventually ending up with Sandy Topen and his Vintage Aircraft Team (VAT), being stored at various locations including Bushey in Hertfordshire and Cranfield in Bedfordshire. Eventually sold when VAT closed down, her nomadic lifestyle continued with periods of storage at Swansea Airport before being sold to Bob Warner who used her as a spares source for a T-6 he was working on.

Purchased by CFMC from Bob Warner in 2001 and registered G-CCOY, 1513 entered a further period of storage in Norfolk before restoration was commenced in Leicestershire and Derby in the UK. A further period of storage then followed after which 1513 moved along with the rest of the collection to South-West France with restoration again commencing (hopefully to completion this time!) near Bergerac.

A great deal of the work previously undertaken in Leicestershire and Derby is being undertaken again due to the quality of finish, and when she eventually emerges she will be a shining example of North American Aviation’s finest. The current plan is for her to be put back into her old Força Aérea Portuguesa markings. While the rear fuselage had previously been restored in the early 2000s, we were not happy with the work undertaken so completely stripped the fuselage back to its basic components and structure, starting again. This photo shows the extreme tail section where normally you would see the fabricated integral pylon assembly to which the vertical fin attaches. This was completely dismantled as part of the recent restoration process and this photo shows the area prior to this being

re-assembled. The entire tail section “box” was disassembled, cleaned, treated and re-built with a number of new components. The following few photos show this process 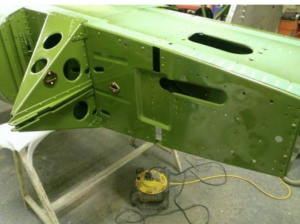 The photo on the right, above, shows the now re-assembled vertical fin pylon structure and entirely completed tail section ready for fitting the tailplanes fin, tail undercarriage and so on. The engine bearers have been stripped, NDTd to check for cracks and damage, and painted ready to be hung on the front of the fuselage centre section.