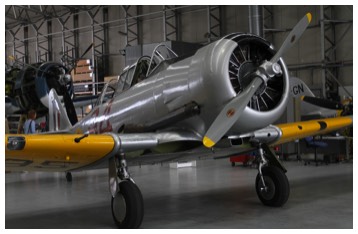 The Duxford based Fighter Collection’s Harvard was built in December 1942 as an Mk.IIb by Noorduyn Aviation in Montreal, Quebec. She was allocated the RAF serial FE695 and served with the Royal Canadian Air Force training Commonwealth pilot trainees well out of the reach of enemy aircraft under the auspices of the Empire Air Training Scheme.

The colours that she currently wears were standard for a Lend-Lease Mk IIA or Mk III serving in Rhodesia/South Africa.

Harvard FE695 was brought on charge in December 1942 with No.1 Training Command, and provided sterling service across Eastern and Central Ontario until November 1945 when she was placed into storage at Dunnville with 1449:30 hours logged on the airframe. FE695 was struck off by the RCAF in June 1947.
Following refurbishment she was taken on charge by the Swedish Air Force under the type designation Sk-16A with the individual identity Fv16105. Fv16105 served as an advanced trainer with the Swedish Air Force from August 1948 right up to March 1972 when she was given to a Technical School as an instructional airframe.