Harvard lV 1747/G-BGPB was built by the Canadian Car Foundry at Fort Williams in 1953 as part of an order for the United States Air Force and was given the US military serial 53-4619.  It saw service with the USAF in Europe and was then sold to the West German Air Force in 1958. It was delivered to the Flugzeugfuhrerschule (Pilot Training School) at Landsberg wearing the code “AA+050”.  When the School closed in 1966, it moved to the Technische Schule 1 (Technical training School 1) at Kaufbeuren as a ground instructional airframe, becoming “BG+050”.  From here it was sold on to the Portuguese Air Force and became operational at the Flight Training base at Sao Jacinta and was given the FAP (Portuguese Air Force) code 1747. When the Portuguese disposed of theirHarvard fleet in the late 1970’s 1747 was imported into the UK by Alistair Walker and Robs Lamplough and placed on the UK register as G-BGPB.

The aircraft was refurbished and placed into a Royal Canadian Air Force colour scheme and operated from Duxford in the company of Anthony Hutton’s Harvard llb FT229/G-AZKI as “The Harvard Duo”, and later went on to be a part of the 1980’s “Harvard Formation Team”.  Following a change of ownership, the aircraft was involved in an accident at Little Gransden aerodrome on 15th June 1989 and was acquired by the Duxford based Aircraft Restoration Company in September of that year.  Following completion of their second Bristol Blenheim restoration in 1993 ARC commenced on a complex rebuild of the airframe with meticulous attention to detail and finish culminating in a first post restoration flight on 23rd February 2000. 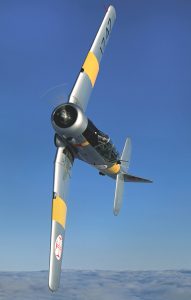 The resultant airframe is in stock condition and is immaculately finished in its original striking colours of the Portuguese air Force and is a colourful and unusual example of this famous American designed training aeroplane.  In addition to being an ideal “Warbird” conversion training aircraft “Taz” (as this Harvard is affectionately known) is able to be swiftly re-configured into an ideal air-to-air camera platform with rear canopy removed, purpose built cut-down rear fuselage top-decking and universal camera mount fitted and has been used by many of the worlds top photographers and in film and television productions including “Waiting for Dublin” and “Bomber Crews”. 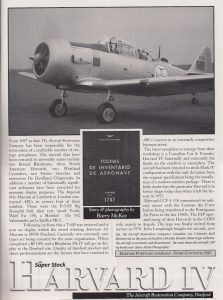