It was built by the Canadian Car and Foundry (CCF) in 1954, ordered by the American Mutual Defence Aid Programme (MDAP) to enable the USAF to train pilots and aid in establishing a new West German Air Force as a part of NATO.  Allocated 52-8562, it was one batch of 120 T-6J aircraft with serials 52-8493 to 8612 to be supplied to the USAF in West Germany.  The Americans only used the Americans’ designation T-6J to show that it was a CCF built aircraft; T-6J never appeared on any Canadian paperwork.

It was factory painted in yellow overall training scheme with full USAF national markings and large TA- ‘buzz numbers’ applied as was normal in the period.  It was almost certainly immediately crated for shipping to Europe and assembled in the huge USAF maintenance depot at Burtonwood and then flown to West Germany.   Certainly, a batch of 15 aircraft 52-8585 to 8600 was noted lined up at Burtonwood in mid-May 1955 awaiting collection, so 52-8562/TA-562 must have been through only months earlier.  The aircraft was initially operated by USAF instructors training German pilots before hand-over to the West German Air Force/Luftwaffe when formed in 1956.  The aircraft soon after acquired WGAF markings and large side-code AA+053, denoting use by Flugzeugfurhrerschule FFS-1 at Landsberg, to the west of Munich.  FFS-1 operated the majority of the WGAFs Harvards from the formation in 1956 through to 1966.  It is possible that at some stage, while with the WGAF, it was re-coded BF+053 denoting use by Technische Schule 1 (TSLw1) ground maintenance school at Kaufbeuren, but this is unconfirmed. 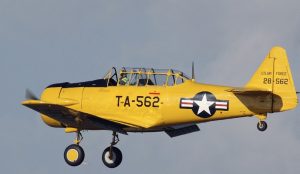 Having been declared surplus to Germany’s requirements, being an MDAP funded aircraft, it was passed on to another NATO air force, the Forca Aerea Portuguesa (FAP), with the serial 1753.  From 1966 to 1975, it was operated by the FAP, towards the end of that time operating in Portuguese East Africa, now Mozambique.  1753 is documented as having flown on armed counter-insurgency flights with the FAP.  Their Harvards were fitted with a mix of guns, rockets, napalm and bombs. When the Portuguese left Mozambique following the granting of independence in 1975 and left several aircraft behind.  It is unknown if 1753 was flown with the mostly Soviet equipped Mozambique Air Force post-independence; however, it certainly ended up parked out, slowly deteriorating in the heat.

In the late ‘80s, two South African businessmen recovered 13 Harvards and other equipment from Mozambique.  Six of the Harvards found their way to the UK, arriving at Thruxton, Hampshire on 21st December 1989 for rebuilding.  These Harvard frames were registered in Britain in March 1990 as G-BSBB to G-BSBG, although only three made it through restoration to flight in the UK.  Today these three flies in the UK, now registered as G-BSBG, G-HVRD (initially G-BSBC) and G-TVIJ (initially G-BSBE), the other 3 frames were exported onwards to the USA in 1994. Following restoration, G-BSBG was repainted in a yellow overall Royal Canadian Air Force scheme as tail number 20310, marked ‘RCAF 310’ – very fitting for a Canadian build Harvard, but totally fictitious when applied to this aircraft as it has never been anywhere near the RCAF!  G-BSBG was awarded a Permit to Fly during 1992, and ownership passed to John Woodhouse of Fleet in Hampshire. 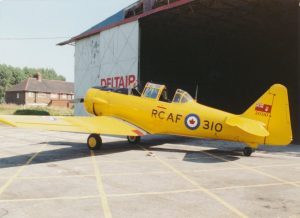 A few years later, in early 1995, it was sold to Tony St.John (who has had it now for 25 years) and was delivered from Thruxton to Liverpool Airport, arriving at 13:36 on Sunday 12th February.  It was kept at Liverpool until departure to Tatenhill on 29th November 1999, largely due to unsatisfactory hangar arrangements as the older north airfield section of Liverpool Airport moved toward closure of aviation activities.  The aircraft was based at several aerodromes around the North West until the aircraft returned to Liverpool John Lennon from Hawarden on Saturday 29th July 2017 at 13:30.  Since the return, it has been housed in the new very dry hangar No.4 with Keenair beside the G.A. apron. (Photo right  – IMG Tom McDonald LPL prints_0209)

In the intervening period, they had removed the inaccurate and now weathered RCAF markings and a  total repaint into its own genuine mid-’50s USAF colours, as worn in the period when flown by the Americans training future West German pilots in Germany, with fin serial 28562 and large ‘buzz number TA-562 on the yellow fuselage.  The aircraft is flown one or twice most months during the summer, less during the winter than in decent weather.  The big radial engine beats a distinctive and glorious sound as it departs into the circuit.

There is an early 2020 advert on the internet stating that airframe total time is 2,981 hours, and it is being offered for sale with a price tag of £135,000, not bad for what is a combat-proven war-bird, even if in a Colonial war of suppression.

An article like this is only as accurate as of the sources which include owner Tony St.John writing in the Liverpool Flying School e-magazine; website: t6harvard.com (UK Harvard, G-AZBN and look for mention of 1753 in the Portuguese Air Force at War section); G-INFO; Ken Ellis’s Wrecks and Relics; MAS and NWAN records.

As of March 2021, this aircraft has changed hands again – and has now been sold.

An article put together by Brian Jones. 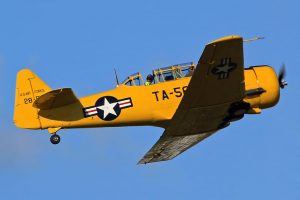 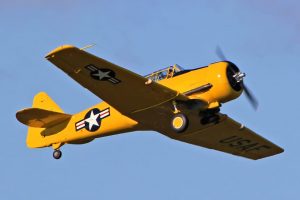