2020 – The Latest sighting of G-BRVG was during 2020, sporting its latest paint scheme seen below 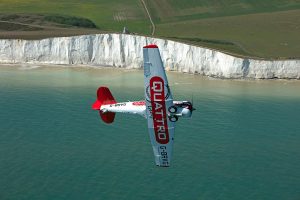 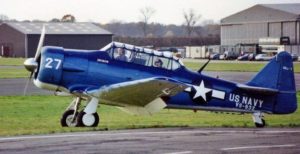 Comfortably flying…David Gilmour of Pink Floyd flying his ultra-rare SNJ-7C Bu90678/G-BRVG at North Weald in the early 1990s. Whatever the books say, that the sole surviving -7 is a fuselage stored in the States is wrong, as here is proof that there is another and one that still flies. Currently up for sale. An interesting member of the T-6 family tree – (Martin Pengelly) 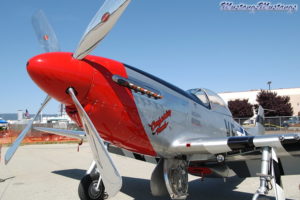 Apart from music, David Gilmour is also an experienced pilot. Under the aegis of his company, Intrepid Aviation, he had amassed an impressive historic aircraft collection. He owned a P-51 N51RR,  Stearman, a Staggerwing, Yak 50 and 52 and a Super Cub

As his venture, which had started as a hobby, he later decided to sell the company, was becoming too commercial for him to handle. In an interview to BBC, he stated – 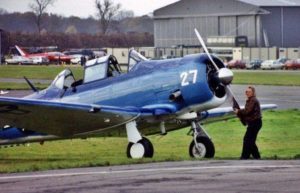 “Intrepid Aviation was a way for me to make my hobby pay for itself a little bit, but gradually over a few years, Intrepid Aviation became a business because you have to be businesslike about it. Suddenly, I found that instead of being a hobby and enjoying myself, it was a business, so I sold it. I don’t have Intrepid Aviation any more. I have a nice old biplane that I pop up, wander around the skies in sometimes…” On 22 May 2008, Gilmour won the 2008 Ivor Novello Lifetime Contribution Award. 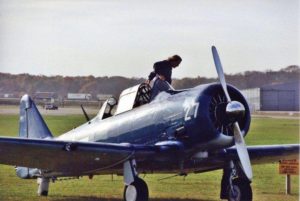 David Jon Gilmour, CBE (born 6 March 1946), is an English musician, singer, songwriter, multi-instrumentalist, and a WW2 SNJ-7 Harvard Pilot. He is best known for his work as the guitarist and co-lead vocalist of the progressive rock band Pink Floyd. It is estimated that as of 2012, the group have sold over 250 million records worldwide, including 74.5 million units sold in the United States.

In addition to his work with Pink Floyd, Gilmour has produced various artists and has enjoyed a successful career as a solo artist. He has also been actively involved with many charities. In 2005, Gilmour was appointed CBE for his services to music. He was awarded the Outstanding Contribution title at the 2008 Q Awards. In 2011, Rolling Stone magazine ranked him number 14 in their list of the greatest guitarists of all time. Brendan Walsh, The Intrepid Aviation Manager, with his hand to his face and facing his wife, Alison. Her mother is on the right of the picture… One of the rarest of “Harvard’s” found today is this beautiful SNJ-7. Only 6 were converted from older SNJ airframes. The project was akin to the USAF T6G program but was cancelled due to the deliveries of T-34’s and T-28’s Martin Pengelly.