1944 June – Serving with No 8 SFTS, Weyburn. Overall yellow, black serials. Photo-CAHS Journal Vol.9 No 2 1971. No 8 SFTS flew Harvards from Weyburn from 22 Jan to Jun 1944, and disbanded at the end of that month, due to the large reserve of trained aircrew now available.

1968 31st December – CoA expired. (As did that of fellow Fjellfly Harvard LN-BNN). Latterly stored at Telemark and Gardermoen, Norway.

(This is how it was at Southend in the late 70s, masquerading as a T-6G, original yellow paint showing through here and there. Tim Hills) 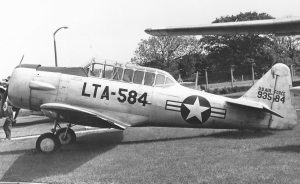 1983 10th May – Contents of Southend Historic Aircraft Museum auctioned by Philips; Harvard, then still marked as TA-392, sold for £6000 to Paul Raymond for his Whitehall Theatre of War Project, but not used there.

1983 July – To Crucifix Lane Railway Arches, London Bridge for proposed London War Museum by this date-The London War Museum had opened, minus aircraft, in March 1983 and was taken over by Paul Raymond later that year. The aircraft was stored there but did not go on display. 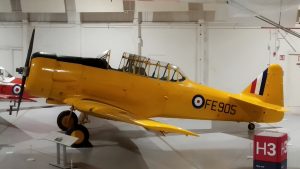 1985 March  – With the closure of Paul Raymond’s London War Museum and Whitehall Theatre of War, the Harvard was purchased by the RAFM. It was latterly stored in a barn at Ringwood Farm, Shepreth, Herts. 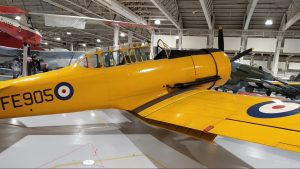 1991 19th May – Delivered on loan from Cardington to Newark Air Museum along with Oxford MP425. The photo being unloaded at Newark- Flypast Jul.91 p.34. (Phot0 Tim Hills)