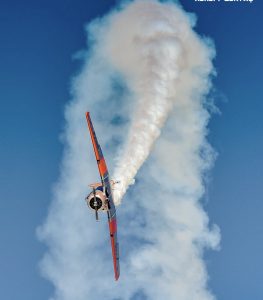 To continue from my last post about the T-28 Trojan – What I liked most about the Trojan were its predictability, throttle response and excellent controls; it seemed that at any speed, when trimmed correctly, it could be controlled easily with a very light touch and the roll rate was undoubtedly faster than the P-51 Mustang. The Trojan is powerful, sophisticated and has beautifully balanced controls. A large, exceptionally well laid out cockpit, outstanding visibility, and excellent handling. Aerobatics-wise, I would say that the T-28B could hold its own with most WW2 Warbirds, an incredibly capable machine, and here I was flying one! Who would have thought this?

Landing the Trojan was effortless as she settled nicely onto the tarmac, which was a lovely surprise. I was a little focused on the landing due to sitting so high above the ground; however, it was pretty intuitive, and I managed to land this big bird consistently. So a fantastic experience and another type in the log book!

Preparations started for the airshow on the 17th and 18th of September, and I was down to fly my trusty steed “Happy Hour,” an ex-SAAF Harvard with which I’m very familiar! I have at least 60 hours plus on this, particularly Harvard, and I’m very familiar with all its little idiosyncrasies. At the time of writing this, I have nearly 500 hours on Harvards, so I’m just about getting the hang of it! Having just flown this for at least 8 hours in the previous few days, I was ready for the next show! 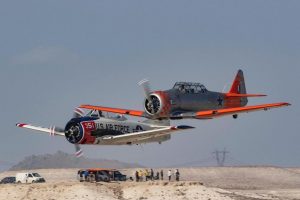 I have flown six different Harvards over the years, including my own “Wacky Wabbit”, and I have to say that Happy Hour is the best Harvard I have flown so far. It is rigged perfectly and flies as straight as an arrow. Cubans in this machine are effortless, and she flies hands off when trimmed. Unfortunately, the airfield at Sivrihisar is nearly 3000 feet AMSL, and the temperature for the airshow was in the region of about 30*c, so the Density altitude was very high, decreasing the overall performance of the aircraft, so care had to be taken when executing the moves, especially at a low level. For this reason, I completed a couple of practice displays to see how she performed, as my previous displays a few days earlier were all at sea level in Izmir. 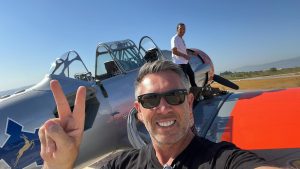