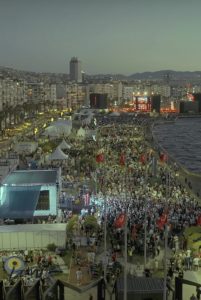 The air show at Izmir concluded with an excellent final display along the coastline on the 10th of September, with substantially fewer people than the 2.2 million the day before; I would say only a few hundred thousand, yes, just a few hundred thousand! My final display was at 19:15, and I shall never forget the giant orange sun setting on the horizon as I made my first pass. The sky was a spectacular mixture of colours, something I wasn’t used to seeing as I rarely fly this late in the evening. The display went exceptionally well, and after 10 minutes, I made my way back to Kaklıç airfield. I contacted the ATC and requested a practice display, to which they happily replied, “The airfield is yours, cleared to display” having made a few passes over the airfield, the ATC then asked if I would like to do the same at the neighbouring airport at Çiğli to which I happily obliged! By now, the sun had almost gone down, and I made my approach back into Kaklıç with the runway brightly illuminated, something im not used to seeing in the Texan, but this all added to the overall experience. 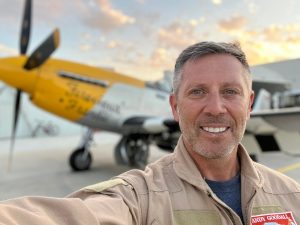 With the displays now finished in Izmir, it was time to pack up and fly back East to the M.S.Ö. Air and Space Museum at Sivrihisar, approximately 2 hours away in the Texan at cruise power. On arrival at Sivrihisar, it was time to relax for a few days and prepare for the next air show, the museum’s main annual weekend event. We expected around 30,000 people to turn up, so the aircraft had to be checked, and flight tested.

The Texan had been flight tested over the previous few days with nearly 6 hours of flying! So, my first trip was to fly the delightful Dh.82 Tiger Moth. This Tiger was made famous in the Movie ‘The English Patient.’ Which was shot in 1996. I enjoy flying this Tiger as it has an electric starter, brakes, and a tail wheel, perfect! This is how all Tigers should be! Having enjoyed a few circuits in the Tiger, it was time to get checked out the Museums 1940 and 1943 A75N1 Boeing Stearman. This was an excellent opportunity to fly a classic and a type that I had always wanted to fly. I wasn’t disappointed, and having completed the checkout with Gabriel, I went solo and then took her for some GH and circuits and bumps! Lovely!

The best is yet to come, The mighty T-28B Trojan. Built in 1955, this potent aircraft is a delight to fly with its 1,425 horsepower Wright R-1820-86 engine. So again, as luck would have it, I was checked out on this incredible aircraft.