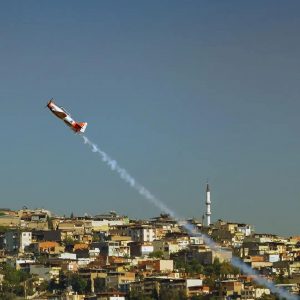 After a restful stay in the Park Inn Radisson, we returned to Kaklıç Airfield mid-afternoon, but not before going next door to the local Starbucks for some email admin and a Cappuccino or three! Preparation for the display had been done the day before, so we all knew what to expect and were able to spend the afternoon at the airfield relaxing and waiting for our slot timing.

18:00 was the display timing – “T6 Texan ready to display” – “Cleared to display”, came the reply – I dropped the nose of the Texan and looked at the vast mass of people on the coastline and thought to myself, “that looks busy” – understatement of the year! I later discovered that the air show entertained 2.2 million people on the shoreline before Tarkan kicked off his concert! Flying down the crowd line, seeing the camera flashes winking at me in the diminishing light of the evening as the sun was getting lower on the horizon, was a sight I shall never forget! Up until this point, my largest crowd was in the region of 20,000! Oddly I didn’t feel any pressure as the millions of bodies just seemed to look like one great mass and my display routine was well practised, so I just let the fun happen! The aircraft’s performance was excellent at sea level, with an outside air temperature of around 28*C. 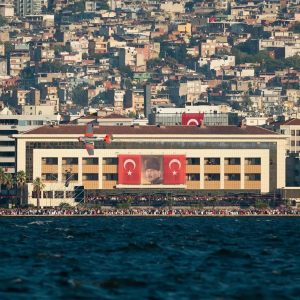 After landing back at Kaklıç, the plan was to go to the show centre for autographs, poster signing, and a quick 2 minutes on stage; this sounded fun! I was taken by road to a port on the North side of Izmir and then transported, along with the Famous Murat, the TAI Hürkuş pilot, by police boat to the Izmir South coast. This made sense as there was no way the show centre could be reached by road due to the 2.2 million people out in force! After watching Murat’s fantastic speech to the crowd to rapturous applause all in Turkish, it was my turn. I went on stage while the commentator said a few minutes about who I was in Turkish; I waved at the thousands and then left, having had my 2 minutes of fame! This is where the fun began…!

Around the show area, I was easily identifiable as a pilot by the military flight suit. I was getting mobbed for autographs, which I didn’t mind, but I needed a break. So I removed my flight suit, and suddenly, I was invisible. No one knew who I was or cared! So, with my flight suit on my back in my day sack, I foolishly decided to walk to my hotel (against good advice from the show staff) through the millions of people all waiting to see Tarkan! After feeling like a Salmon swimming upstream for 90 minutes, inhaling all sorts of odours and dripping wet with everyone else’s sweat except my own, I was spat out on a side street, annoyed at the terrible decision I had just made. Oh well, I thought, that’ll make for a good story! Thankfully my iPhone GPS got me home via the side streets of Izmir. As soon as I entered the hotel, I made straight for my room for a very long shower!