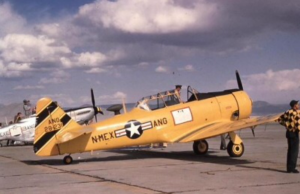 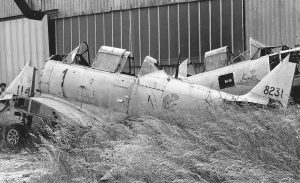 July 1956 Dropped from inventory by transferred to mutual defence assistance plan to the French Air Force. For the time being not much is known about her history except the two plates riveted on the fuselage. The first indicates the date of assembly, january 4th 1957 and the second plate indicates an inspection (IRAN), april 19th 1957, before entry into service with S/N 28231.

The Texan were mainly used by the french for training and was also used in a light attack or counter insurgency role during the Algerian War by the EALA, escadrilles d’aviation légère d’appui, armed with machine guns, bombs and rockets. As its peak, 38 EALAs units were active. The largest unit was the Groupe d’Aviation Légère d’Appui 72. The plane was phase out and put in storage in july 1965. Years later, the plane was recovered from Etampes Airfield (LFOX) in a very bad condition and stored at La Féreté-Alais Airfield (LFFQ).

Finally, she was completely restored at Bex Airfield (LSGB), Switzerland and made her first flight in spring 2000 as HB-RCN. She is now based in Lausanne Airfield (LSGL) since 2008. 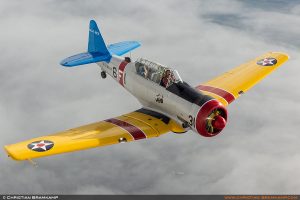