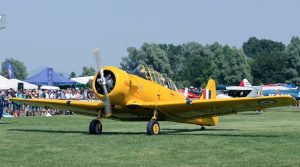 Built-in 1944 as an AT-16-ND by the Noorduyn Aircraft Company Ltd at Montreal, with constructor’s number 14A-1415. As it was built with Lend-Lease funding, it was allocated the ‘paper’ USAAF serial 43-13116 and was readied for the Royal Air Force as FT375 a Harvard IIB.

FT375 was shipped to the United Kingdom aboard the SS Esperance on April 13th 1944 and received by Rootes Securities, almost certainly at Liverpool/Speke.  After re-assembly and flight test it was despatched to its first (and only) R.A.F. unit, No.16 (Polish) Service Flying Training School at RAF Newton, on August 23rd, 1944.  FT375 will have been one of the first Harvard’s with the unit, as the unit only began re-equipment that month.  It was involved in a Category B flying accident, repaired by Marshall’s at Cambridge/Teversham, April 21st until June 11th 1945.  Shortly after the return to Newton, a further accident necessitated repair, this time by Helliwells between November 15th 1945 and April 16th 1946.  The aircraft was not returned to No.16 SFTS, but issued to the charge of the Royal Aircraft Establishment during May 1946, with paper transfer from the Royal Air Force to Controller Services (Air) on July 31st 1947. During November 1954 FT375 moved across to the Aeroplane and Armament Experimental Establishment (A&AEE) at Boscombe Down for use as a chase-plane and photo-mount.  It went on to serve with the A&AEE for over 40 years, alongside two other Harvards.  Initially silver with yellow T-bands, throughout the 70s and 80s was a gloss yellow overall with UK roundels and fin flash.

Entered into Phillip’s auction on 30th May 1996 it was sold under the hammer at £42,000.  As G-BWUL the aircraft was registered in the UK on 4th July 1996 to owner’s Nucleo Aero Acrobatico Parmene SRL, based at Parma, Italy.  It has since lived in Italy with a series of Italian owners.  Elmi SRL of Brescia from November 1997, then transferred to the US Register March 1998 as N16NA.  It was restored to the UK Register, returned to registration G-BWUL on 11th June 1999, now owned by Aereoservizi Bresciana SRL of Montichiari.  Further ownership changes to Pietro Fama & Francesco Scichilone of Rome from September 2007 and then Davide Pirotti of Torino from October 2009.  On 23rd February 2015, the UK registration was cancelled and registration transferred to Italy as I-BWUL.  Throughout the 20 years in Italy, the aircraft has retained the gloss yellow scheme with UK military markings as FT375.