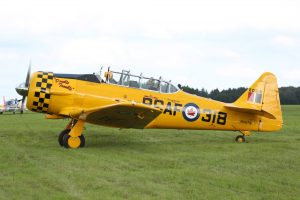 In 1952 this aircraft was built by the Canadian Car and Foundry (CCF) at Fort William, Thunder Bay, Ontario, Canada, as part of 270 Harvard Mk. IV version for use by the RCAF. On 10th June 1952, c/no. CCF 4-109 entered service with the Royal Canadian Air Force as 20318. In service with the RCAF, 20318 was operated among others with No.4 FTS at Penhold. On 20th October 1964, 20318 was Struck off Strength from the Royal Canadian Air Force, and the next day transferred to CADC – Crown Assets Disposal Corporation for sale of this surplus aircraft.

It was not until 1966 that this Harvard was sold to Skyway Air Services, Langley, British Columbia, who registered it as CF-RQC. In 1968, the CF-RQC was transferred to V.W. Garside, Wellington, British Columbia, and in 1969 to H. Conrad, Wellington, British Columbia. Followed in 1970 by E. Goertz, Calgary, Alberta, and in 1972 the aircraft was registered with R.C. Wilkinson, Calgary, Alberta.  When in 1974, the International Registration Prefix ‘CF-xxx’ for aircraft registered in Canada was changed to ‘C-xxxx’, CF-RQC became C-FRQC. In 1975, Harvard was registered with R. J. Douglas, and in 1981, with Je. Bachynski, both from Edmonton, Alberta. On 9th February 1987, registration C-FRQC was cancelled as exported to the USA.

On 25th February 1987, new marks for the Harvard MK IV were reserved in the USA for registration N59TS and NX59TS. However, neither of these registrations were taken up, and on 12th March 1987, the Harvard was registered N161FE with Fighter Enterprises, Fort Lauderdale, Florida. On 1st April 1992, still, as N161FE ownership changed to Mark IV Aviation Inc., Miami, Florida. In August 1994, the Harvard Mk IV was registered as N59TS now with Aero Toystore Inc, Fort Lauderdale, Florida. In March 1995, N59TS changed ownership to S. R. Levitz, Grand Prairie, Texas, and on 30th March 1999 to J. Gamradt, McKinney, Texas.

On 13th June 1999, the aircraft crashed during a touch and went landing on runway 35 at McKinney Municipal Airport (TKI). The pilot lost control of the aeroplane: with the right-wing rising, the nose pitched up, so the damage was substantial. The aircraft was repaired at Breckenridge, Texas, and on the completion of the repair work, new yellow overall colours, RCAF markings and her own former serial 20318 were applied. N59TS flew again in 2001 after restoration. On 28th February 2007, ownership changed again, aircraft now registered to M. Shell, of Frisco, Texas.

N59TS was brought across to Europe and on 13th September 2010 and registered with Southern Aircraft Consultancy Inc., thus retaining the registration N59TS while in the UK.

On 23rd August 2014, the aircraft was sold to a private owner in Wuerselen, Germany. On 13th  September 2014, N59TS was registered with International Air Services Inc., of Carson City, Nevada, but flies from Aachen-Merzbruck Airfield in Germany.   On 10th February 2021, ownership transferred to Schmitt Jenna, Juelich NRW.

Aviation historian Brian Jones pulled history together with due credit to the avia-dejavu.net, aerial visuals.ca websites and Stefan Schmoll.