G-BUKY now resides in Germany as of 2016

G-BUKY had quite a remarkable career as a military training aircraft. She must have trained thousands of European fighter pilots over her many years in service. She was built in Canada and then placed in storage in Newark for four years. She was shipped to Belfast in the United Kingdom, assembled and then flown to Germany where she spent the next seven years in the newly formed Luftwaffe! On her De-Mob from the Luftwaffe in 1964 she entered service with the Portuguese Air Force and then it seems all records were lost until 1972 where her story begins again…

The below history has been compiled by Martin Pengelly, Andrew Goodall (Former owner) and more recently Joao M Vidal a former PoAF Pilot who flew 1766 as a service pilot in the 1960’s

By the late 80’s she had been reduced to a wreck and practically abandoned until she was saved from the scrap yard and restored by the now well known warbird enthusiast and restorer, Peter Monk of the Biggin Hill Heritage Hangar. G-BUKY can now be seen flying regularly over the Duxford skies in her immaculate Pacific blue livery sporting her US Navy stars. Below are some of the details of G-BUKY’s history as we understand it. 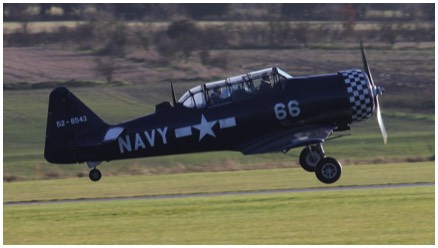 G-BUKY was born in Canada 1953 by Martin Pengelly 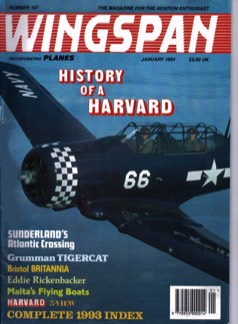 G-BUKY was originally built by the The Canadian Car and Foundry Ltd at Fort William, Ontario in 1953. Changes from the wartime Harvard included modern instruments and avionics, axillary fuel tanks, a canopy with better visibility and the fitting of a spinner over the propeller. 270 were built for the RCAF, with a further 285 being bought by the American government for use under there Mutual Defence Aid Program (MDAP) established in the early fifties to supply modern types to NATO countries that were still using obsolete and in some cases, wartime aircraft.

G-BUKY had the construction number of CCF4 – 464 when it was allocated originally to the USAF with the serial number 52-8543. It was rolled out of the factory on the 5th November 1953. Although technically a Mk. IV (Harvard 4), it was ‘apparently’ given the USAF type designation T-6J that was supposed to apply to all Harvard aircraft supplied under the MDAP scheme. After flight testing had finished it was flown to Newark where it was placed in storage pending delivery over seas. All of the above information was gleaned from the Harvard’s record card obtained from the Maxwell AFB in Alabama, where there are hundreds of thousands of aircraft cards from the thirties to the present day available.

A very rare photograph from David Menard which shows a group of postwar Luftwaffe Mk.4s in their original USAF markings. Third from left to right is 52-8543 which of course is now G-BUKY. Before the Luftwaffe became operational on the 24th September 1956, all Harvard’s were flown with American markings and colour schemes.

52-8543 was delivered in 1957, one of 69 arriving that year, and after being off loaded at Belfast docks, reassembled in Belfast Northern Ireland and then flown to its new home. A total of 120 (Other sources state 135) were supplied each being ‘sold’ under the MDAP scheme for a dollar each. Apparently under the contract number AF-20641 two batches of T-6 were manufactured by the CCF. The first batch consisted of 143 aircraft with 69 going to Italy, 24 to Belgium and 51 to the French Air Force. G-BUKY was built under the above contract number and was in the second batch of 120 aircraft with the serial numbers between CCF4-414 and CCF4-533 and USAF serial numbers 52-8493 – 52-8612. Aircraft with the serial numbers between CCF4-414 – CCF4-533 (120 aircraft) according to accurate records were all dispatched to the newly formed West German Air Force (WGAF) The Luftwaffe.

G-BUKY CCF4-464 was indeed on the second shipment bound for the newly formed Luftwaffe. Its designation however as the T6J is still a matter of debate. According to extensive research completed by Dan Hagedorn written in the book ‘North American’s T-6’ He states that “A great deal of confusion has surrounded the alleged use of the USAF designation T-6J to cover the MDAP – procured Harvard IV aircraft that were built as new aircraft by the Canadian Car and foundry Co., Ltd. (CCF) It seems that the designation of T-6J has gained currency over the years but up to now there has been no supporting evidence of this class. However for the purpose of our aircraft we will refer to it as the ‘J’ as this designation in the 21st century indicates that this aircraft was one of the aircraft produced under the MDAP scheme. 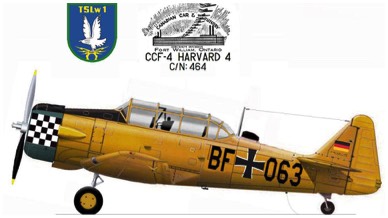 AA+068 flew with the Flugzeugfürerschule “A” (Pilot school “A”) in Landsberg from October 1956/57 Although T-6Js were delivered to France, Belgium, Portugal and Italy, this particular one was delivered to the fledgling West German Luftwaffe.

Their first Harvard’s entered service on 1 July 1955. On that day, temporary flying command, which was later to become the 3736th Flying Training Group was reestablished at Furstenfeldbruk. The new command comprised of the 7330th Flying Training Wing (FTW) with a small number of Lockeed T-33’s, the 7351th FTW at Landsberg with the L-18C Super Cub and the Harvard Mk. IV (Harvard 4) and the 7350th which was a technical school at Kaufbeuren. Her CC&F serial number is 465 and serial 52 – 8545 in her original Luftwaffe training livery. Our T-6J Harvard,G-BUKY was registered as CC&F serial number 464 and serial 52 – 8543, just ‘1’ digit younger on the CCF Serial number. This aircraft must have sat right next to G-BUKY on the production line and also found its way to Belfast harbour before being flown to Germany to join the fledgling Luftwaffe in 1957. She was registered with the Luftwaffe as AA+615/4 where as and again must have flown many times next to our  AA+068 (G-BUKY). This was later put on the civilian register as D-FABU

AA+068 re registered to In 1958 to BF+063
The Harvard was passed to the newly formed Flugkommando der Technischen Schule der Luftwaffe 1 (Aviation Technical School) at Kaufbeuren. This new school specialised in a number of roles including goal setting for new fighter pilot courses, and the training of Air Traffic control (ATC) officers, Navigators, Electronic officers and interpreters of aerial photography. Upon receipt by the Luftwaffe, The Harvard joined its first unit, the Flugzeugfuhrerschule (pilot training school) ‘A’ at Landsberg, where it wore the serial ‘AA+068’ here it was used for training blind, night and formation flying as well as aerobatics and basic combat manoeuvres. Although the Harvard still wore its chrome yellow colour scheme, the serial changed to BF+063 and the engine cowling was painted green with black and white chequer board sides. Picture 1766 Curtesy of Joao M. Vidal Writing Martin Pengelly.

According to ‘Wingspan Magazine’ (c 1994 issue 107) – The German part of the history was extremely difficult to research; the military authorities in Bonn replied that all records were destroyed when the aircraft was struck off charge. The authorities also said that any photography of Luftwaffe machines was strictly prohibited and any pictures were illegal prints. The above information was taken from pilots and instructors logbooks that served at that time in the Luftwaffe. 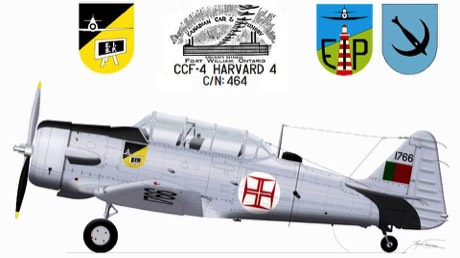 On the 31st July 1964, still under the control of the American authorities, the Harvard was transferred to the Portuguese Air Force, where it was given the serial number 1766. From the original paperwork somebody removed nearly eight years of paperwork and history from the log books – So from 1964 until January 1972, the Harvard’s history was blank. until Mr Joao M. Vidal a former pilot in the Portuguese Air Force contacted me through Facebook…
He had flown 1766 on a number of occasions. From 1965 to 1972 the aircraft ‘was’ based at Base Aérea 7. The colours on the left represent the original PoAF colours of BA-7 – 1766 Curtesy of Joao M. Vidal 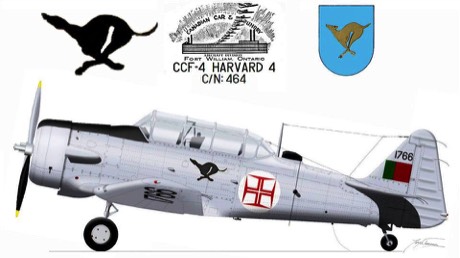 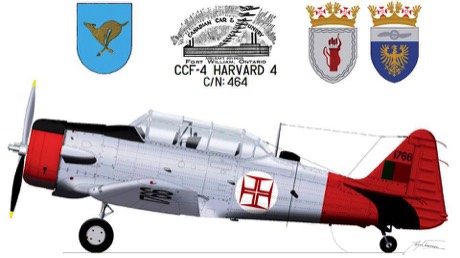 Depósito Geral de Material da Força Aérea. This was the final posting before going to the Museu do Ar which is the PoAF museum – 1766 Curtesy of Joao M. Vidal 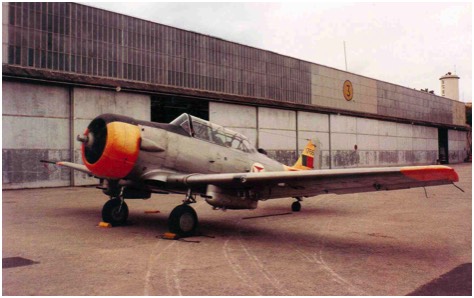 After 15 years of being stripped down and reassembled the trainer was transferred to Museo do Ar (Portuguese Air Force Museum) on 12 November 1990.

1766 prior to her shipment to the UK from the Portuguese museum for private sale. As you can see, the paintwork isn’t in great shape however she is complete and the engine still runs.

The museum for some time had a ‘shopping list’ of types that it would like to acquire including a Hawker Hurricane. As they were unable to locate a real one, they commissioned Tony Ditheridge of AJD Engineering to build a replica. On the 27th July 1990, A FAP Hercules flew in to Stanstead to take the replica Hurricane fighter back to Portugal, But instead of coming here empty, in its fuselage were two Harvard’s, 1766 and Harvard Mk. III 1662. (Now G-ELMH) Part of the exchange deal Tony had made with the museum for the Hurricane replica.

The museum dates back to the Aero Clube de Portugal in 1909 and was created in 1968 in a former-Army’s Military Aviation hangar. Opening for the first time to the public on July 1, 1971. In 2009, due to the growing of the collection, a new site at Sintra was created for the museum and part of the collection was transferred there.The still display Harvard 1769 – Writing Martin Pengelly – Picture 1766 Curtesy of Joao M. Vidal 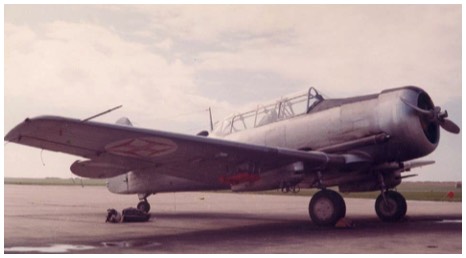 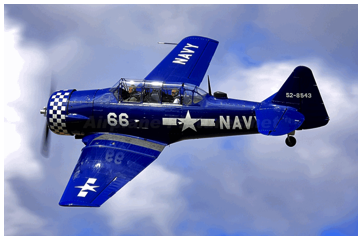 Peter Monk first saw the Harvard in ‘Aeromart’ and started a long restoration project. The aircraft had a zero timed engine and retained many of its original instruments. The colour scheme applied by Peter after hours of paint stripping, isn’t entirely accurate. Peter wanted to paint his Harvard in something different from the normal yellow, camouflaged or Silver schemes already flying in the UK and therefore chose wartime US Navy Pacific theatre colours.

The above article was taken mostly from the feature on G-BUKY by WINGSPAN Magazine (Article number 107 January 1994) with other additions taken from historical records.