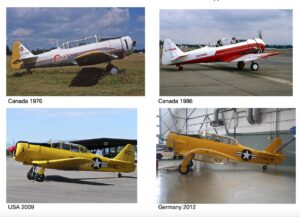 The AT-6 is well known, but less known is the history of these “advanced trainers” (AT) in Germany. The history of Harvard in Germany began on July 1, 1955. The North American AT-6 was built in large numbers, and one of the licensees was the Canadian Car & Foundry. The C.C.F. At the beginning of the 1950s, he produced 270 copies of the training aircraft. The exact name was C.C.F. Harvard Mk. IV

The Harvard Mk.IV corresponding to the North American AT-6 G. What does all this have to do with Germany? Now in the then young Bundeswehr the C.C.F. Harvard Mk.IV its use. In 1956, the aircraft was officially handed over to the Bundeswehr and served in the pilot school “A” in Landsberg. The train was used to the elementary school of budding jet pilots. The German Federal Armed Forces, more precisely the Luftwaffe, purchased 135 aircraft at a symbolic price of $ 1 / piece. This historical background was the main reason for acquiring this beautiful aircraft. 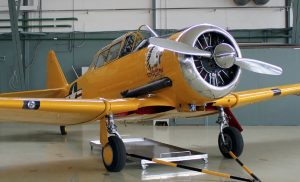 A quote from the Meir Motors web site  – The previous owner Bernd Dietrich at Eggenfelden EDME, commissioned us with a corresponding AT-6, more precisely a C.C.F. Harvard Mk.IV to procure and get ready to fly here. Original Harvard Mk.IVs are quite rare, but we have found this example in the US. The previous owner was none other than Bob Hannah, handling the transport was Bruce Lockwood from Techahapi / Ca… Our mission was to assemble the Harvard and optimize the aircraft. (Information from the  MeierMotors GmbH  web site)