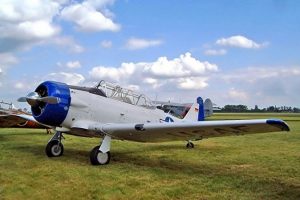 The plane was in the Royal Canadian Air Force in the service until September 1967. Unfortunately, we have no information about the military identification. The flight time in the military service fraud 7552:30 hours. Then there was the aircraft in private ownership until October 1981 and reached a total flight time of 15 hours so 7881:329:15 hours civilian flight time. It was last on the airfield of Summertown, Quebec under the registration CF WPS is stationed. The last Canadian owner was Mr. Aix-les-Bains. After the World Jet aircraft from the company in Fort Lauderdale, Florida has been removed, it was imported and resold to an American in 1989/90. After a further change of ownership, without the restoration of the aircraft was to have begun in September 1994, in Springdale, Arkansas offered for sale. Jürgen Kraus, one of the present owners received from his friend Pete Joyce from Springfield, Missouri the information about the offer.

Tucked into a 40″ vessel container was shipped to Germany in January 1995, the Harvard, where they arrived in the following month. A year later, the engine, a Pratt and Whitney R-1340-to-1, at the company Chester Robert’s supply in Collinsville, Texas.

After the decision was made to buy a Harvard, would be more efficient than a flight after a restoration project at Harvard. The first step of the restoration was of course in an inventory. Fortunately, the plane was in a good general condition. Nevertheless met Jürgen Kraus and Co. the decision to carry out a restoration from scratch, as it did with the stearman also had made some years earlier.

In order to ensure the same high standard of quality as the stearman, was also paid great attention to the smallest detail, be it in historical or aeronautical terms.

The result is, as it represents the different images, you see. All wear parts such as bolts, nuts, rubber parts, electrical lines, fabrics as well as the complete cockpit glazing were faithfully restored, with original parts. The original instruments were ‘brand new’ obsolete. As a concession to the flight safety, the Harvard with new avionics, d. h. Radio, GPS, transponder and a modern gasoline flowmeter.

The restoration had acquired many special tools, as well as some auxiliary frame and structures to be built. Again and again, there were difficulties in the restoration, because there is no ready-to-use Harvard next door in the hangar, in which one could stand to learn. A lot of useful information came from the United States and the United Kingdom. The early acquisition of a complete Repair Manual and Parts Catalog here was very valuable.

All metal parts such as the tail cone, a half-shell construction made of aluminum alloy, have been completely stripped, cleaned and apply corrosion protection. This included the entire middle part, the tier planked surfaces as well as the side panels. Then the parts were painted with zinc chromate and a special clear varnish.

The excellent condition of the surfaces, no re-planking was necessary. With a specially made hot water nozzle, the interior of the Surfaces cleaned and re-sealed. The rear cone as well as the middle part had to part ways with new rivets. All parts such as side panels, inspection plates etc were finished and painted prior to assembly.

The aircraft is in the original ‘Light Gray with blue trim99 motor, rudder and wing tips painted. The fuselage was then connected with the center section and the chassis. Next, the engine installed.

The restoration work was carried out to a large part in the workshop of our gliders clubs “North Star” instead. At the end of 1997, then everything to our ‘home base’, the airfield Aachen Merz Bruck (edka) transports. A friend introduced us to his hangar available, which then was the final assembly.

After many hours of hard work and a long search for parts, found the ‘first flight’ Then in February 1999.