FLYING FROM DUXFORD 🇬🇧 TO BERLIN 🇩🇪 (VIA ARNHEM 🇳🇱) –  “Ride of the Valkyries”

👨‍✈️ The blog – This blog will start off with my initial thoughts on flight planning and preparation for my dash across the channel to the Netherlands and into Germany. As the plan develops I shall add notes to the blog real-time. As we said back in the day in the Army “No plan survives contact with the enemy” Never a truer sentence was ever said!

This blog is a reminder to my self for any future trips across the channel on how to plan and conduct such a flight and to anyone else out there in cyberspace that reads my ramblings. I hope if you are reading this you may pick up some healthy hints and don’t forget KISS, Keep it Simple Stupid! Don’t overcomplicate your planning.

10/08/2020 – Why A warbird to Berlin? – The idea started on the 10th of August 2020 after a prolonged period of lockdown due to the Coronavirus! I hadn’t flow the Harvard for 6 months and I was due to go and fly at the airshow in Turkey… I was pondering my currency and knew I needed to do some display practice before the event… That’s no problem I thought! I then told my self I deserved a little treat for not flying and saving my pennies for the last six months and decided to fly to Berlin! Why not indeed, I deserve it!

I started by looking at all the places still not on the fly to or visit published by the UK Gov web site. I was delighted to see that Germany was still on the OK list! A good reason to fly to Berlin was initially to see the good old G-BUKY Harvard 4 that I used to co-own and the first Harvard I ever soloed and the second reason was a night in Berlin, beer and Schnell Imbis! I could do this trip in the little fuel-efficient Yankee AA1 however bombing along in a warbird, treading the routes of past warriors was something I couldn’t resist. The trip would have to include a couple of laps of “The Bridge too far” at Arnhem on the route to Osnabruck for customs and some gas and on to the final destination, Berlin.

“Remember no plan survives contact with the enemy so all of the above may change as I continue to plan, learn and blog”

10/08/2020 – Initial recce of the route – First things first, I got out the SKYDEMON and checked the route, which looked immediately straightforward from Duxford direct to Berlin however the fuel endurance in the Harvard 4 was limited too ‘4 hours’ before the engine would pop bang cough and stop! So flying at 20 imperial gallons per hour at 1800 rpm, 23 inches of manifold pressure, this would also give me around 120 mph indicated airspeed. I needed an airfield that was about 3 hours away which was the range of my fuel tanks with 1-hour reserve in the bank not to mention the max range of my bladder! 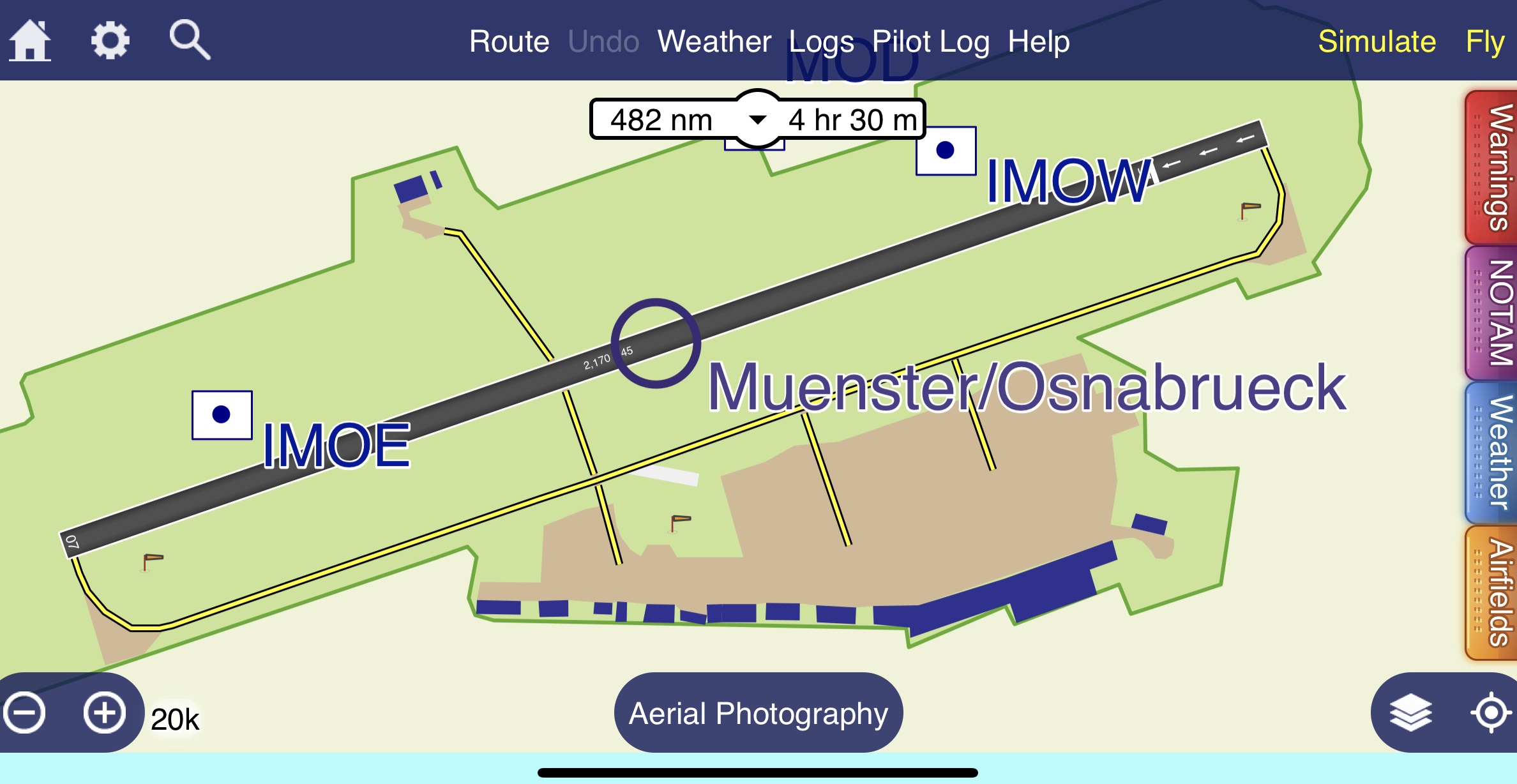 I decided on ‘Muenster Osnabrueck’ just North of Munster as my refuel and customs initial stop. Leaving Duxford looks like the easy part, I have decided on an early take-off which will mean taking off out of hours before Duxford tower opens and speaking only to London information on 124.600 initially before entering the Amsterdam FIR some 50 miles from coasting out at Felixstowe. I will open my flight plan with London information as soon as I have climbed above Duxford’s ATZ before departing on the route.

From Osnabruck to Berlin wind dependent should take a further 2 hours roughly at a leisurely 120 mph indicated so a 5 hour trip in total flight time however adding customs stop and dinner break I guess the whole trip will take around 8 hours to complete, useful information when you want to get to Berlin in time for a good feed and beer! So I reckon as im planning this in September first light should be around 06:30 – I am planning to be sat in the aircraft at 0640 with a take-off time of 0700 hopefully landing in Osnabruck at 10:00. After the customs etc I hope to be in Berlin by 1500 or 1600 at the latest, however as the blog goes on we shall see how my prediction works out! Hoping the weather gods are on our side and we have a lovely High Pressure sweeping over Europe at that time. As I write this the UK has been experiencing temperatures of up to 37.8*C and have had massive thunderstorms and flooding in some parts. Im sure by September all this will have passed, fingers crossed.

“So remember the point about things changing” …..

I have now decided to do the 1-hour flight to the Netherlands and land at Midden-Zeeland…! By doing this it takes out a lot of stress landing at either Osnabruck or Paderborn. I was leaning on the idea of landing at Paderborn as they seemed very welcoming on the phone. Just a quick phone call to Paderborn and they left me with that warm and fuzzy feeling that just by calling about 4 hours in advance plus the Flightplan it would be ok to land and refuel, nice to know!

Anyway, on to Midden-Zeeland, all that is required is a flight plan and also a form filled out that you can easily get offline from there web site called a GENERAL DECLARATION – See this link.  Having looked at the form it is very easy to fill in and once you have completed it you just hit send at the bottom of the page! I think what I will do is screenshot it a few times just as a back up so when I arrive if they have not received it I have the proof that I did, in fact, send it.

11/08/2020 – Registering the flight plan – Today I experimented with Skydemon and set up the flight plan so as to reduce the flap and the self-induced pressure on the day of the flight. This is a valuable lesson in its self as you have to set up your aircraft on skydemon before you can even file the plan and that takes a few minutes to do and work out, especially if you have never filed a flight plan of Skydemon before like me! So as a reminder for myself in the future and for the reader – Go to the “wheel” on the top left of your Skydemon page and click on “aircraft” Then it will say “add aircraft” Follow the instructions and then follow the steps. You will then able to register your aircraft and file the flight plan in that order.

The next screen is all about departure times, Skydemon will not let you file a flight plan unless the departure time is more than 5 minutes ahead but less than 5 days ahead. Once you have completed all of the above steps the software will allow you to check the destinations written in codes of the airfields that you will depart pass and land at and then once you are happy press send!

German Customs –  When talking about German customs im talking about the police not drinking beer wearing leather Lederhosen! After a 5 min search, I realised that when landing in the Fatherland you need to clear customs so I chose Muenster Osnabruck as it has 24-hour customs available. I called them today just to check and they said “Just call by telephone 3 or 4 days before departure and they would inform the relevant customs authority. This all seems quite straight forward and as the Osnabruck airfield is class D airspace I also asked how difficult it was joining at such a bust airport? The reply on the phone was “It’s easy” so this we shall see!

Crossing the channel – This is my biggest concern as iv never done this before and I need to be clear who to speak to and who would they hand me over too etc?  I found the AIP for the Netherlands (Left) ENR 6-2.2 and found it shows the necessary information. It shows the Amsterdam FIR boundary and states 124.300 as one of the frequencies. Having double-checked that with my Skydemon which gave a confusingly different frequency of 136.650 so I must investigate further! I am sure though that London Information will tell me who to speak to however its nice to plan in advance to I can set up box 2 on the radio.

So now I have the plan I just need to decide on a date and time to to make the trip and prepare my other equipment for the flight and choose the passenger to accompany me which at the moment seems like it’s going to be one of my oldest mates from the Paras Dr Ben, always handy having a Doc on board!

11/08/2020 – Kit and equipment – Survival equipment is my forte so I am used to this type of risky environment and how to prepare for it. Going 100 miles over the English channel in a 70-year-old warbird with a single-engine has its hazards. The temperature of the sea in September is around 18*C and when you think that the human body temperature is supposed to stay at 37*C you can see a definite difference especially at the body does not operate well below 24*C – Research concluded that: “For lean, elite-level swimmers, 16°C and 18°C will cause hypothermia in under two hours so if you end up in the drink you need to get recovered as soon as possible.

So to that end, a life jacket is a must and a good one at that! In my life jacket, I have a dye marker that will stain the water green to aid search and rescue and also a personal locator beacon on the 406 MHz Emergency Distress Signal with LED Strobe and Infrared Strobe, Global Coverage / Cospas-Sarsat / MEOSAR, GPS and Galileo GNSS. This is tied to my Mae West and is easy to operate. Unfortunately, we have not got a dinghy as there is no room in Harvard for one. Back in WW2, they would have had seat pack dinghies however modern seat pack dinghies are very difficult to get hold of if not impossible. To get over the fact I don’t have a dinghy I have a type of military immersion suit, its more of a buoyancy exposure suit however it’s proven to aid buoyancy and does help to keep the torso warm however its not a completely sealable dry suit.

So that’s it really on the kit and equipment side of life. There is one point to note that a T6 Harvard does not ditch into the sea very well so that’s also a consideration, to ditch or jump? We shall be flying at 5000 feet initially and wearing parachutes. If the engine quit I would achieve the best glide attempt a restart however if this was not possible and the aircraft has died completely it would make sense to bail out over the side and land by parachute into the water than risk ditching and killing your self in the process. This isn’t everyone’s idea of how to do things but when you have two ex-Red Devils in the aircraft it seems totally logical!  If you are interested in bailout procedures please click on this link to my manual “To Bail or not to Bale, that is the question” Any questions so far?

Now for the real blog! Everything below will be real-time. From the moment I arrive at the aircraft at Duxford to landing in Germany will be blogged about….. Look forward now to September the 16th which is the proposed flight date.