N13FY – based in the Netherlands

The aircraft was withdrawn from military service on 1st March 1955 and was sold to Anders Botved of Copenhagen, and on 26th May 1955, was registered as OY-DYE.  It was converted as a ‘sky writer’ with the rear seat removed and replaced with two oil containers, two pumps and a large smoke outlet.  When at operating altitude, oil would be injected under pressure onto the hot exhaust manifold, causing it to vaporize into dense, white smoke, creating white stripes into the sky.

On 4th April 1956 registration OY-DYE was cancelled on export to West Germany.  It was registered on 8th May 1956 to Deutscher Luftfahrt-Beratungsdienst as D-IGAL and continued to be operated as a sky writer.  With a change of category registration rules regarding weight and number of engines, with effect from 1st July 1957 the aircraft became D-FGAL.  Shortly before the UK banned aerial advertising, D-FGAL  spent a few days at Newcastle, 4th– 6th October 1959, having arrived via Southend.  While at Newcastle, it was observed skywriting “New Anglia” – promoting over Tyneside the new Ford Anglia launched only months before. Registration D-FGAL was carried until cancelled on 14th June 1961 as exported to the Netherlands. 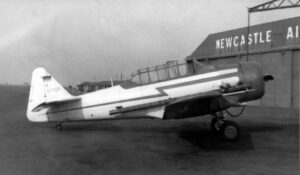 Quickly re-registered two days later as PH-NKD with J. Daams of Loosdrecht and based at Hilversum airfield.  On 23rd June 1976, it was re-registered with Skylight BV of Loosdrecht and continued to be active advertising various products, including soft drinks and cigarettes, across the skies above Europe.  After a fair few years of employment as a skywriter, the aircraft was retired, sold, and the PH-NKD registration cancelled on 18th August 1993.

The new owner set about a complete overhaul, including removing all the ‘sky writer’ equipment, installed back in 1955.  It was intended to restore the aircraft onto the Dutch register as PH-NKD. Still, after a struggle with the Rijksluchtvaart Dienst (RLD – the Dutch CAA), the owner opted to register the aircraft in the USA as N13FY (the ‘FY’ apparently presenting a ‘f**k you’ message to the RLD).  During this overhaul, the silver fuselage with yellow outer wings skywriter scheme was replaced with an ingenious overall dark blue USAAF scheme with tail serial 16544 with yellow rudder and large ‘FY’ side code.  An Airworthiness Test was flown on 7th September 1994. A new Certificate of Airworthiness issued to owners, Vintage Aircraft (Leystad) Inc.  Ownership, was transferred to Eastern Stearman Inc, Trustee on 10th July 2006, the aircraft being operated by Hanno Wesdorp, based at Hilversum and current 2020.

Over the years, N13FY has been widely seen across Europe attending and displaying at Air Displays and events.  A visit to the UK in July 2009 included an appearance in the static park at the RNAS Yeovilton Air Day.  A slightly embarrassing appearance was during a Dutch “Wings of Freedom” event at Ede on 21st August 2019 when the aircraft was landed short of the flying field area due to misinterpretation of the display line markers as runway markers.  After being transported across a ditch, the aircraft was taxied onto the temporary airfield area without damage.

History pulled together by aviation historian Brian Jones, with due credit to the avia-dejavu.net website.