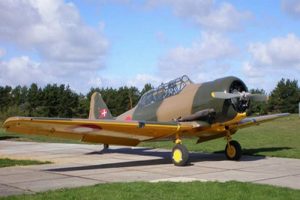 Harvard is a 2-seater training aircraft that was put into production in 1938 for delivery to the US Army Air Force as a modern training aircraft. During World War II, when the Harvard made its final breakthrough, more than 14,000 Harvards were built, of which approx. 1,800 were manufactured by Noorduyn Aviation Company in Canada.

The original American name for the aircraft was TEXAN, but during the many deliveries to Canada and England, the aircraft was called Harvard. After the war, the many remaining Harvards were delivered to nearly 50 different countries as training aircraft. In 1946, 46 + 10 Harvard IIA aircraft were purchased from the RAF for the reconstruction of the Danish Air Force. In 1949 another 5 Harvard IIB were bought and in 20 pcs. The TEXAN T-6D was shipped in 1950 as a weapons aid from the United States. Harvard was in Danish service until 1959 – 1961, when the planes were phased out.

Harvard number 306 (ex. RAF FH114, USAF 4212501) was acquired by architect Jørn Utzon as a toy for the children. In 1978, Utzon handed over the aircraft to the Danish Aviation Museum. The machine has been restored for exhibition with the help of a group of aircraft technicians and enthusiasts based in the Copenhagen area. The Harvard 306 was handed over to the Air Force’s Historical Collection in 1998; but is still exhibited at the Danish Aviation Museum.