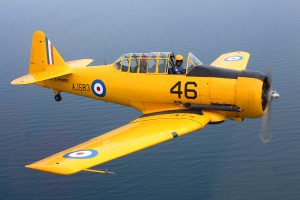 Manufacturer: North American Aviation, Inglewood, California
Entered Service: July 29, 1941
Disposed of: June 21, 1960
Served: No. 31 SFTS, Kingston, Ontario; Gimli, Manitoba —
–
–
Originally ordered by France, but was taken on strength by the British Royal Air Force (RAF).  It’s believed to be one of the aircraft dragged across the Canadian/American border by a team of horses under the guise of not violating the US Neutrality Act prior to the US entering the war in December 1941.  HWX was transferred to the RCAF in 1943.  This aircraft was purchased by J.P. Rheault of Trois-Rivières, Quebec in 1961 for $750 and flown in the St. Maurice Aero Club by Alex Kennedy of Trois-Rivières, in 1965.  Acquired by Dr. John Cowan in 1966, HWX was a winner in the 1968 Cleveland Air Races.  This aircraft was obtained by CHAA in 1986 with the generous assistance of Dr. Cowan.  It was repainted to BCATP colours in 1989 with the support of BASF.