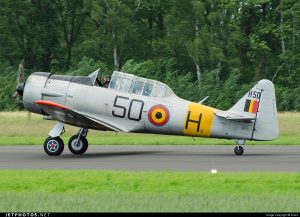 Built-in 1944 as an AT-16-ND by the Noorduyn Aircraft Company at Montreal, with constructor’s number 14A-1494. As it was built with Lend-Lease funding, it was allocated the ‘paper’ USAAF serial 43-13195 and was readied for the Royal Air Force as FT454 a Harvard IIB.

After service with the R.A.F., FT454 was one of a large number of surplus to requirement aircraft transferred to Holland during September 1946 to March 1948 to help the re-establishment of the KLu – Koninklijke Luchtmacht (Royal Netherlands Air Force).  Initially retained the RAF serial, but shortly became B-84.  In March 1966 transferred across to the MLD – Marine Luchtvaart Dienst (Dutch Navy) with serial 098, where it was known as a type UT-6 and likely served with No.9 Squadron at De Kooij.

Sold and registered in Belgium on 4th August 1972 as OO-DAF to Eric Vormezele.  For many years it retained its basic Dutch pale yellow overall, with a red cowling and the civil registration in large black lettering on the fuselage side.  Sometime before 2003 it was repainted as H-50 in full Belgian Air Force markings on silver overall.  Noted early 2020 still wearing this smart scheme.