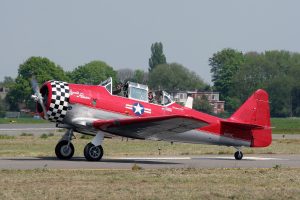 N4109C – 7727 was first registered ZU-AGC and flown for a couple of years in South-Africa. In August 1994 she was airfreighted to Belgium and registered N4109C. In the early years she wore a red colorscheme and had the name ‘Seaview Princess’. She was operated by the Stampe Museum in Deurne/Antwerp in Belgium.

In 2011 she was repainted in Belgian Air Force as ‘H-210’, the colors of the aircraft of Lt.Baudouin de Changy, which he was flying when shot down on July 17th, 1960 during a mission over the Congo (Congo-Kinshasa). In an attempt to destroy a machine-gun position he was hit and had to make an emergency landing, which he survived. While trying to climb out of the cockpit he was murdered by the rebels and his body was thrown in the river…. 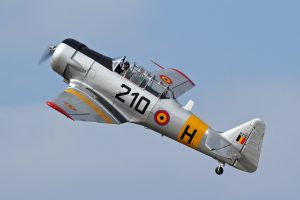 N4109C – The painting of N4109C was done by the paintshop of 10 Tactical Wing at Kleine Brogel, Belgian Air Force. As these guys did not have the habit of painting civilian aircraft they ‘forgot’ to paint the civil registration on the aircraft. A few weeks later ‘N4109C’ was later added, regulations need to be followed. Currently N4109C is still in the care of the Stampe Museum and regularly flown. Interestingly after the turmoils in the Congo some of the remaining Belgian Harvards were acquired by South Africa… (Information by Laurent Heyligen) 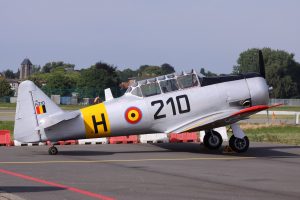