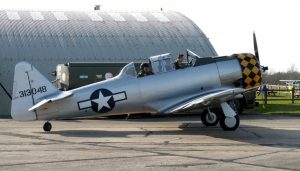 The aircraft was one of a hundred AT-6Ds loaned by the USAF to the RCAF from May 1951 to meet their requirement for advanced trainers pending delivery of 270 Canadian new-build Harvard 4s. The aircraft was taken on strength by the RCAF on 12th May 1951 and struck off charge 16th October 1953 on return to the USAF. Because the aircraft had only been on loan it did not receive RCAF serial numbers during the loan period and retained the USAF serial number 44-81506.

The aircraft was acquired by the Panamanian Air Force in 1954 from USAF surplus stock. Subsequently, after service in Panama, the aircraft went onto the American Civil Register on 18th October 1967 as N7231C.  Civilian ownership in the USA requires research.

David Nock acquired the aircraft, still registered as N7231C in May 2009. The aircraft was then taken to Midwest Aero Restorations Ltd for a full restoration which was completed in July 2011.  By now N7231C was painted in the exact markings of a USAAF 8th Air Force, 353rd FG Station ‘hack’, as based at Raydon in Suffolk in 1944 and carried the tail serial 313048.  Silver overall, with a distinctive black and yellow diamond design around the cowling.   Such was the quality of the restoration that at the Airventure Oshkosh convention 2011 it won the Reserve Grand Champion WWII award and Snap-on Tools Corporation’s Golden Wrench award.The aircraft was imported into the UK by owner David Nock; the registration N7231C was cancelled on 5th June 2012, before transfer onto the UK Register as G-TDJN on 12th June 2012, retaining the smart USAAF colours applied on the rebuild.  In the UK mainly flown from Halfpenny Green.

The UK registration was cancelled with the CAA on 29th November 2019 on transfer to the Belgium civil register.  New owner’s, Safety Jogger Shoes cleverly registering the aircraft as OO-JOY and it is flown by Stijn de Jaeghere.  The well researched and applied USAAF scheme now has the slogan ‘Safety Jogger shoes’ boldly added to the fuselage side below the canopy.

(The basis of this history was for a while on the website of Halfpenny Green Airport, but found repeated on a Dutch website and pulled together by Brian Jones, aircraft historian.)