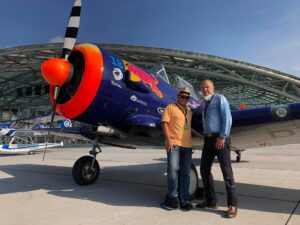 2020 – D-FHGK has been sold to Austria. Walter Eichhorn and Florian Hose ferried the Harvard to the Flying Bulls in Salzburg. RedBull / Flying Bulls now own and operate her. She is no longer in Germany.

1947 – In 1947 it was sold, most probably, through Charles Babb Co. / Montreal via the Netherlands to the Swiss Airforce. It was there as U-322.1968 the Swiss Airforce sold a lot of MKIIb Harvards including U-322 to civil operators.

1969 Registered on 27th March as G-AXCR with the new owner Mr Osborne / Blackbushe, it was delivered from Switzerland to Gatwick on 13th April. Still in allover silver with swiss markings.

Sold in September 1969 to “Flugzeug Handels Gesellschaft Karlsruhe” (FHGK) and operated for demo/display and training flights until 1971 in Karlsruhe (EDTK). Still allover silver without special markings.

1971 it was sold to Mr Röth in Mosbach- Lohrbach (EDGM) and operated privately. Painted in camouflage colours with orange markings. 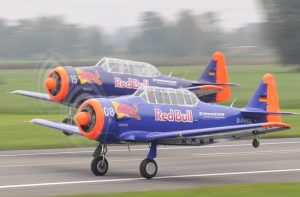 1978 on Walter Eichhorn flies and owns the Aeroplane. It was first based in Breitscheid (EDGB) & Siegerland (EDGS). Now it is Based in Elz (EDFY). It was painted blue in the 1990s with the well known orange and the Red-Bull markings. Forming the legendary AT-6 father & son formation aerobatic team for about 20 years, Walter & Toni Eichhorn (D-FHGL) are more than well known for their immaculate aerobatic displays until 2012.