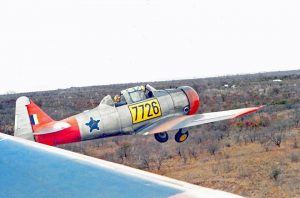 Was originally a AT-6 or a SNJ and then rebuilt into a T-6G in 1953. Not given a 182- c/n, it was one of 30 created by Volitan Aircraft Services in California of which all were given SA- c/ns ranging from 052 to about 080. Therefore there is no way at present in knowing what the original airframe was. Sold in Chile in March 1993 it first became N26WR before N726KM which it is now. (Martin Pengelly Harvard Historian) 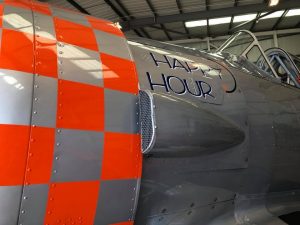 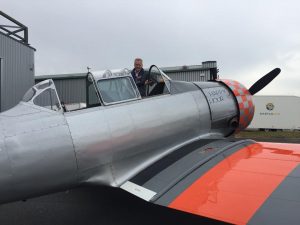 North American T-6G Texan ‘Happy Hour’ is the latest arrival at Turkey’s Sivrihisar General Aviation Center. It fills an important gap between the organisation’s Stearman biplane and North American P-51D Mustang ‘Ferocious Frankie’ – the latter previously operated in the UK by Duxford’s Old Flying Machine Company. The 1953-built Texan left Gloucester Airport on August 9 in the hands of pilot Guido Kililng (with Sivrihisar’s Tayfun Uslu in the other seat). It arrived at its new home on the 11th.

All images by Tayfun Uslu.

SHG Airshow is an international organization organized annually by Sivrihisar Sportive Aviation Society at Sivrihisar General Aviation Center Necati Artan Facilities and it addresses the aviation fans from every age. Besides emphasizing the significance of the aviation culture.

SHG Airshows offer an opportunity to gain knowledge about aviation culture especially to children and young people. This organization which came to life first in 2015 attracted great attention, developed year by year and became an internationally well-known organization. Today, it is mentioned as SHG Airshows in the international calenders that declare international aviation shows.

SHG Airshows aims at contributing to the development of the sportive and general aviation in our country, exhibiting the planes with a historical worth at MSÖ Air and Space Museum to the aviation fans and supporting the development of aviation culture. For these purposes, this organization unites tens of thousands of people and excites and entertains them with various shows.

SHG Airshows lasts for two days and during this organization, the world-wide known show pilots make magnificent flight performances which both excite and also fascinate the spectators. Planes with historical worth exhibited at MSÖ Air and Space Museum provide information about aviation history with their static and dynamic performances. Besides the show pilots, many companies, flight schools, universities and aviation firms participate in this organization in order to present and advertise themselves.

Ali İsmet Öztürk (born 23 May 1964) is a Turkish professional display pilot, an aerobatic aircraft designer and an aviation businessman. He is the first civilian to be recognised as a professional aerobatic pilot in the country. He flies in international air shows in his custom-designed and manufactured world-class performance aerobatic aircraft called “Turkish: Mor Menekşe” (Purple Violet

Ali İsmet Öztürk has been admired worldwide both for his accomplishments in the air as an air show pilot, and on the ground for his technical talent to build aerobatics aircraft. He is best known by air show fans and enthusiasts for his extremely complex and technical manoeuvres. He was also the first professional civil pilot to perform an aerobatics display over the Bosphorus

Foreign companies join this organization in order to make the marketing of their sportive planes and some other products. Therefore, SHG Airshows gain an “Aviation Fair” identity as well. In order for everyone to have fun, playgrounds for children and various flight simulators which attract the attention of young people are constructed. “Bicycle Races” on the airfield and “Aviation Photograph Competition” which are both one of the “firsts” of Turkey and also conventions of SHG Airshows also take place in the organization programme.

At SHG Airshows, a volunteer team of approximately one hundred people work during the showtimes and thus, this organization unites many people who want to contribute to the development of aviation culture. In addition, this organization becomes an efficient source for many local companies since food stands are constructed in the show days and participators and visitors stay at the local hotels around. 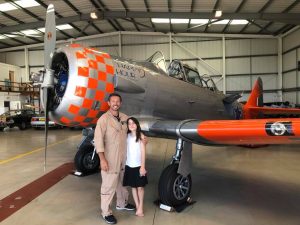 My own small experience with Happy Hour before her departure from Gloucester! Author and owner of this web site Andrew Goodall with daughter Millie