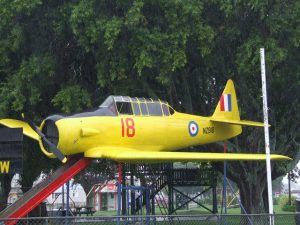 Issued to NZ under Empire Air Training Scheme.
Shipped to New Zealand on “Limerick” in May 1941 and assembled at Hobsonville. BOC 20 May 1941.
To No.1 SFTS Wigram.
To No.2 SFTS, Woodbourne by March 1944.
Converted to INST135 for CMT trainees at Taieri in April 1950.
Later transferred to Hobsonville.

Purchased by Jaycees and installed in childrens playground at Pahiatua in November 1963.
A news item in the NZ Herald dated 08 May 2003 noted that the town of Pahiatua was raising $5000 to spruce up the aircraft which is still in the playground and has become the town’s icon. 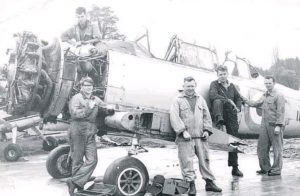 Pahiatua’s original Harvard in the Main street playground.
The complete (little known) story of how the Pahiatua Harvard got from Te Kuiti on the 25th of May to the Playground on the 18th of October 1963.
(writen by Jaycee correspondent John White for the North Wairarapa News 1963, transcribed by Paul Lea 14 May 2017).
”Harvard Aircraft For Childrens Playground”.
At 2 am on Saturday May 25 Tom Findlay and 8 keen Jaycees left Pahiatua for Te Kuiti. Their aim was to dismantle an Harvard aircraft bought from Bennett Avation, pack and bring it back home to be reassembled and erected in the children’s playground.
Their short stay in Te Kuiti was highlighted by local Jaycee’s hosting them for dinner and helping with the loading of the aircraft. This was completed by Saturday evening and at 7 o’clock, on Sunday morning the aeroplane securely tied down on Tom Findlay’s transporter began the trip to it’s new home finally arriving in Pahiatua at 6 o’clock that evening.
Already work has commenced on converting the Harvard for the playground and when completed it should bring pleasure to many a young heart. 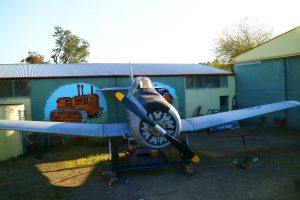 Five Months later……”Jaycee’s Complete harvard Project”.
After 5 months of work by the Pahiatua Jaycees a Harvard aircraft has at last been installed in the childrens playground.
The Harvard which was purchased from Bennett’s Avation in Te Kuiti was dismantled there on May 25th and loaded onto Mr Tom Findlay’s articulator which he donated for the occasion.
The next day the aircraft was bought to Pahiatua and placed in one of Eric Gleeson’s sheds for work in converting it for use in the childrens playground. With project convener Joe Ridley and playground convener Jack Cotter organising, the work was soon under way. One of the hardest jobs was the sandpapering of the whole plane, this taking a dozen Jaycee’s some 6 hours. But, as the months passed the finished plane gradually took shape under the eagle eyes of Joe & Jack.
The modifications were carried out by Jaycee labour and everyone pulled their weight to make the project a sucess.Most of the work on the Harvard was done at night and we have Eric Gleeson to thank for this as we had the use of his shed and power. Without it the work could have only been done in the weekends.
The slide and mountings were made by Joe Ridley Engineers and a working bee concreted in the first of the mountings which was on October the 12th. 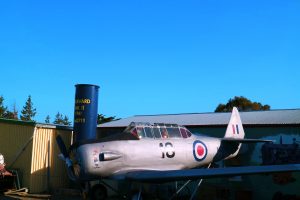 On that morning 18 Jaycees bodily lifted the Harvard onto a lorry and it was carried to the playground where, with the aid of a tractor loader and the muscles of Jaycees, it was lifted to a height of 8 feet off the ground to be bolted and concreted in position.
A fine peice of spraypainting by Jaycee ”Snow” Greaves finished off the installation and left very little to be desired.
One thing that made work a great deal easier was the co-operation of Sgt Clements in letting us use his hot point to run power over to the playground for the use of our drills.
It has been the co-operation of all those who loaned equipment and facilities that have really made the project go so well. Also the support of the general public of Pahiatua in assisting us in our fund-raising and our donations through our many projects for fund-raising have put the plane where it is today. Without this support this project could not have been possible.
An estimate of the cost of the complete project would be between four and five hundred pounds, taking into concideration the 250 man hours worked by Jaycee’s, not to mention members of the public who assisted us along the way. 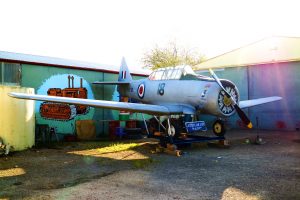 In placing the Harvard in the playground we also hope to make it a landmark by which Pahiatua can be recognised. This has certainly proven the case as there is hardly a car entering the town that does not slow down and stop for a look.
The original number on the Harvard is NZ918 and since it has been repainted on the fuselage one of our residents on looking up his log books from his Air Force days has discovered that he has flown it. He is Mr Graham Reid. Graham found he had flown the harvard in August and September 1944 when he was stationed at Woodbourne near Blenheim. This was certainly a thrill for the Reid family, especially their children, who first asked their father out of curiosity. The finishing touches were done to the project in the weekend when Jaycee Paul Gleeson finished the signwriting and the propeller was fitted.
Resources – http://www.adf-serials.com.au/nz-serials/nzharvard.htm?fbclid=IwAR0O5A-S1JFXiMXb6mpx48pP53aQeslv3MuIx9vzMV27gUfuIgjo-wg3UyA
https://www.facebook.com/PahiatuaAndDistrictPicsOldAndNew/posts/pahiatuas-original-harvard-in-the-main-street-playground-the-complete-little-kno/1751215991560607/