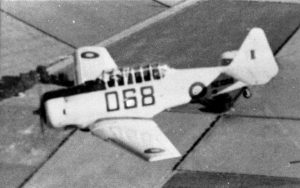 Previously KF410. From RAF.
Shipped to New Zealand on “Empire Castle” in September 1944 and assembled at Hobsonville.
BOC 10 October 1944.
Converted to INST138 at TTS Hobsonville 19 January 1950.
Sold by tender from Hobsonville in August 1965 in unairworthy condition and used in childrens playground at Morrinsville.
Purchased by R. Jowitt mid 1985 and stored at Ardmore.
To Southair Aviation, Timaru.
Sold by receivers of Southair to unknown buyer.
Swapped with RNZAF Museum in exchange for parts to return NZ1040 to airworthy condition.
In storage at RNZAF Museum during 1990s.
Presently stored at Ardmore with Greg Ryan.

The RNZAF operated 202 Harvards (NZ901-1102) of various marks (NZ901-1005 Mk.II, NZ1006-1057, NZ1070 MkIIa, NZ1100-1102 MkIIb, and NZ1058-1069 NZ1071-1099 MkIII) delivered in the period from 1941 to 1944. Some of these were contracted by the RNZAF, while others were issued as part of the Empire Air Training scheme. The aircraft have been used in training, communication and FAC roles. 53 aircraft were lost through various causes during WWII. The majority of the Harvards were put into storage in 1945, and many were sold for scrap in 1958-59. Remaining Mk.II and Mk.III aircraft were modernised between 1955 and 1957. Thirty-five aircraft were utilised as instructional airframes. The last 19 airworthy aircraft were withdrawn in 1977, and subsequently sold along with 13 aircraft that were in storage. These aircraft provided the nucleus of a developing warbird scene in New Zealand in the 1980’s

Five Harvards remain with the RNZAF:

Nearly 50 ex-RNZAF Harvards are now in private hands in New Zealand, and overseas. At present (July 1, 1998) 16 are airworthy in New Zealand. Formations (I have seen up to ten) can be seen at various airshows, and the ‘Roaring Forties’ Warbird association display team peforms regularly in New Zealand (and occassionally overseas).