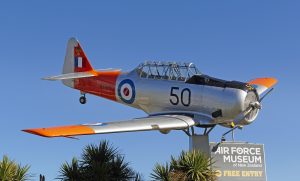 The Harvard which can be seen at the entrance gate to former RNZAF Base Wigram, and that now acts as gate guard for the RNZAF Museum, is NZ1050. This aircraft was shipped to New Zealand onboard the “B.J. Wheeler” in July 1943 and was assembled at RNZAF Station Hobsonville.

It was Brought on Charge on the 19th of July 1943. It served with No.2 (Fighter) Operational Training Unit, at RNZAF Ohakea. It became the twenty fifth Mk IIA to be converted to Mk 2A* sometime between August 1954 and May 1957. After serving at Wigram as a trainer, it was then stored at Woodbourne from September 1972. The aircraft was converted to become instructional airframe INST207 on the 20th of February 1973. 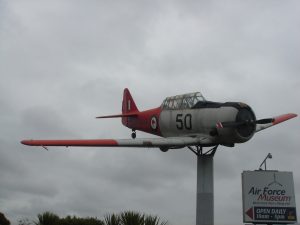 However money was raised by an Air Force veterans group who wished o mark the 50th Anniversary of the establishment of the New Zealand Permanent Air Force in 1923. So the Harvard was chosen to be repainted as NZ1050with the funds raised into the overall yellow training colours, with “050” in large red numerals on the sides. It was then transported to Wigram to be mounted as the gate guard, and was unveiled officially on the 50th Anniversary of military aviation in this country, on the 14th of June 1973.